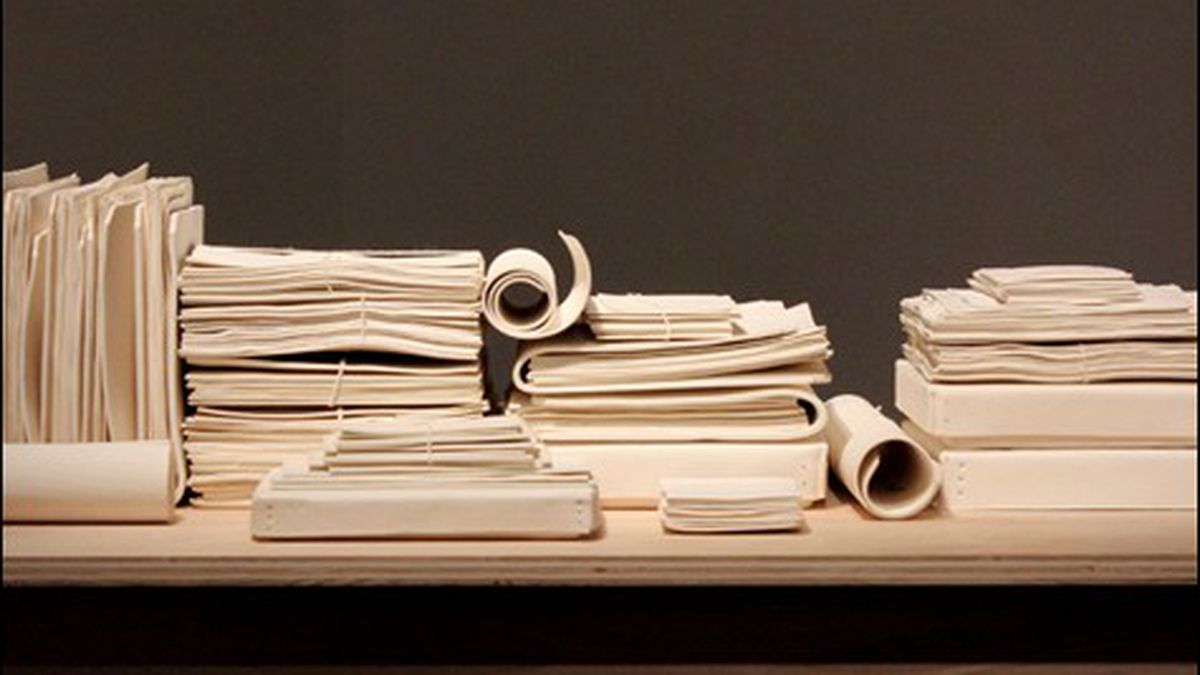 Domains of the Sea

There is an irony in this title that aligns with Moore’s implication in “A Grave”: The sea, being at every turn forbidding of human penetration, could never abide anything so tidy as a “history.” Its variable, reflective surface obscures what is beneath; go deeper and light fades to black. All we get are glances.

Of course, an oceanographer or marine biologist would call these surmountable challenges. Osborne, however, approaches the subject with a more artistic sensibility: “This quality of getting only glimpses and not being to grasp everything, what we know in contrast to what we don’t know, applies to everything — the flow of human history and the experience of our own lives, as well as the experience of art,” she said, “which makes the sea such an interesting image to work with.”

In many of the works, the guiding metaphor is sea as text, albeit an unreadable one. For instance, we find three 8.5-by-11-inch porcelain “pages” that bear not words, but patches of organic-looking protrusions resembling underwater flora or perhaps the tentacles of an anemone. On another such page, Osborne has placed fifteen hand-molded cubes of dried kelp in three meticulously arranged rows, suggesting a museological or textbook style of display that would typically come alongside an explanatory caption, but here remains wondrously blank, allowing the complexities and variations of the kelp itself to hold the viewer’s gaze.

Pushing farther into the gallery, the viewer finds some of the exhibition’s most impressive work: neatly piled stacks of what appear to be, for lack of a better word, stationery — carefully tied bundles of letters and accumulations of paper cards and sheets, some rolled into tubes. “The Archive,” a table laden with such artifacts, could be the workstation of a 19th-century man of letters. One can’t help but contemplate what personal correspondences the envelopes might contain, what business the documents describe. Of course, the answer is “none”: These sculptures are only porcelain simulations — as opaque as the mound of oyster shells against the adjacent wall.

Osborne has achieved a clever reversal, then: from seeing the sea as a blank text to understanding this arrangement of blank text as a sea, in the poetic sense — not the oceanographer’s sea that we can strive to “know,” but the sea that we respond to emotionally, perhaps as the mysterious source of our moods, perhaps as a grave, perhaps as just a place to let the imagination wander. The History of the Sea runs through December 29 at Hatch Gallery (492 23rd St., Oakland). 510-798-6566 or HatchGallery.org

Foreclosures and Defaults Continue to Rise