1. State Senate leader Darrell Steinberg is proposing to spend $200 million for rehabilitation and drug and mental health treatment as an alternative to Jerry Brown’s $315 million plan to ship inmates to privately owned prisons, the LA Times$ reports. Steinberg said that Brown’s proposal had no chance of gaining approval from Senate Democrats, but the governor and Assembly Speaker John Perez quickly criticized Steinberg’s proposal as being “irresponsible.” Brown also doesn’t like the fact that lawyers for inmates who sued the state over its overcrowded prisons support Steinberg’s plan. 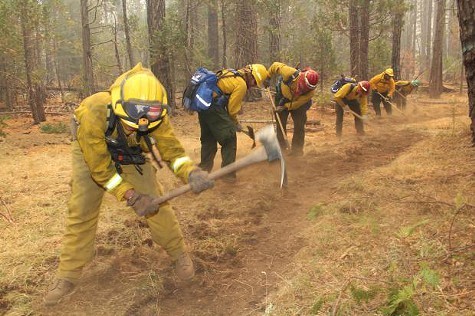 2. The cost of fighting the massive Rim Fire in the Sierra has reached $39 million and is expected to grow much higher, the LA Times$ reports. The tab, however, does not include the costs of lost tourism and the destruction of the popular Berkeley Tuolumne Family Camp. State fire officials also said they hope to fully contain the state’s sixth-largest ever conflagration by September 10, as higher humidity and lower temperatures have boosted efforts to battle the blaze. As of this morning, the 193,000-acre fire was 30 percent contained.

3. The Oakland Police Department’s recent attempts to implement its Ceasefire crime reduction plan appear to have been little more than a botched public-relations effort, the Chron reports. After holding press conferences to announce arrests, and then refusing to identify alleged gang members arrested in Ceasefire sweeps, the department released the names of suspects who were not arrested as part of Ceasefire.

4. Numerous environmental and liberal groups called on the governor to reject a weak bill to regulate fracking in California and instead implement a moratorium on the controversial oil and gas-extraction method, the LA Times$ reports. The issue, however, has divided the environmental community with some environmental groups supporting the weak regulation bill — SB 4 by state Senator Fran Pavley — because they do not believe there enough votes in Sacramento for a moratorium.

5. And San Francisco, along with some Peninsula and South Bay cities, is about to launch its groundbreaking bike-share program, which will allow commuters to share bicycles from transit stations, the Chron reports.

Facebook
Twitter
Linkedin
Previous articleWednesday Must Reads: OPD Disproportionately Targets Black Youth; Larry Reid Decides to Not Run for Mayor of Oakland
Next articleGovernor May Sign Bill That Would Make It Tougher to Fire Dishonest Cops