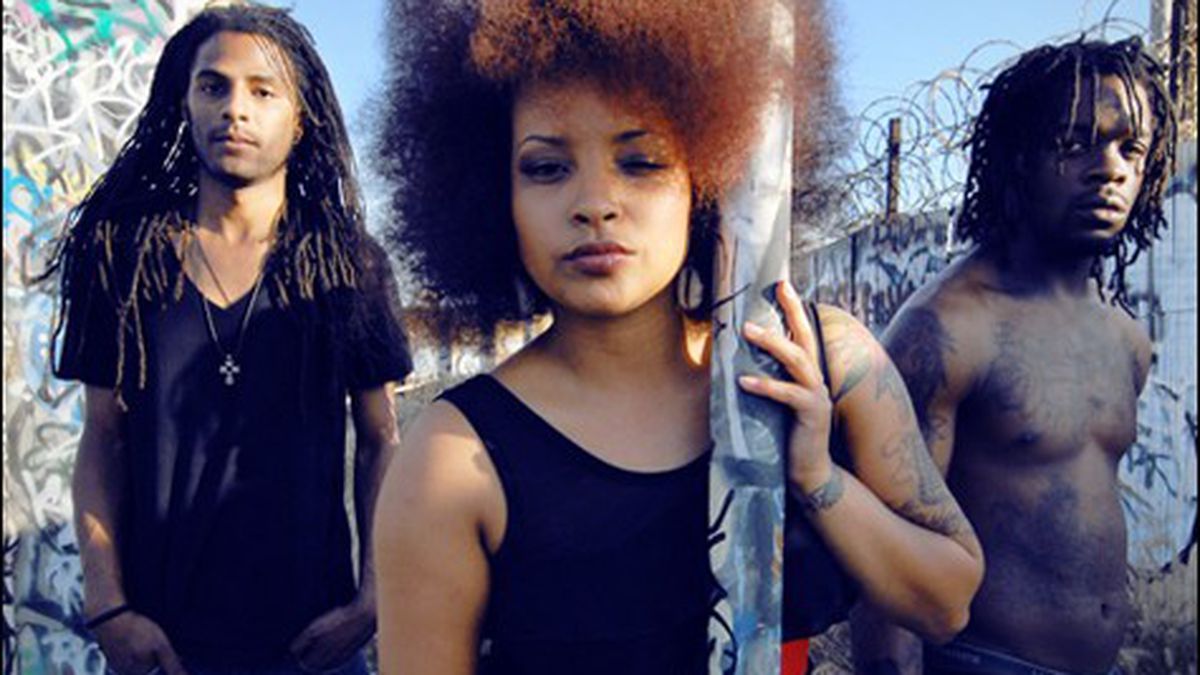 It wouldn’t be an overreach to say that The Memorials are the rock group we’ve all been waiting for. Not just because the core members hail from Richmond, or because they do the Afro-punk thing really well, or because the band’s main architect, Thomas Pridgen, used to drum for The Mars Volta. Really, it’s a concatenation of all those circumstances. More importantly, it’s the band’s ability to drift between genres. Drummer Pridgen and singer Viveca Hawkins met in church when they were twelve years old. Now in their late twenties, they both sport sleeve tattoos and favor music with fast, pulverizing guitars.

To Pridgen, that combination is completely outré. He said that even with the growing hype around “Afro-punk,” or Lil’ Wayne brandishing his electric guitar onstage, there’s still a deep rift between so-called “rock” and so-called “urban” styles. “It’s not a lot of people playing rock from a black perspective,” he said. “It had to be some people that come out and be like, ‘Dude. I’m from the ‘hood. I’m from the same neighborhood as everybody else who slang crack, and listen to rap, and fuckin’ ride scrapers. … And instead of me being like, ‘I’m gonna look like Kurt Cobain, I still look like a motherfucker from East Oakland with dreads, with a beanie on my head, and my pants hang off my — you know what I’m sayin’?”

Pridgen loves irony. Specifically, he loves creating a disconnect between image and substance. That goes a lot deeper than applying a black mentality to a white form of music. For Pridgen, it’s a philosophy and a way of life. He and Hawkins look and behave like rock stars. They’re fashionable. They don’t have day jobs. They take a lot of smoke breaks. They weren’t always that way. The two met as young, church-going pre-teens. Pridgen was the drummer at Berkeley Mt. Zion Missionary Baptist Church, and Hawkins was visiting with Oakland Interfaith Gospel Choir. Pridgen got her attention by pulling her hair. “She had hella hella big-ass hair,” he explained. Later they attended Berkeley High School and Berklee College of Music together, then parted ways for a while. Pridgen toured with R&B singer Keyshia Cole, then switched to The Mars Volta. Hawkins joined the Kev Choice Ensemble. By the time they decided to form a rock group, they were both better known for gospel, jazz, and soul. Pridgen said that if he’d had his druthers, he would have been a rock star from the jump. He grew up listening to Nirvana and Marilyn Manson.

“I didn’t necessarily want to play jazz, I just had to at Berkeley High School,” Pridgen said. “I was rockin’ out all the jazz songs …. They would always be, like, ‘You need to listen to more Elvin Jones,'” he said, mimicking a niggling, holier-than-thou, first-chair high school jazz band voice.

Today, Hawkins looks like a young Betty Davis, with her chic outfits and bronze afro. Pridgen has tattoos all over his chest, arms, and stomach, which make his entire body look like decorative trompe l’oeil. He talks in a flippant, stream-of-consciousness way, flipping from point to point and not always connecting the dots between ideas. Behind that slacker image, they’re both incredibly savvy. Pridgen formed The Memorials roughly a year ago, after leaving The Mars Volta and enduring a spate of personal tragedies (including the death of a relative). He recruited Hawkins and guitarist Nick Brewer, partly because of their musicianship, but largely because they both seemed on top of their hustle. “They were the most down to get in the band and do it, like, hella ghetto style,” he explained. It worked.

The Memorials’ music is carefully mapped out. Pridgen said it mostly generates from jam sessions he has with Brewer, who currently lives in South Carolina. The two met at Berklee and formed their first rock band roughly a decade ago. They developed a composition process that’s partly improvisation-based, in that most of their material generates from jam sessions. Brewer will submit a guitar riff, and Pridgen will fill in the beat. Once they have a scaffold, they’ll add bass and keyboard lines. Hawkins writes her own lyrics and vocal parts, and over-dubs all the harmonies. At heart, it’s a drummer-led band. Most of the material revolves around rhythmic concepts, rather than riffs or melodies. “We’ll sit there until I come up with some groove that’s just fuckin’ odd, but you can still bob your head to,” Pridgen explained. “We’ll be sitting in the studio until that beat is came up with.”

The results are often astounding. Drum patterns on The Memorials’ debut, self-titled album are fast, abrasive, and asymmetrical. They seem to move in and out of time. On screamy opener “We Go to War,” Pridgen pushes the second and fourth beat just enough to make the song sound loose and syncopated. Hawkins comes in with a wail, trying to cram as many notes as possible into one breath. On a mission that will end with both our deaths, I’m not afraid of letting go, she howls. “It was crazy to watch her try to write the lyrics,” Pridgen said. “I’m like, ‘You’re not gonna be able to sing that shit live.”

The whole point, said Pridgen said, was to have a recorded sound that didn’t require a lot of high-tech gadgetry, and could therefore be easily replicated by a live band. But that’s not actually what makes their music interesting. Really, it’s that much-maligned jazz and soul pedigree that informs a lot of The Memorials’ music, and distinguishes these three musicians from their peers in rock ‘n’ roll. Their new self-titled album — recorded last year over a period of seven days, and set to drop in January — is littered with cross-genre source material, but it’s also the most nonlinear rock album to come out of the Bay Area in quite a while. “Day Dreamer” is a soul song that hovers on two-chord guitar riffs and fast, grinding drums. “Westcoast” incorporates Meters-style pedal. In many cases, it’s Hawkins’ vocals that determine the personality of each song. She bends notes, stretches vowels, and slides between registers in the style of a crooner or balladeer. The guitar and drums may sound like a rock or metal band, but she’s heavily steeped in blues.

In that sense, they’re bucking the trend. Rock may be an ascendant form in the urban music scene, but it’s still heavily programmed and digitized. Meanwhile, more and more three-piece rock bands are incorporating drum samples, laptops, or backing tracks to help fill out their sound. Hip-hop, with its driving, four-four drum patterns, has become the most pervasive force in contemporary music.

The Memorials are drifting in the opposite direction. Pridgen said he wanted to be “organic” — a favorite cliché among mid-career musicians. In this case, it actually fits.

The Unbeaten Track at Bedford Gallery