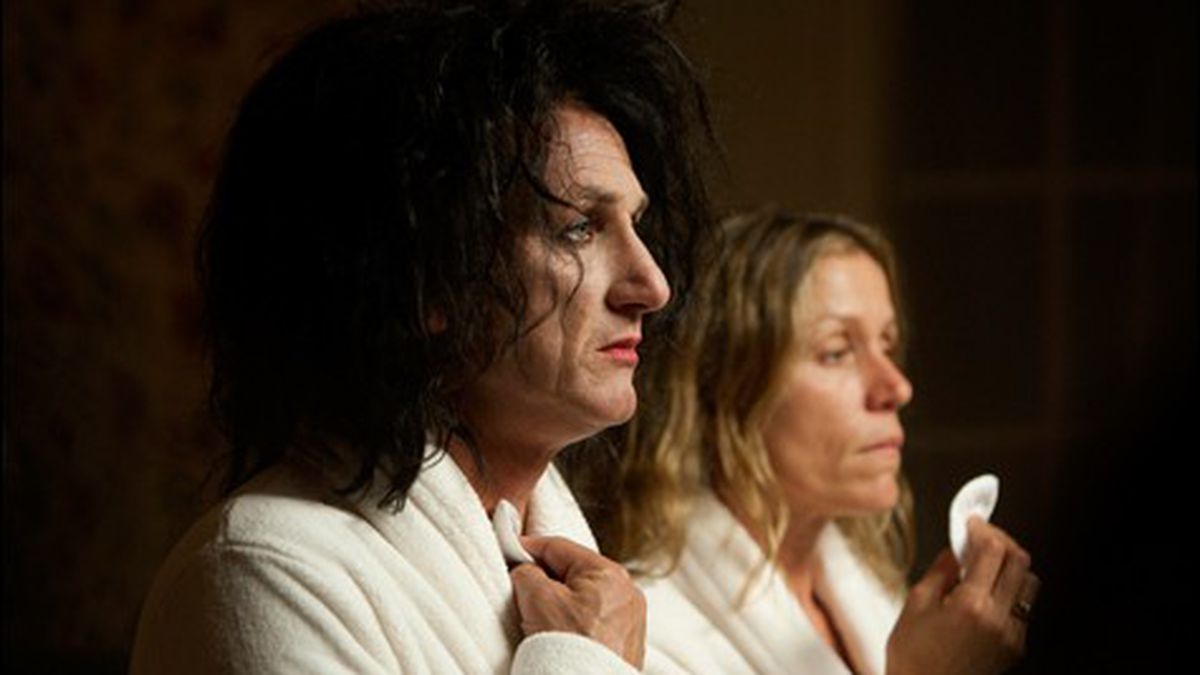 This Must Be the Place

Sean Penn shows up a week late for Halloween.

Sean Penn, the dark prince of changeling actors, usually plays someone violent and intense — hard-charging political boss, vengeful cop, combat infantryman, snarling gangster, etc. His urban jitters presumably have something in common with his admiration for director John Cassavetes, although he’s been impersonating hotheads for so long we’ve come to believe that’s the real Penn we’re seeing up there. So it’s a rarity to see him in bright red lipstick and teased hair, mincing through shopping malls in heavy-metal-rocker drag and speaking in a breathless, Andy Warhol-style stage whisper.

In This Must Be the Place, Cheyenne (Penn) is a retired American stadium-rock legend living in a mansion in Dublin, Ireland. How and why he ended up there is a mystery. Slow-moving and ghostly, Cheyenne resembles The Cure’s Robert Smith, or perhaps the musical brother of Edward Scissorhands. His main occupations, besides his habit of blowing stray wisps of hair off his face, is playing handball in the empty swimming pool with his wife Jane (Frances McDormand), who works as a firefighter, and checking stock-market figures. But occasionally he ventures forth to stagger through town, attracting giggles from the young women and bashful admiration from the young men. His companion on these jaunts is a local goth girl named Mary (Eve Hewson), whom Cheyenne is trying to fix up with a shy young guy named Desmond (Sam Keeley). He also pays a quiet visit to a sad, withdrawn woman, in connection with a guilty secret. That’s about the extent of Cheyenne’s daily life — until word comes from the states that his estranged father has died.

Off he flies to New York. The rest of this deliberately low-key, exaggeratedly eccentric spook show by a pair of Italians named Paolo Sorrentino and Umberto Contarello is set in motion when Cheyenne learns that his late father, a Jewish Holocaust survivor, had spent his life hunting down the German officer who humiliated him one day in Auschwitz. Now it’s up to Cheyenne, who seems challenged even to buy a cucumber in a supermarket, to track down the Nazi and avenge the honor of the father he hadn’t spoken to in more than thirty years.

In his remarkable clips-show-turned-documentary Los Angeles Plays Itself, essayist-filmmaker Thom Andersen notes that when foreign auteurs arrive in the United States to finally make that film about the America they’ve always dreamed of, all too many of them end up reflecting a simplistic tourist’s view of this country. The same clichéd images pop up: hideously gregarious people, oversize meals and vehicles, impenetrably bizarre landscapes, etc.

We can add director Sorrentino to the lost-tourist list. The incidental characters Cheyenne meets on his road trip, including musician David Byrne as himself, Harry Dean Stanton as a whimsical old sage, and Judd Hirsch as the Nazi-hunter-in-chief, look hastily added on. They contribute little to the shaggy-dog story of Cheyenne, suddenly transformed from a semi-catatonic ex-pop-star to a determined righter of wrongs. We begin to wonder why Penn even bothered with such a flimsy project in the first place. Let’s not stop here very long.