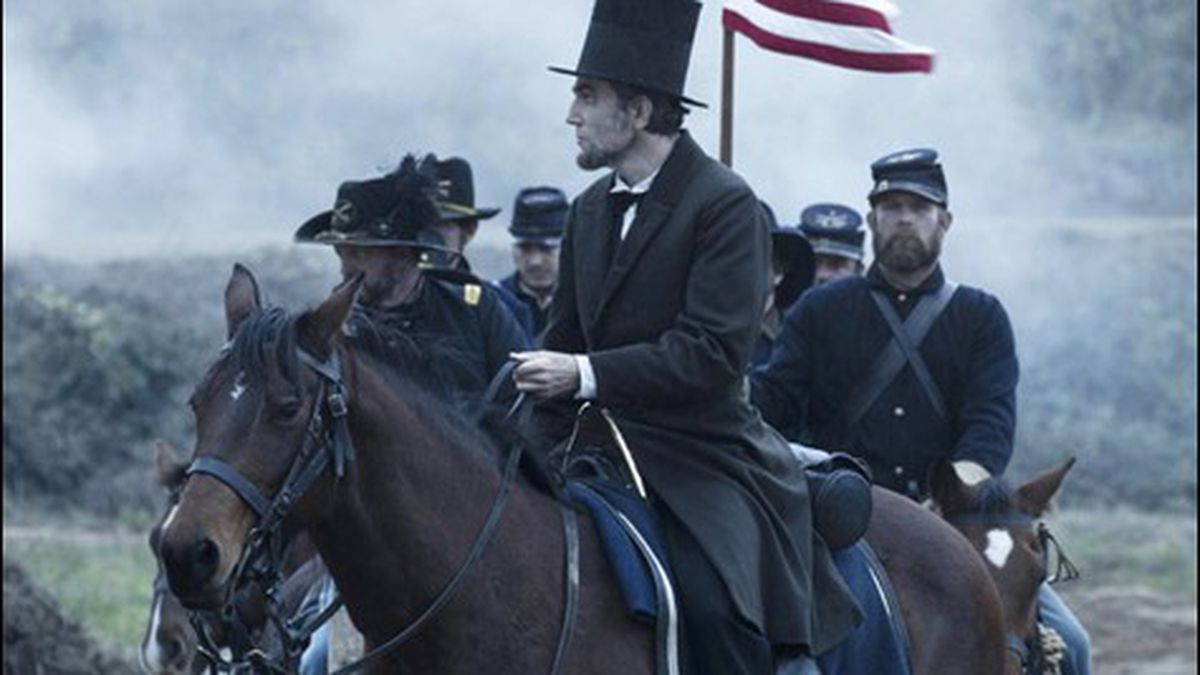 Lincoln freed the slaves. That’s how the sixteenth President of the United States is generally remembered — despite latter-day efforts to politically diminish that accomplishment — and how he probably should be remembered.

Steven Spielberg’s Lincoln ambitiously, soberly attempts to take us behind the scenes of Abraham Lincoln’s momentous last months, to put such events as the Civil War and the passing of the Thirteenth Amendment, an elaboration of the Emancipation Proclamation, in some sort of digestible perspective. Spielberg and screenwriter Tony Kushner no doubt realize that history is one of America’s least favorite subjects, but they’re on a mission from god, so to speak, to give Honest Abe’s legacy the War Horse, Munich, Saving Private Ryan treatment — the full Spielberg with all the trimmings.

By now audiences are well aware what to expect when Spielberg is wearing his schoolmaster robes. It should come as no surprise that Lincoln is hard to fault on its individual moments, but that over the course of two and a half hours it’s exactly like medicine going down: good for us, surely, but nothing anyone would want to swallow for the joy of it, despite a mesmerizing performance by Daniel Day-Lewis in the title role.

Still, moviegoers willing to surrender to a time-machine trip back to muddy, unpaved Washington, DC in 1865 may discover a few unexpected points of view. For instance, that the Union was far more fractured than it is today, even taking into consideration the War Between the States. In 1865, Lincoln’s Republican party had the task of fighting the Confederacy while herding anti-slavery abolitionists and GOP “radicals” like Rep. Thaddeus Stevens (gleefully played by Tommy Lee Jones) into an uneasy consensus on how to win the war, stop the slaughter (600,000 dead in four years of war), heal the bitterness, and patch up the nation.

The movie goes into laborious detail on the political maneuvering behind the upcoming vote on the anti-slavery amendment, not all of it dry. Twenty-first-century viewers may gasp to hear the raucous debates in the House, where New York City Democrats like Lincoln-hater Fernando Wood (Lee Pace) openly orate about the “niggeration” of the country and the Congressmen (they’re all male, white, and whiskered) compete in insulting each other. Racism was the rule then rather than the exception. Lincoln is shown trying to walk a tightrope between ending slavery and granting the four million freed blacks any civil rights at all. The “people,” North or South, generally loathed the concept of racial equality as much as the one about giving women the right to vote. In the meantime, Yankees and Johnny Rebs are shown in fierce hand-to-hand combat on the battlefield.

So America was a complete mess. Luckily we had Lincoln, the lanky, folksy country lawyer — he tells stories, like Jefferson Smith in Mr. Smith Goes to Washington — who spends much of his time listening, to ordinary soldiers; frontier settlers; his war-hawk Secretary of State, William Seward (David Strathairn); his sons (Joseph Gordon-Levitt and Gulliver McGrath); and his holy terror of a wife, Mary Todd “Molly” Lincoln (Sally Field). Chameleon par excellence Day-Lewis resembles photos of the actual Lincoln more than almost any screen actor who has played the part, and he projects the moral conscience we associate with the man, using his power to achieve a rough social justice as well as peace, all the while wrestling with his own doubts.

Every nook and cranny in the movie is filled with colorful characters played by furiously hamming actors. James Spader, John Hawkes, and Tim Blake Nelson provide welcome comic relief as a trio of con men/political fixers assigned by the White House to pass out pork-barrel deals to congressmen in exchange for “yes” votes. All Hal Holbrook (as a Lincoln advisor) has to do is show his face and we’re instantly back in the 19th century. Jared Harris, Jackie Earle Haley, Bruce McGill, Michael Stuhlbarg, and David Oyelowo turn up as, respectively, Gen. Ulysses S. Grant, a waylaid Confederate official, Secretary of War Edwin Stanton, Rep. George Yeaman, and Corporal Ira Clark, a member of a Colored Regiment of the US Army.

Our first reaction is: History Channel all the way. Spielberg doesn’t spare the obvious John Ford touches nor his usual overstatement. But Day-Lewis works on us like a boxer, slipping in punches, wearing us down, in a portrait of an idealist facing more trouble than any chief executive before or since. We end up believing in the actor, in Lincoln himself, and in his mission — if not exactly the self-imposed pomp and circumstance of the history lesson. The bad old days were awful enough all by themselves.

Fourth of July Events Around the East Bay