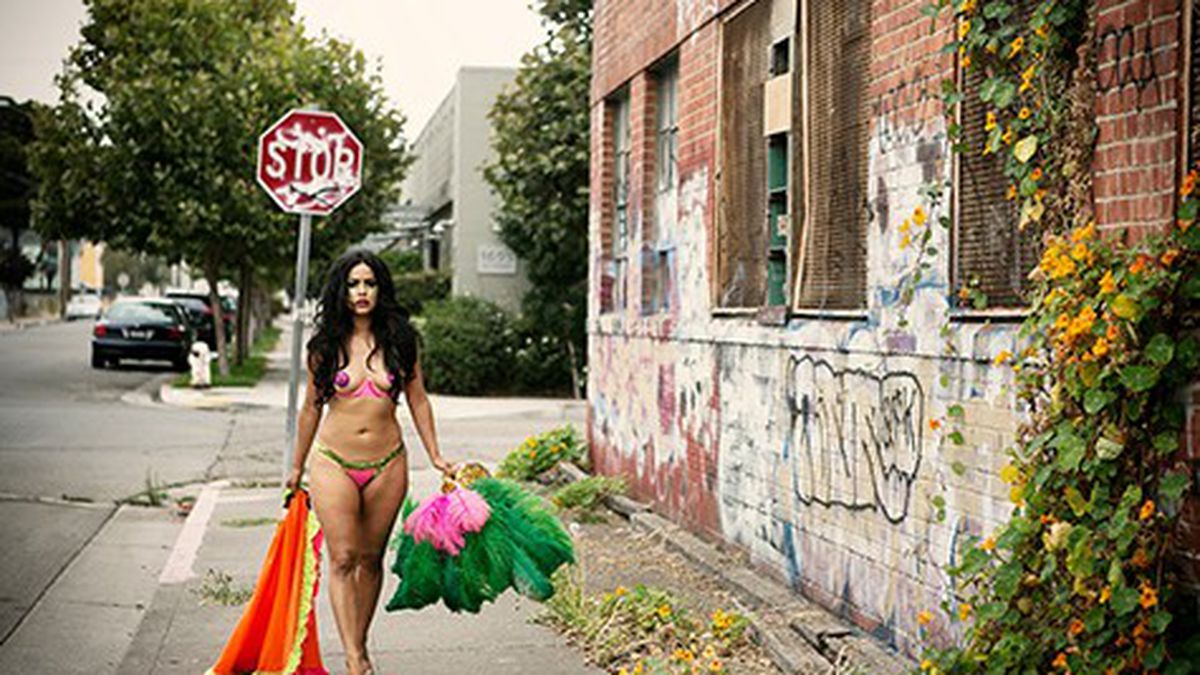 This Month’s The News Offers an All-Oakland Lineup

This isn’t a tableau from some fetish party thrown by the Bay Area kink avant-garde, but a subversive, playful, and discomfiting performance by Xandra Ibarra (aka La Chica Boom), titled Dominatrix of the Barrio. It’s one example of the kind of provocative, edgy theater pieces at which the artist, community organizer, and neo-burlesque performer excels. Ibarra’s work explodes racial, political, sexual, and gender issues by way of drag, humor, and the use of Mexican/[email protected] iconographies. She calls these acts spictacles, or “spectacles of degeneracy and power that are both against and engaged in the colonial gaze.” Other spictacles have included making tacos with her panties, giving birth to a Hitachi Magic Wand, and donning a Tapatío hot sauce bottle in a strap-on harness.

Ibarra was part of the very first The News event when it was founded in 2012, and for next week’s show, she’ll be performing “something inspired by Diamanda Galas,” she said. “I have always been very fond of her work, politics, style, and approach to music. I don’t think it will be funny, but I always say that.”

Ibarra’s work, which she said plays with racial and sexual expectations, as well as confronts problematic views of Mexican identity in the United States, often employs humor.

“I’ve always been a funny lady and sometimes it’s the only way I know how to manage uncomfortable racist, homophobic, sexist moments,” she said. “I enjoy thinking of clever ways to respond. Sometimes the audience or person won’t get it. Sometimes their ignorance is funny; other times it can be painful. I like to play somewhere between comedic and melancholic because that’s what my life feels like.”

Organizing with feminist-of-color groups INCITE! and CARA (Communities Against Rape and Abuse) has also informed Ibarra’s work, she said. “Although it’s not acknowledged much, my work makes fun of population control advocates and anti-immigrant pundits who fear that Mexicans and women of color will pollute and infest the nation,” Ibarra said. “Hence my bottle of hot sauce on a strap-on, my obsession with roach imagery, and giving birth on stage. I approach the topic of sex, reproduction, and sexuality broadly from anti-rape organizing to reproductive justice and from anti-prison feminism to sex worker politics. A lot of my performance work has very specific links to feminist of color politics.”

Another topic that Ibarra critiques in her work is how burlesque is dominated by white women. “I don’t think that will ever change,” she said. “Fortunately, I can always make fun of their prioritization — and I do — and pray to the Virgen de Guadalupe that white supremacy will just die already. Next!”

The News has been happening on the first Tuesday of the month since January 2012 and offers cabaret-style entertainment featuring new work by queer Bay Area artists. The News has been home to more than two hundred artists and twenty guest curators, and is “a place to forge relationships and discover new queer work,” said Lex Leifheit, executive director of SOMArts. This month’s all-Oakland lineup is curated by seeley quest, and, according to quest, audience members should “expect toilets, tigers, tapestries, sonic subversion, and postmodern dance curiosities.”

Quest’s curation of an all-Oakland lineup was intentional, “because that’s where I live and know lots of community,” but quest also said the show’s lineup is meant to honor Inés, a friend and queer arts supporter who was injured recently. “I wanted to gather folks into supporting her and send love back during her recovery,” quest said. “Because she lives in Oakland, I decided to feature all Oakland-dwellers, to communicate a theme of ‘We share this city, represent, and care for each other.'” (Proceeds from a drawing at intermission, in which attendees can win prizes supplied by the artists, will go to Inés’ medical costs. )

An all-Oakland lineup is also perhaps another sign that the Bay Area’s art and activist scenes have steadily flowed to the East Bay in recent years, partially because of rising rents and increased evictions in San Francisco. At a time when many in San Francisco are bemoaning the loss of artists and queer spaces (San Francisco’s queer girl bar, The Lexington Club, is the latest to bite the dust), events such as The News are more important than ever.

“This month’s Oakland lineup is tremendously exciting, but the beating heart of The News is something essential and increasingly rare in San Francisco — consistency,” said Leifheit.

Kolmel WithLove, creator of The News, echoed Leifheit’s sentiments: “Events are not ideas, they are like restaurants. You can’t just like the idea that a restaurant exists — you go or it closes. It might sound severe, but we are seeing this again and again in the Bay Area, especially in relation to queer spaces.”

“Kolmel WithLove approached SOMArts shortly after Climate Theater and Mama Calizo’s shuttered in SOMA, and there was a sense that space was urgently needed,” Leifheit added. “It has been a powerful collaboration.” &#8;