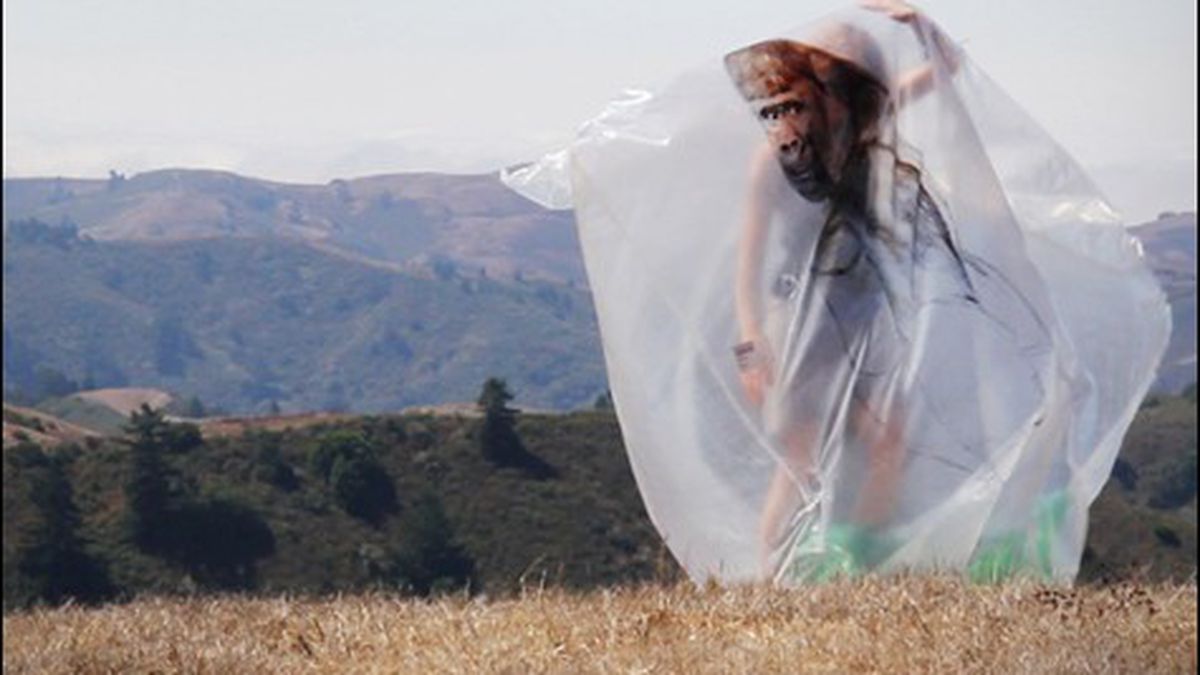 This Exhibit on Environmental Degradation Is Just Sad

From the reverse side of a translucent Sealy mattress bag, a forlorn-looking, marker-drawn gorilla greets visitors to And the Crowd Had Rushed Together, Trying to Keep Warm, Alicia Escott’s exhibition of new work at Interface Gallery. The veiled mug represents not just any primate, but specifically Koko, a famed gorilla whom researchers have ostensibly taught to comprehend much of American Sign Language.

Koko is emblematic of Escott’s exhibition not for her accomplishments, however, but for the unrealized potential she represents. Researchers hoped to have the gorilla mate and pass her acquired knowledge down to offspring ­— if this is indeed possible ­— but alas, she has refused all suitors.

Escott’s work in this exhibition, the title of which comes from the 1970 Creedence Clearwater Revival song “Who’ll Stop the Rain,” considers utopic visions of the 1960s and 1970s that have analogously come to expire, whether through abandonment or cynical compromise. Her primary focus is on environmental degradation.

Here, Escott is not mourning hippie dreams of back-to-nature communal living but rather more basic, seemingly attainable goals that have gone unmet, such as a serious utilization of sustainable solar energy. For one work, Escott set out to paint an image copied from a 1970s magazine ad celebrating the future of solar, but stopped midway through, deciding to leave it in its unfinished state, wrapped in shipping plastic ­— symbolically shelved like the promise it represents.

Other works surface similar sad ironies ­— a disposable butane lighter with a wild cat printed on it as a novelty selling point; a US postage stamp depicting an endangered animal alongside the word “Forever” — until arriving at what reads as the artist’s summarization of modern life: a litany of credit card company calls to action (“You’ve got a bright future. Climb aboard. Searching for a good deal? It just found you” and so on).

“Primarily, I think Alicia’s work captures the condition of living with longing and the sense of helplessness — living in a world like this, where we know what is happening to our environment, but we can’t do much about it and we just keep moving forward,” said gallery director Suzanne L’Heureux. Escott’s approach is thoughtful rather than didactic — refreshing for environmentalist art — but the total effect of these works amounts to a rather visually bland march through disappointment and malaise: not exactly stirring.

There are two exceptions in this exhibition, both video works. One depicts the artist stumbling about inside the Koko-marked mattress bag before a striking California vista as the exhibition’s titular folk tune triumphantly swells and then fades; the other finds her likewise outfitted in a forest and is silent. “There’s no overt commentary,” suggests L’Heureux, “just this sad dance between the human, the animal, and the human product, or waste, that I think is really evocative.” Unfortunately, whatever it evokes is quickly swallowed up by the pervading attitude of despondency and pity — a regrettably inert offering.

And the Crowd Had Rushed Together, Trying to Keep Warm runs through February 24 at Interface Gallery (489 49th St., Oakland). InterfaceArtGallery.com