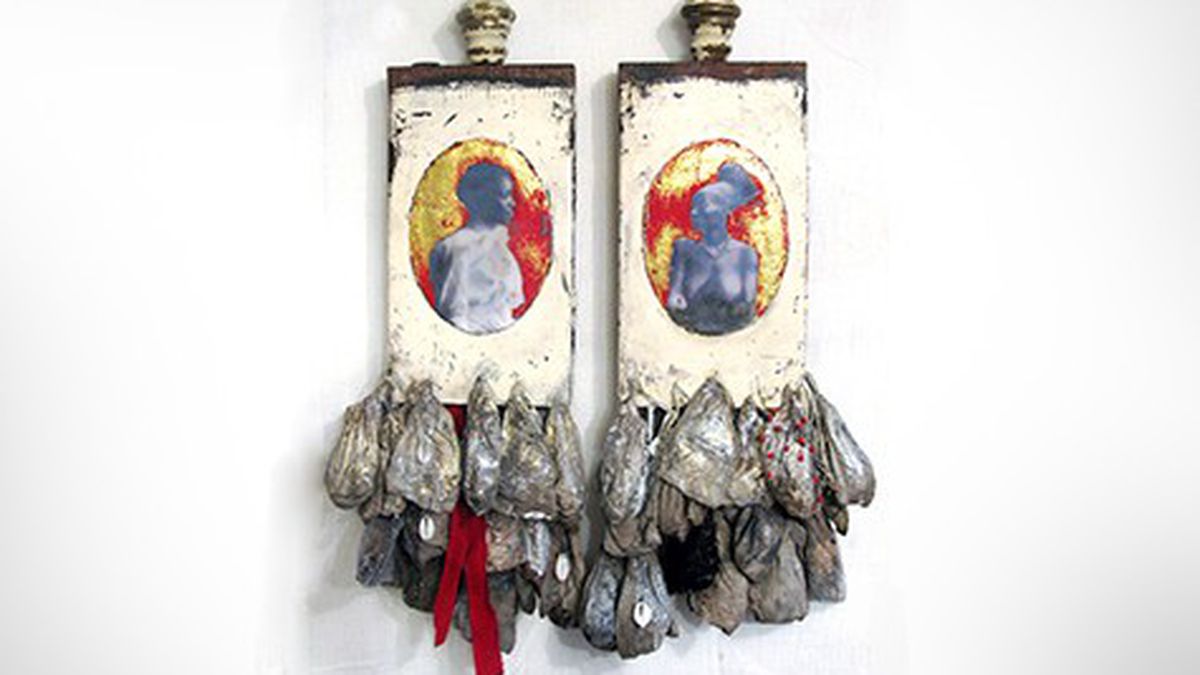 In Heirloom, artist Bryan Keith Thomas celebrates the black experience through assemblages of antique possessions and historic symbols from the old American South.

As a kid growing up in the small town of Dyersburg, Tennessee, Bryan Keith Thomas’ best friends were the eighty-year-old women who lived in his neighborhood. He would sit on their porches in the afternoons and listen to them recount tales of the past. Now, if you ask, the artist and California College of the Arts associate professor will recount his own stories about listening to their stories — describing how they held themselves like royal matriarchs, and paid a meditative attention to reality as a symptom of moving slowly.

In an interview, Thomas told me about Miss Rosy, who would sit on her couch while her fat dog slept on the floor, her pet birds flew overhead, and her long-haired housekeeper scurried about. Miss Rosy was always adorned in a plethora of precious jewelry, and when Thomas asked why, she told him, “It’s mine. I’m old. I’m not going anywhere, and I’m wearing it all.”

These women helped nurture Thomas’s lifelong affinity for collecting objects and stories. They were also the partial inspiration for Heirloom, his current solo show at Joyce Gordon Gallery (406 14th St., Oakland). The show is Thomas’ first in eight years, and features painted portraits and weathered wall-hanging sculptures assembled out of collected antiques. Specifically, he uses remnants from the pre-Civil War American South — wooden church fans, silver serving platters, broaches, washboards, and architectural ornaments. Thomas also prints old photographs — some from his own family, some taken from books, and some simply found without context — onto many of the larger objects and adorns them with “heirloom bags.”

Thomas’s “heirloom bags” are small cloth sacks filled with precious, collected objects. They are a reference to the bags in which African Americans in the old South used to keep their most important possessions, sewed into the hem of a garment. “They are metaphorical for those things that you carry with you, that become important to you, that you want to pass down,” said Thomas. These could be objects, histories, techniques, or memories. In many of the pieces, these bags are dusted with glitter and gold powder. The shimmer speaks to the opulent nature of the things that people often choose to keep, and also alludes to the gold in churches that symbolizes immortality and spiritual wealth.

Much of Thomas’ work has a polysemic quality, digging into the nuances of black history that are often left buried. Pointing to a piece composed around a silver platter, he said he enjoys considering the unexpected intersection of the shiny quality of something special and the allusion to servitude. He likes to see how putting a painting of Harriet Tubman across from one of a West African queen influences the ways in which the viewer interprets each. As a whole, Heirloom functions like a conglomeration of mutable signs — a story of time and history that dislodges the viewer’s concept of each and invites personal rewriting through free association.

Although Thomas’s pieces emerge from a convergence of personal stories, found stories, and collective histories, he ultimately he sees his own authorship fading from the meaning of the work. He hopes that someone will identify a piece and say, “That’s my heirloom. You’re coming home with me. I already know your story.”