.Reclaiming the Lives of Undocumented Queers 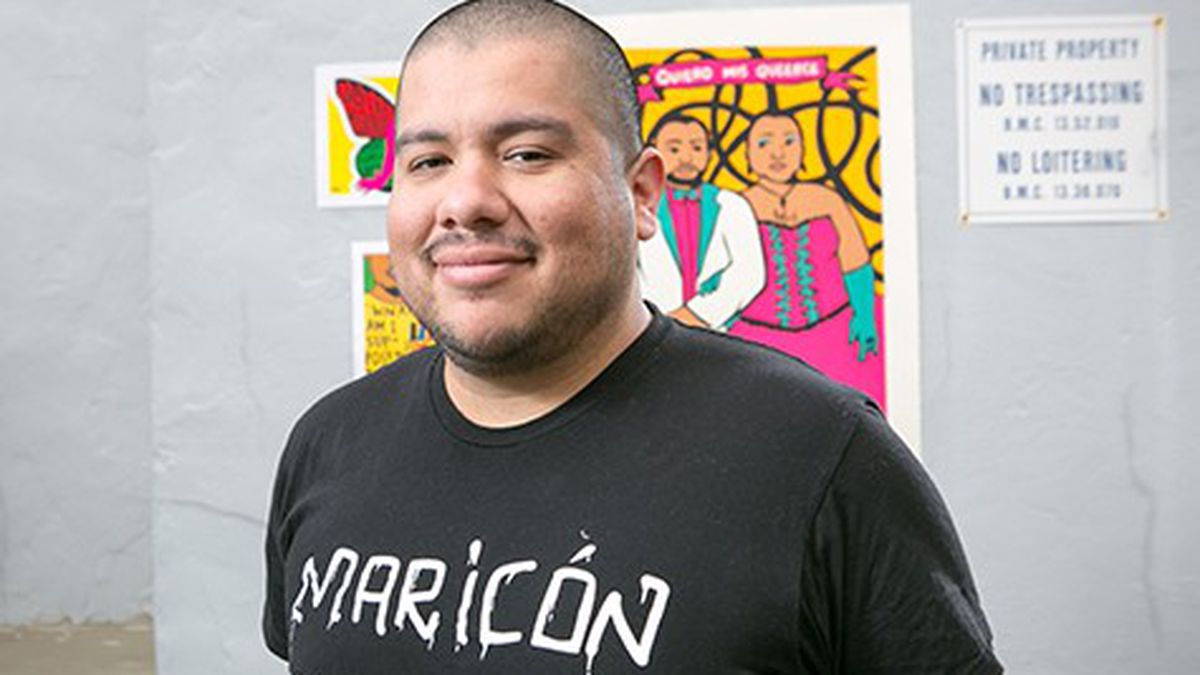 In an episode of “Undocumented and Awkward,” Julio Salgado steps into the hallway after cleaning a room in the hotel he works at and finds himself face-to-face with a classmate from high school. What ensues is both tragic and hilarious. Through a cringe-worthy session of awkward questioning, Salgado attempts to relay the reality of his situation. Yes, it took him nine years to graduate from college, because he was working the entire time. Yes, he works at a hotel even though he has a college degree because he is still undocumented. No, he didn’t work less hard than you. And, no, he doesn’t need you to get him a job at your company.

“Undocumented and Awkward,” is a web series created by Salgado and Jesús Iñiguez whose premise is exactly what it sounds like — the awkward moments that come up when people don’t understand undocumented immigrants’ situations. In another episode, Iñiguez never gets to meet his blind date because the club won’t let him in with his Mexican consular card.

All of the episodes, which are around five minutes long, maintain a light-hearted tone, but draw humor from the absurd unfairness of life without papers. Although Salgado and Iñiguez often take inspiration from personal experience, many of the episodes were conceptualized in collaboration with other undocumented youth.

“Undocumented and Awkward” is posted on Dreamers Adrift (DreamersAdrift.com), a website started four years ago by Salgado, Iñiguez, Fernando Romero, and Deisy Hernandez (Romero and Hernandez have since stepped down their involvement). Their mission for the project is to “document the undocumented.” Beyond videos, the website features blogposts, essays, and short stories by them and other “dreamers” — undocumented youth fighting for immigrant rights. By producing content that represents the perspectives of undocumented youth, they hope to take control of the cultural narrative that has been constructed around immigration, largely by the mainstream media.

Salgado was born in Mexico, near Tijuana. In 1995, when he was eleven, his family was forced to immigrate to the United States because his sister needed sustained medical care from a doctor in California. As an angsty teen in love with the art of Frida Kahlo, Salgado taught himself English by watching sitcoms and listening to Radiohead and No Doubt. He also learned to keep his queer and undocumented status hidden.

After graduating high school in 2001, he spent nine years at various colleges, ultimately graduating with a degree in journalism from Cal State Long Beach. As a student journalist, Salgado would document the stories of others with situations similar to his own, and express his personal intersectional struggles anonymously through a zine that he and Iñiguez (whom he met in college) self-published. It wasn’t until 2010 — when undocumented students across the country began performing acts of civil disobedience in support of the DREAM act — that Salgado saw the opportunity to come out of the shadows himself. For the first time, undocumented youth, who had always been spoken for by advocates, were gaining a personal voice. Salgado felt he needed to contribute his own in solidarity.

At that point, Dreamers Adrift was born. But Salgado also started to create digital art for the movement. Using Photoshop, he began making bold, brightly colored posters with statements of solidarity. They featured illustrations of protest leaders, with words such as “I exist!” emblazoned above them. Salgado shared his work online, and to his surprise, it was picked up and disseminated by supporters.

In 2012, one of Salgado’s artistic idols, Favianna Rodriguez, encouraged him to move to the Bay Area. Rodriguez took Salgado under her wing, and taught him the techniques he needed to further his practice. Salgado, who now lives in South Berkeley with Iñiguez, has been making digital posters ever since, gradually refining his style and expanding his subject matter. In 2012, he also started a series called “UndocuQueer,” which features portraits of undocumented and queer activists with quotes from each on what being “undocuqueer” means to them. An amalgam of the portraits was installed on the Galeria de la Raza art billboard in San Francisco’s Mission District during Pride month in 2013.

Now, Salgado (who is no longer deportable thanks to Deferred Action for Childhood Arrivals) splits his time between contributing to Dreamers Adrift, illustrating, and working as a project manager at Culture Strike, a magazine that aims to fight anti-immigrant sentiment by showcasing the perspectives of migrants and disseminating counter-narratives. Salgado also illustrates a comic strip for the publication each week called “Liberty for All.” It follows an undocumented queer woman named Liberty and her group of minority friends. Although the storyline is primarily written by Tina Vasquez, each character’s dialogue is shaped by a network of writers who represent their respective backgrounds. Salgado pointed out that even though he and Vasquez are both from oppressed communities, if they were to write the voices of other minorities, they would be perpetuating the silencing that they are fighting.

After many episodes of “Undocumented and Awkward,” Salgado and Iñiguez have moved on to a series called “Osito,” which is written by Salgado and directly reflects his life as an undocumented queer artist living in the Bay Area with his heterosexual best friend. The two creators explained that the episodes are often near verbatim re-enactments of conversations that they have had or things that have happened to them.

Salgado’s motivation to start the series was to address the lack of representation of his experience in pop culture. “I had seen the HBO show Looking, which is about queer men in the Bay Area, and I was like, I don’t see myself in that,” he said. Like his visual art, the videos are about asserting existence. “It’s about feeling like I’m not the only person going through this shit,” he said. He knew that no one was going to hand him money to create the portrayals he wanted to see, so he decided to do what he could with the resources he had.

In regard to his tendency toward humor, Salgado said that space for tragic stories is necessary, but so is space for comedic relief. As victims of oppression, undocumented characters rarely get the chance to deliver the punch lines, and that’s not fair. “It’s a really hard thing to do because a lot of shitty things happen to our communities,” said Salgado. “But you have to. You have to laugh and look at life in a way that is not constantly crying, because we’ve cried a lot.”