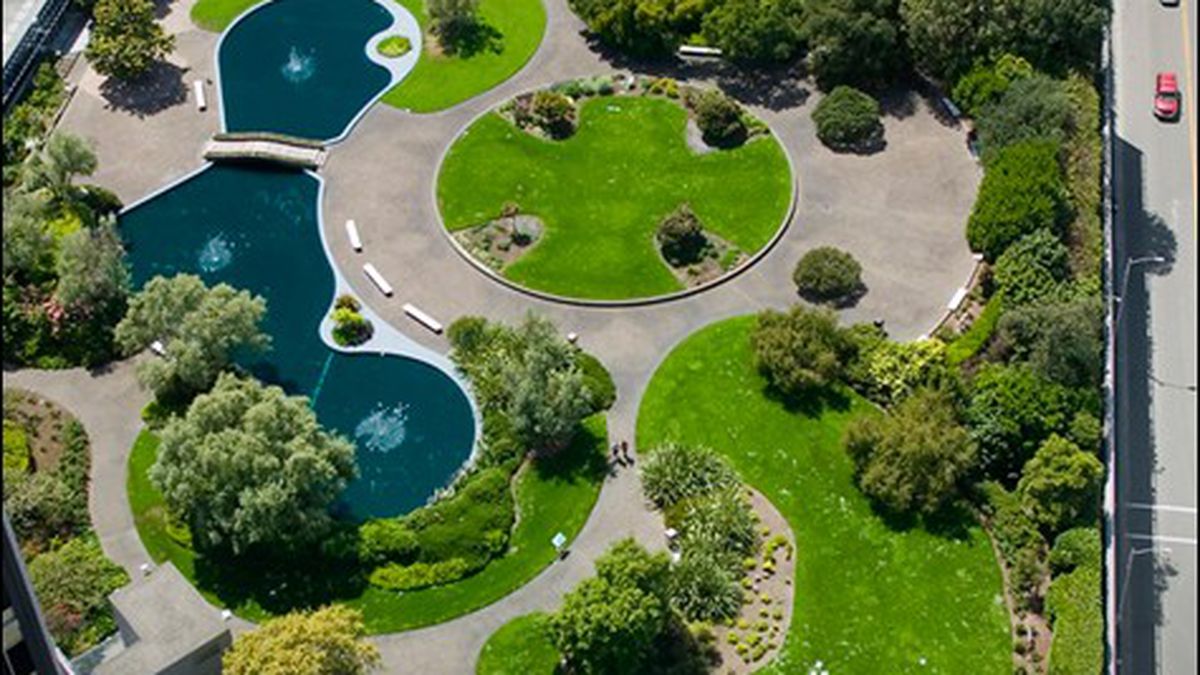 There’s Something Out There

If you were to happen past the five-story parking structure that neighbors the mixed-use Kaiser Center buildings in Oakland (300 Lakeside Drive), you might not realize that the garage functions as much more than a receptacle for parked cars. Make the five-flight trek (or take the elevator) to the top and you’ll find a rooftop garden lush with green foliage and flowing with a kidney-shaped pond. The garden, which spreads out over every last inch of the 3.5-acre rooftop, serves as a hidden respite from the streetlights and storefronts below.

To be sure, the garden isn’t actually that much of a secret. Kaiser Center tenants and employees surely know it’s there, as do the scores of people who visit the man-made oasis for special events, on lunch breaks, and just to take in the sights. But even those who have visited it may not know much about it — like how it got there or the rhyme and reason behind the placement of its many trees and the shapes of its lawns.

These are just a few of the details that will be revealed around the garden and 24 other (mostly) modern Bay Area architectural landscapes on a series of expert-led tours that make up What’s Out There Weekend on Saturday and Sunday, September 17-18. Hosted by the Cultural Landscape Foundation — a Washington, DC-based nonprofit that aims to educate the public about historic landscapes throughout the country — the free weekend tour series has already made stops in major cities like Washington and Chicago and now makes its Bay Area debut.

“One of the things that we’re trying to do is teach people how to see and how to value landscape,” said Charles Birnbaum, who founded the organization in 1998. “What we wanted to do was focus on places that were public, and very often places that people move through every day but may not know their history.” Specifically, the tour highlights sites designed and constructed during the modernist era of architecture that boomed after World War II and rejected the rigid design styles of earlier periods.

Birnbaum explained that while it’s easy enough for a member of the general public to point out distinguishing features of buildings and other landscapes, they’d probably be hard-pressed to explain what makes each particular site distinctively modernist and why it was designed as such. He used the Kaiser Roof Garden as an example: “You wouldn’t notice this if you’ve been there before, but the placements of the trees are all on a grid — because they have to be on top of structural columns.” So rather than an aesthetic arrangement, strategic placement of the heavy trees keeps the roof from caving in.

The tour focuses primarily on San Francisco sites, with stops at popular attractions like the Japanese Tea Gardens and the Sutro Baths, but on Sunday ventures into Berkeley and Oakland with a 10 a.m. tour of Greenwood Common (between Buena Vista Way and Rose Street, Berkeley), an 11:30 a.m. tour of the UC Berkeley campus (Oxford and Addison streets, Berkeley), and visits at 2 p.m. and 3 p.m., respectively, to the Kaiser Center and the Oakland Museum of California (1000 Oak St.) rooftop gardens. Free. TCLF.org/event/wotw-san-francisco or 202-483-0553, RSVP required.

Godspeed, Ye Citizens of the Republic