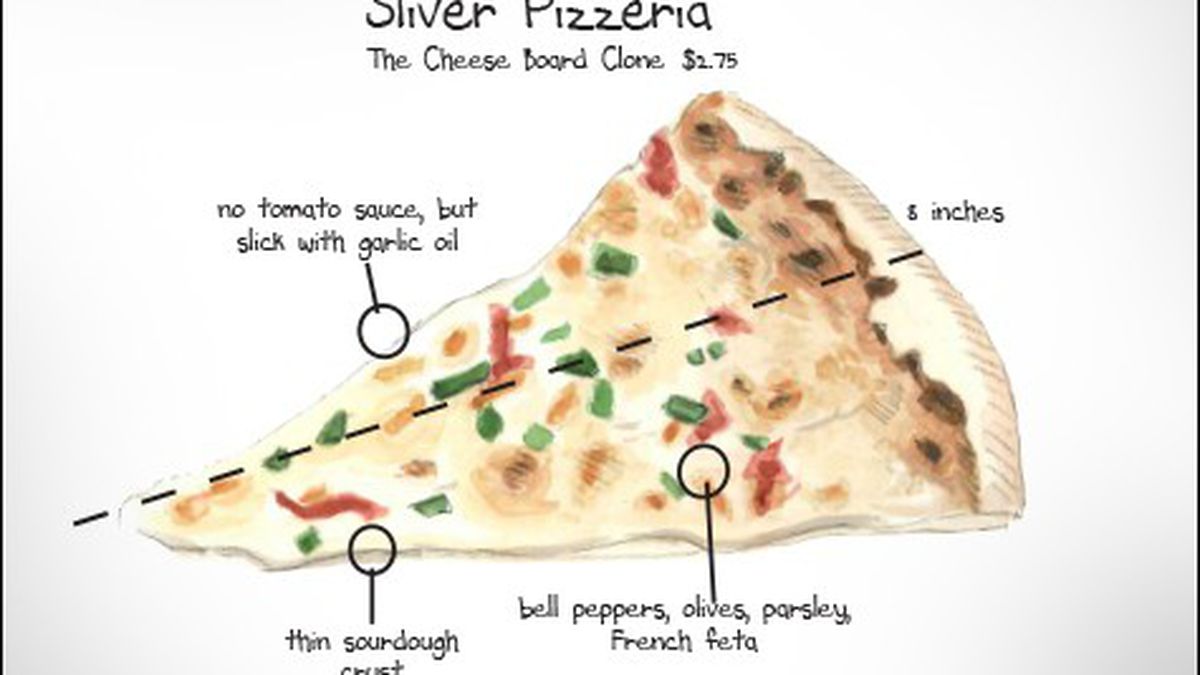 The Year in East Bay Pizza

Six new pizzerias offer up their interpretation of the perfect slice.

It wasn’t so long ago when it seemed like the idea that no good pizza existed in the Bay Area was the running refrain of every self-proclaimed food lover in town. Well, this might be the year that notion was finally put to rest. In many ways 2013 has been the Year of Pizza in the East Bay, as new restaurants specializing in by-the-slice pizza sprouted up every month.

Here, we compare and contrast some of the most notable new pizzerias.

Slicer serves about as close to a classic New York City slice as you’ll find in the East Bay — it’s got the foldable crust, the slick of grease, and just the right proportion of tomato sauce and cheese. But where the pizzeria really shines is in its seasonal Northern California toppings. We loved how a knob of snowy-white burrata wasn’t added until after the slice was reheated, adding a cool, refreshing quality. The slice shop has a casual vibe that’s charming despite being slightly tacky: There’s an ice chest, plastic flamingos, and a painting of a big ol’ Yeti.

At Artichoke Basille’s, the lone West Coast outpost of a New York-based mini-chain, the only dine-in option is to stand at the counter, and the attention to verisimilitude is such that the proprietors seem to have shipped a guy in from the Bronx to harangue/entertain customers with that signature brand of cheery New York City rudeness. The pizza, on the other hand, isn’t the traditional New York style, but more akin to something out of Man v. Food — calorie bombs with thick, crisp-bottomed crusts designed to stand up to ridiculous amounts of sauce and cream. The artichoke slice was the biggest we sampled, and was topped with enough artichoke cream sauce to knock us into a deep slumber. The square Sicilian slice (pictured on the next page) was only slightly less decadent. Swapping out regular tomato sauce in favor of a classic East Coast vodka sauce? That was a stroke of genius.

The Star on Grand

Okay, so The Star isn’t a slice shop. The restaurant, which specializes in Chicago-style deep-dish pizza, doesn’t even sell by the slice, and it’s definitely a sit-down establishment, complete with fancy cocktails. But what The Star does sell are six-inch personal deep-dish pizzas, which — if you’re a fan of the restaurant’s super-chunky tomato sauce and buttery cornmeal-based crust — makes for just about the perfect lunch. You can get the personal pies with the toppings of your choice; we like The Port (pictured), which is a classic combination of sausage, peppers, and mushrooms. But really, these pizzas are all about the interplay of tomato sauce, melted cheese, and crunchy crust. Everything else is gravy.

The sheer size of Hi-Life’s slices — so big we had to hold them with two hands — reminded us of the giant slices we used to gorge ourselves on during the shopping-mall excursions of our youth. But the quality of ingredients at Hi-Life is much better. The Uptown eatery takes a “build-your-own” approach to pizza by the slice, which means toppings were piled on just prior to reheating; the downside of this was that the toppings didn’t really cohere to the pizza and slid off while we ate. The tomato sauce, on the other hand, was spicy and salty, as though designed to make us thirsty for beer. All said, this late-night spot is worth a visit just for its ambience: blaring surf music playing overhead, a kung-fu movie projected on one wall, and vintage pinball machines upstairs.

The thing to know about the “Oakland-style” pizza at Nick’s is that the crust might be the best in town — a perfect New York/NorCal hybrid: crunchy on the bottom and chewy on top, with enough sourdough tang to keep things interesting. Like at many Bay Area pizza joints, the toppings tend to showcase the season’s bounty (kale and persimmons and such), but we favored the simple pepperoni and a Yukon Gold potato slice (pictured on the next page) that recalled the flavors of a loaded baked potato. The restaurant’s spare decor would befit even the staunchest purist’s ideal of a no-nonsense East Coast slice shop, and, best of all, the prices are decidedly unfussy, too: At just $2.75 a pop, these were the biggest bargain slices among all we sampled.

If you’ve ever had pizza at The Cheese Board or Arizmendi, you’ll be familiar with the setup at Sliver Pizzeria: There are no topping choices (just one vegetarian pizza of the day) and no tomato sauce in sight — just a slick of savory garlic oil, which is the very best part. The pizzas at Sliver — which was opened by three Cheese Board alums — have more or less the same sourdough base as those aforementioned shops, are served on the same basket-style plates, and even come with the same mini-slice (the “sliver”) thrown in as a bonus. The only difference? At this Berkeley spot, there’s lots of seating and a lively sports-bar atmosphere. A snarkier writer might deem these vegetable-topped sourdough flatbreads rather than “real” pizzas, but when in Berkeley, you may as well do as Berkeleyans do: Embrace this Northern Californian contribution to the pizza canon.

The Rapid Growth of GMOs