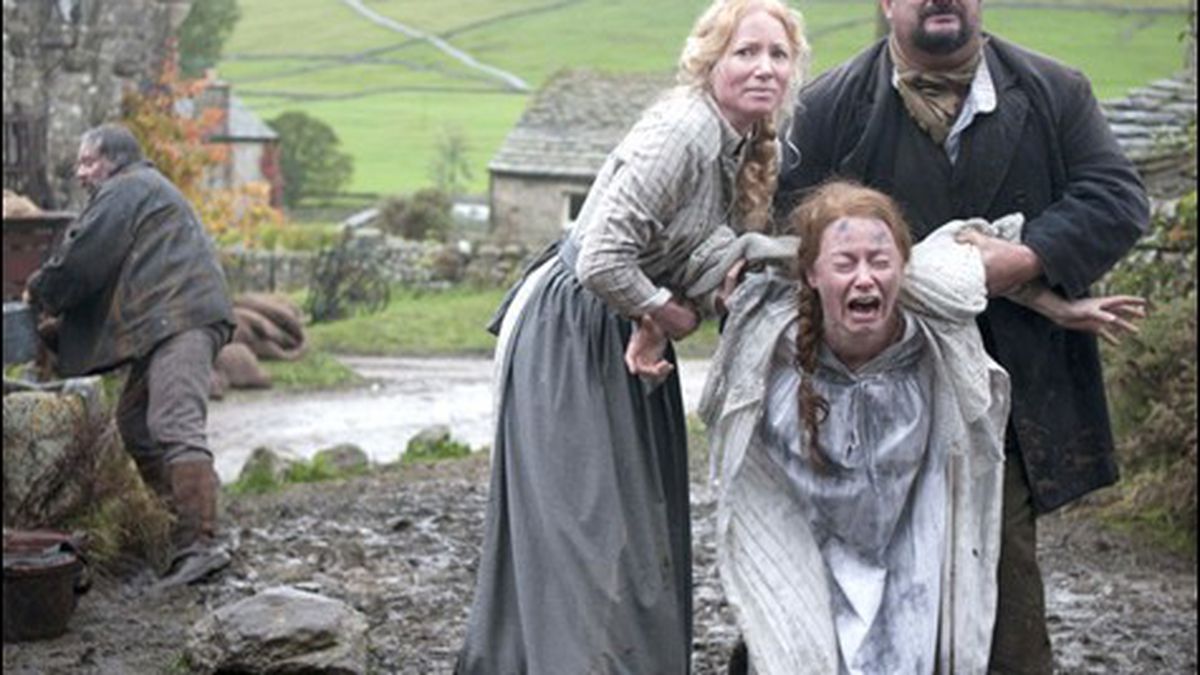 The Woman in Black

Beyond being yet another example of the new year’s fine crop of genre items, James Watkins’ unrelentingly spooky The Woman in Black satisfies a moviegoer’s curiosity about two conspicuous brand names. The first is actor Daniel Radcliffe, known perhaps unfairly throughout the world as Harry Potter for the past eleven years, and presumably anxious to break away from the gilded chains of that franchise to establish himself post-Harry.

The second brand is Hammer Films. The venerable British production company (founded in 1934) is most notorious for its superlative string of horror and mystery films from the late Fifties through the late Seventies, when the studio thrillingly revived the old Universal monster catalog — Frankenstein, Dracula, the Mummy, the Wolf Man — utilizing excellent production values, crisp direction, quality acting, lurid color, and the one-two punch of liberal bloodletting and sexy female victims.

Two actors in particular led the charge: hawk-faced, mild-mannered Peter Cushing and towering, magisterial Christopher Lee, who together played everything from Sherlock Holmes to Rasputin the Mad Monk until Hammer’s spark fizzled sometime after the Hong Kong co-prod The Legend of the 7 Golden Vampires. But by then the company had long since entered legendary territory.

Vintage Hammer titles still wow audiences, and lately the resuscitated Hammer Film Productions has put its stamp on such memorable horror/thriller items as Matt Reeves’ Let Me In. The Woman in Black, officially a Talisman Films production in association with Hammer, thus has two distinct sets of aspirations — to prove that Radcliffe is no fluke and that Hammer Films is back with a vengeance. Right on both counts.

The outline is less than promising. Those who were hoping for a rest from the “scary ghost children” syndrome popularized so indelibly by The Shining way back in 1980 are destined to find no peace in the Northeast of England to which Arthur Kipps (Radcliffe) journeys. The Woman in Black concerns itself with dead babies, grieving parents, and almost nothing else. Mr. Kipps, a London solicitor in a permanent funk over the demise of his wife Stella (Sophie Stuckey, in flashback) while giving birth to their son Joseph (Misha Handley), is given a make-or-break assignment by his impatient boss at the law firm. He is to take the train to the village of Crythin Gifford to settle the affairs of one Alice Drablow, who reportedly passed away mysteriously while mourning the death of her young son. So there’s a double helix going on.

Crythin Gifford is bleak, the townsfolk are surly, and the wonderfully named Eel Marsh House, the now-deserted country seat of the Drablows, is a spectacularly dismal pile atop a flood plain, reachable by road only at low tide, amidst funereal woods filled with gravestones and spirits of departed toddlers. We keep expecting to see Edward Gorey’s signature in the corner of the screen. Not surprisingly Kipps is obliged to work alone at the house, where his number-one occupation, aside from opening doors and discovering grisly objects, is fielding inquiries from the restless ghosts of Mrs. Drablow (Alisa Khazanova) and her lost Nathaniel (Ashley Foster), a drowning victim. Groaning walls and scream cues aplenty.

Radcliffe is a natural for this sort of thing. His dark hair, earnest gaze, and thin face proclaim “gothic” in no uncertain terms, he looks right at home in Victorian clothing, and that Harry-Potter-versus-evil forthrightness shines through. But he’s not the only booby in the hatch. Local landowner Mr. Daily (haggard-faced Ciarán Hinds), the only villager sympathetic to Arthur, and his loony wife (Janet McTeer from Albert Nobbs) with her “twins” (a pair of coddled lapdogs), host the visiting gentleman on one or two abbreviated social occasions — Mrs. Daily is always going into convulsions. In common with everyone else in Crythin Gifford, the Dailys have recently lost a child. To paraphrase Oscar Wilde, it’s beginning to look like carelessness.

The screenplay was adapted by Jane Goldman — the fire-engine-red-haired scenarist of Kick-Ass, The Debt, and X-Men: First Class — from the original gothic novel by English author Susan Hill, which was already made into a movie once before, for TV in 1989. Writer Goldman evidently knows and respects the Hammer imprimatur, and so does director Watkins (he made the 2008 UK thriller Eden Lake with Michael Fassbender).

From the very first glimpses of Mr. Kipps’ London street cloaked in yellowish soot, the film gets all the telltale nuances exactly right. The classic “Hammer tavern” into which Arthur ventures on his first night has that reassuring puked-in flavor. Every brick and cloak in the village looks thoroughly sodden in the never-ending mist. The house and grounds of Eel Marsh House don’t spare the taxidermy and quickly darting shadows, natch, but they’re used carefully, for maximum effect, instead of spraying us with non-stop gratuitous grotesquery. What an antidote to the hyperactive eye candy of Guy Ritchie’s Sherlock Holmes series, the most recent competitor in the neo-Victoriana contest.

If Goldman’s dialogue is unobtrusive and utilitarian — the film could function quite well as a silent — the scene-setting is as pervasive as a disease-bearing wetlands fog. Case in point: the “black mud pit” sequence in the final quarter, as Arthur, aided by Mr. Daily, literally dives into a foul bog of viscous slime one damp night, trying to retrieve a vital bit of evidence. Watkins films it from angles Alfred Hitchcock would admire, with a complete absence of cheap camera whips and wasteful “shock” cuts.

Everything in the film announces Hammer, from the casting to the costumes and the mechanical-toy props to the ugly mug of Keckwick the wagon driver (Daniel Cerqueira) and the haunted look on locked-up little Lucy Jerome (Aoife Doherty) — the small, seemingly throwaway details that come together to create a quality piece of genre entertainment. That’s good news for fans of classic horror. And Radcliffe handles his sophomore outing with easy style. By the time he’s finished we’re ready to crown him the new Peter Cushing. If we could count on him to continue to work the fantasy/horror/thriller vein we’d be satisfied. He’s well accustomed to fantastic premises and gloomy sets. But realistically, can a romantic drama be far behind? We shall see. In the meantime, The Woman in Black will shiver your timbers.

Still No Lease for the Parkway; Search for New Location May...

The Boy Who Cried War

Cops’ Violent Past to Be Kept from Jury