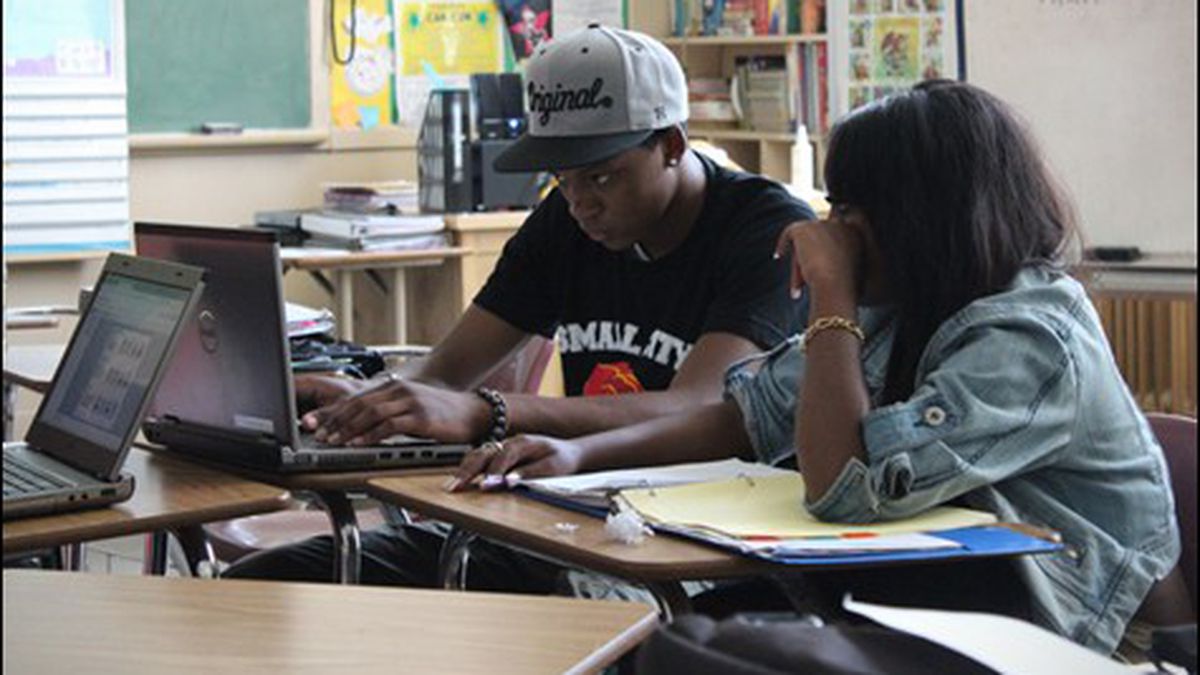 The little-known Oakland Emiliano Zapata Street Academy helps students who drop out or are kicked out of other schools.

As a student at Skyline High School, Erin Brown struggled. “I didn’t get any credits my junior year at Skyline,” recalled Brown, now 28. “The school was huge. The classes were huge. I was kind of introverted, and it was very easy to slip away, a little at a time. First it was no work being turned in, then it was stopped going to class, then it was stopped going to school altogether. And nobody really noticed.” Then Brown enrolled in the Oakland Emiliano Zapata Street Academy, a small alternative high school for students who drop out or are kicked out of other schools. “It just empowered me,” she said. “I never thought about going to college before I got here.”

Today, Brown is the director of the academy’s after-school program and is finishing up work on obtaining her California teaching credential. She’s just one example of the loyalty that the little-known school encourages among its students.

Founded during the height of Oakland’s radical activist period and named for one of the leaders of the 1910 Mexican Revolution, the Oakland Emiliano Zapata Street Academy was originally set up for students who had dropped out of Fremont High School. Today, the school accepts students from any school, as well as those who are referred by various local programs and probation officers. Some are simply looking for an alternative to the city’s traditional high schools, or are children of former academy students. And this week, the institution that bills itself as Oakland’s original small school will mark its fortieth anniversary with a celebration at the Oakland Asian Cultural Center.

The Street Academy has gone through many changes since the National Urban League received a federal grant in 1973 to open it in the heart of the Fruitvale district. Federal funding dried up and was replaced by funding through the Oakland Unified School District, oversight was turned over from the Urban League to an independent board of trustees, and the school moved from Fruitvale to its present location, the old Grant High School building on Pill Hill. Yet one thing at the school has remained constant over the years: its original purpose of providing a nurturing alternative high school, as well as encouraging students to understand, appreciate, and join the various social justice movements working in their communities. “A lot of things came and went in Oakland education,” said Street Academy science teacher Betsy Schulz, who helped found the school. “But we just stayed around, doing our thing.”

The Street Academy is distinctly different from the rest of Oakland’s high schools. While its 120 students are enrolled with OUSD and receive district diplomas upon graduation (they’re required to take the same core academic courses as other OUSD students), its 7 teachers and administrative personnel are employees of the Street Academy Foundation, which replaced the Urban League as the school’s fiscal manager. Class size is between 15 and 20 students. Core classwork ends at 1:30 p.m., but students are required to attend an hour of mandatory academic support each day. Afternoons and Wednesdays are set aside for elective courses, many of them taught by representatives of local community organizations. Students serve internships in social justice organizations such as the Native American Health Center and Speak Out.

Another aspect that sets the Street Academy apart is what administrators call CTM, the counselor-teacher mentoring program. Each teacher is assigned between a dozen and twenty students for whom they are responsible both inside and outside the classroom. Teachers meet with their assigned students twice a day to monitor them academically and personally, and three times a year they meet with their parents as well.

The mentoring program appears to have a positive effect. According to California Department of Education statistics, while the Oakland Unified School District had a 7.3 percent suspension rate and a 43.8 percent truancy rate during the 2011-12 school year, the Street Academy reported no suspensions or truancies during the same period.

“It’s one of the key reasons for the success of the school,” said Schulz. “For every student there’s a significant adult in their life that’s going to follow them all the years they’re in high school, that’s going to know their family, that’s going to know their situation, and stay on them. Best friend. Worst enemy. Big brother. Big sister. Surrogate parent. Whatever they need, we’re going to be there for that group of kids. It allows us to always be on top of their academics, on issues they have at school with a teacher or with another student, or what’s going on with them at home. If issues arise and one of your students is having problems, you are able to immediately intervene on their behalf.”

The Street Academy’s CTM program is partially responsible for another unique accomplishment — remarkably little fighting. During a visit to the school, I observed an argument develop between two students that immediately drew a crowd. Instead of the situation intensifying, teachers and staff called on the students to “report to your CTM, report to your CTM,” which broke up the gathering and deescalated the situation within a few moments. (The school has no security guards.)

During the day, the school’s hallways remain almost eerily empty. “I’ve had people walk in and say ‘What’s going on? You having school today?’ because they don’t see any students out in the halls,” said the Street Academy’s longtime director, Patricia Williams-Myrick. “And I say, ‘They’re here. They’re all in class.’ One thing we say to the students is ‘Don’t come here bringing your baggage from someplace else.’ We do not tolerate fights at all. I don’t care how good a student you were or are. One fight and you’re gone.” (The Street Academy has a memorandum of understanding with OUSD that allows it to expel students for fighting, which is unusual in the district.)

It is impossible to imagine the Street Academy without Williams-Myrick (the school’s beloved “Ms. Pat”), who came to the school a year after it opened, took over as director a year and a half later, and seems a combination of a dedicated education professional and hip grandmother. “I say to the students, we don’t want 5-0 up here,” she said, using the street term for police. “If you bring 5-0, you’re going to mess up the whole thing.

“This is more like a family atmosphere,” Williams-Myrick added. We don’t just hand out books and assignments and give a few tests, and that’s it. We involve the students in their own education. Everybody learns differently, so we’re here to meet the students’ needs, not them to meet ours. We try to be flexible. We don’t get caught up in ‘it’s this way or no way.'”

Perhaps that’s why, for former students like Brown, the school makes a lasting impression. “It’s a big part of my life, this school,” she said. “Since high school I wanted to come back here. I thought about what the school had done for me, how it changed me, how it made me think about learning differently, and then one day I got the chance to return. I see myself in these kids a lot. The Street Academy is where my heart is.”