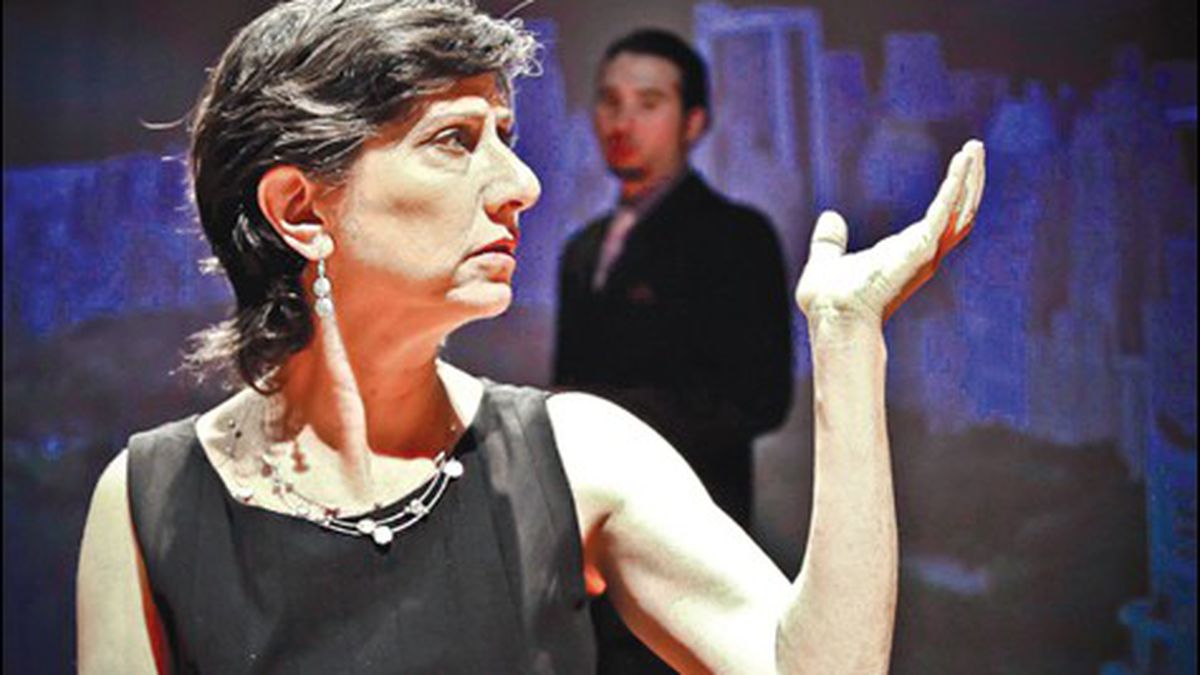 Loosely based on a Greek Tragedy, this version is an over-the-top modernization.

Euripides’ Medea tells the story of a woman who, after being abandoned by her husband, becomes inconsolable and ultimately murders her children. Centuries later, paleontologist Peter Ward borrowed the infamous character’s name for his hypothesis about biodiversity, which, to put it unscientifically, posits that nature abhors complex life forms and intends to eradicate them through mass extinctions, in favor of the more stable state of microbial domination that has characterized most of Earth’s history.

The connection of The Medea Hypothesis, Marian Berges’ play developed by The Central Works Writers Workshop in Berkeley, to either of these narratives is fairly tenuous, although there are broad resemblances: Em (played compellingly by Jan Zvaifler) is a woman whose husband leaves her and pursues custody of their daughter. Her outrage, coupled with a mounting anxiety about the decay of civilization and dooming of the planet, gradually (or rather, not so gradually) turns into insanity.

Unlike Euripides and his Medea, however, Berges proves comically unable to convey how the circumstances of Em’s life add up to her madness. The result is a strange, soap-operatic mess, wonderfully befitting for a Greek tragedy transported to a 21st-century context. This Medea, now playing at Central Works, is absolutely worth the 75 minutes of your time and attention span that it asks of you.

Em is a powerful Manhattan executive who, by all measures at the start of the play, seems a balanced and capable person. Perhaps she is not as present for her pre-teen daughter (Dakota Dry), but she does help to care for her aging father (Joe Estlack). She’s also annoyed by her recently estranged ex-husband taking a young movie star wife so soon after their divorce. Who could blame her?

In the play, however, Em’s annoyance becomes homicidal with baffling speed; all it takes is the conspiratorial whisper of her ominously monotone assistant, Ian (Cory Cenosoprano), for her to start sending gifts laced with radioactive material to the newlyweds-to-be. What motive Ian has to eliminate the husband remains unclear.

Em then meets a hunky plumber (also played by Estlack) who, hours after fixing her pipes, has her giving in to a booty call. Around this time, she begins receiving frequent video-chat calls from the father of her ex-husband’s new bride, a shady Eastern European businessman with the unexpected name Carl (also played by Estlack via pre-recorded video). Obviously but a thinly veiled narrative device, Carl apparently calls just to shoot the breeze with his daughter’s fiancée’s ex-wife about thematically relevant topics like aging, desire, and the dark subtendings of post-reality TV society. A hastily intimated and equally hastily abandoned narrative thread suggests that Carl is involved in a scheme to undermine Em’s chances of custody over her daughter, but that doesn’t explain the need for direct phone calls.

This sexy and sinister narrative tangle, complete with DeLillo-esque apocalyptic overtones and lines like “I’ll kill you, cocksucker!” (spoken by Em to a mustachioed and feather-capped waiter at a Swiss fondue restaurant who denies her extra bread), could spawn several seasons’ worth of dynamite daytime soap. Indeed, Central Works’ production is soapy down to its use of hokey and improbable establishing shots on the projector (a wide-open, moonlit sky during a ride from Midtown to Downtown Manhattan? What a world the characters inhabit!).

It’s not clear the extent to which any of these hilarities are intentional. With good camp, it rarely is. But even a viewer without a soft spot for cheese will appreciate the play’s serious strands, like watching a woman under a great deal of pressure succumb to the belief — founded in reality or not we do not know — that she is a dangerous parent, or at least complicit in a system in which her daughter would be better off not living. Mixing these two sensibilities is fine: Not every play can or should be as uniformly heavy as Central Works’ previous production, a dramatization of Dostoyevsky’s The Grand Inquisitor. The folly that is a Greek tragedy taking place in a jet-set present makes for just as good a use of the theater’s delightfully intimate space. &#8;