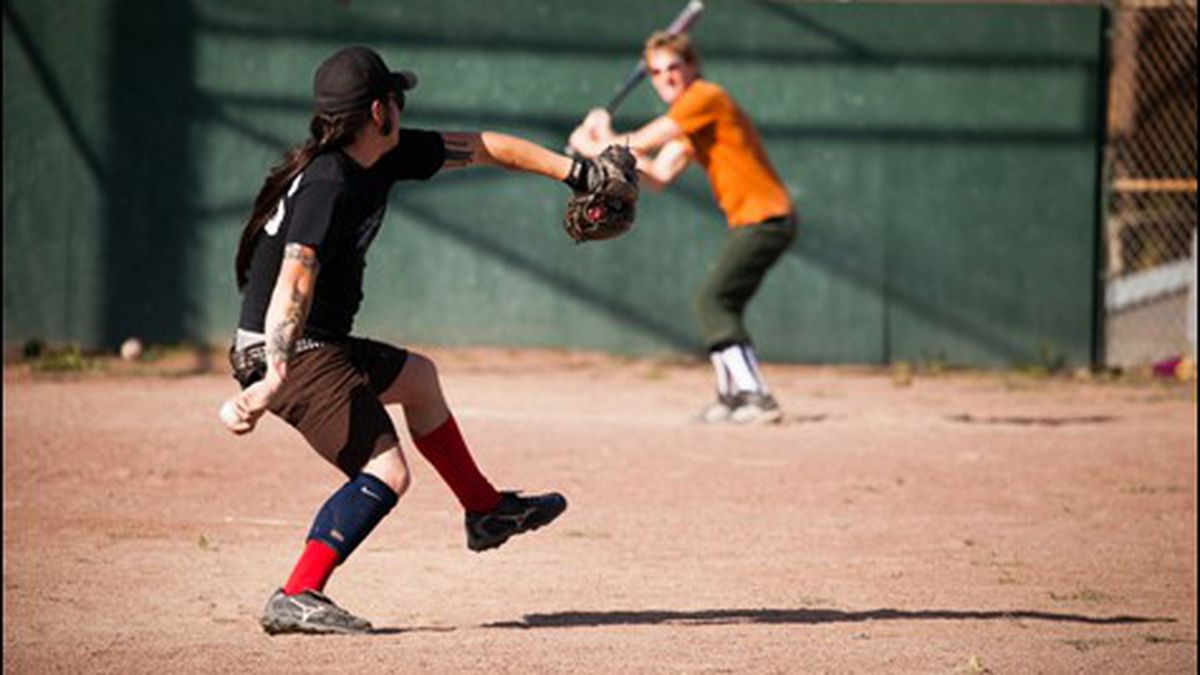 Think you're too old, broke, or clumsy for sports? Think again: The East Bay is awash in amateur sports leagues.

I am not what you might call a born athlete. I’m legally blind, tend to run away shrieking when someone tosses me so much as a set of keys, let alone any kind of flying and potentially hard object, and though my feminist and naively supportive parents put me in the Albany-Berkeley Girls Softball League for a few years, my go-to strategy was to never swing and hope for a walk. My senior superlative in high school was Biggest Klutz, and I’m pretty sure I’ve never watched a football game in its entirety, ever. And yet: This spring, I signed up for an amateur kickball team. And liked it. Though we ended up with the worst record in the league — which is its own kind of winning, if you think about it hard enough — I did finish the season with a slightly smaller fear of the ball, a serious love of Hamm’s, two runs (okay, they were both RBIs. But still!), and a newfound appreciation for team sports.

As it turns out, I’m far from alone: The East Bay is awash in adults-only amateur sports leagues, each with their own mores and charms. Some are intended for stone-cold beginners, while others cater to serious college and even semi-pro athletes who’ve now found themselves without a place to play. Many are formal, with drawn-out registration periods, organized teams, and a city parks and rec department behind them; others operate on an entirely ad-hoc basis and with a, um, liberal refreshments policy. Several are completely free, though registration fees can run into the double and even triple digits, typically for teams with uniforms and expensive equipment. All the major sports are covered, but there are also at least a couple you’ve never heard of. What links all these leagues, though, is that they’re kind of a brilliant idea: infinitely more interesting than yet another night out at a bar; good for your health (at least nominally); and an easy, usually lighthearted way to meet people. Also, never underestimate the stress-relieving power of a little trash-talk. Herewith, a few of our favorites:

Albany Mystery League: This is cool: Every week, members of this Albany rec league are introduced to a brand-new sport on the spot, taught how to play it for a half an hour, and then go head-to-head in a competition that sounds like it’s three-quarters athletic and one-quarter simply wrapping your head around what the hell you’re doing. The five-game spring season was a big hit, according to Albany Adult Sports Coordinator Heather Robinson, so they’re bringing it back for the summer — exact dates to be announced; stay tuned.

Amateur Bay Sports Flag Football: If I knew the names of a single professional football player, I’d throw it in here, but alas: Live out your (insert favorite player) fantasies in slightly less concussion-inducing form with Amateur Bay Sports, which hosts 9-on-9, 6-on-6, and 4-on-4 flag football games throughout the year, open to singles and groups. The next round of registration — for 4-on-4 co-ed and 6-on-6 — begins next month.

Circle Rules Football: Circle Rules is sort of a football-soccer-rugby hybrid played on a circular field with a large inflatable ball. It’s also, according to everyone who’s ever played it, hugely addictive — and after a long, successful stint as a cult-favorite weekend activity in New York, it’s now made its way out here, currently as a pick-up game at noon on Saturdays.

World Amateur Kickball Association: Hey, there’s a reason you enjoyed it so much as a kid: Kickball is easy to learn and probably easier to play, and WAKA — the international organization with which I played — has plenty of local options, including kickball leagues throughout the year and, now, dodgeball. Registration for the summer season of the Neptune kickball league is set to open sometime within the next month or so, and, as of press time, there’s still space for the summer dodgeball league, which has its first game June 12; registrations open to fully-formed teams as well as free agents.

Mossball: Probably the most informal league on this list, Mossball isn’t even really a league so much as a loose conglomeration of folks who meet up every sunny Sunday for a game and a good time at — you guessed it — Mosswood Park. Games are entirely pick-up; just show up at 2:30 with a glove and you’re good to go.

Albany Drop-in Pickleball: Great name, even better sport: Pickleball’s sort of like life-size ping-pong, played with a wiffle ball and tennis net on a badminton-size court — and, as of this month, the City of Albany is hosting drop-in games every Tuesday night at 6 p.m., no experience necessary (fortunately). Added bonus: You get to be the cool person in the office bragging about the new and obscure sport you play.