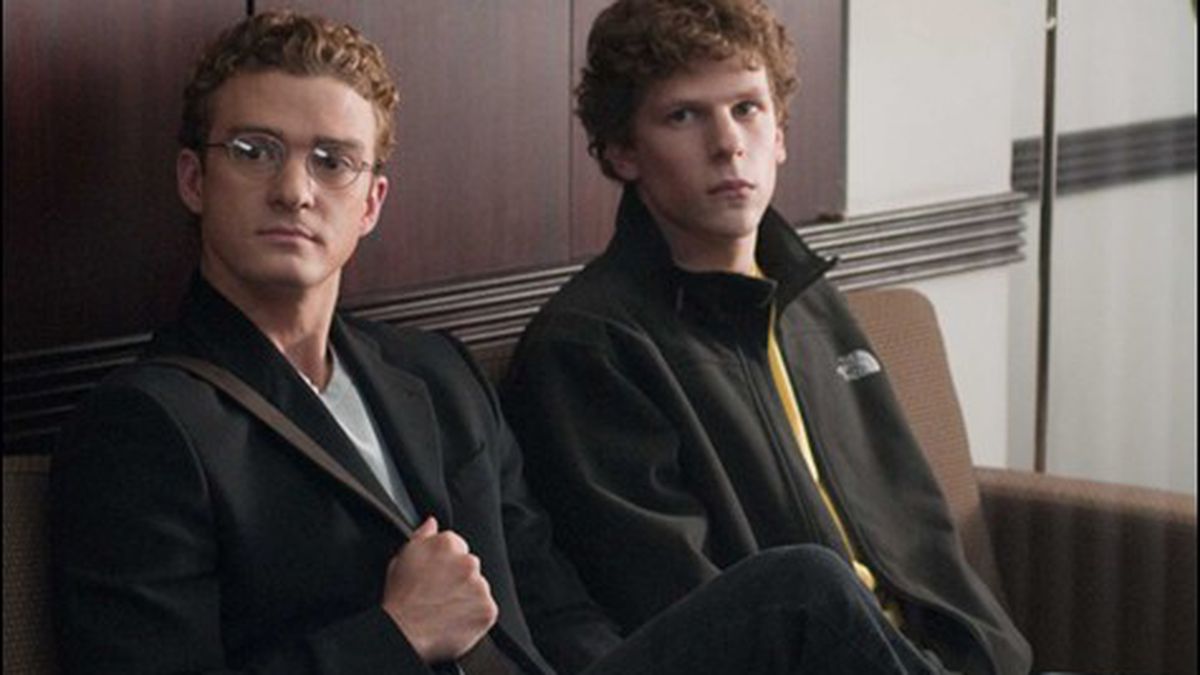 The Social Network and the “F” Word

The billionaire geek who invented Facebook (The Social Network) meets the juvie outcasts of the living dead (Let Me In).

The Social Network is a bland title for such a thrilling, ballsy, intelligent movie — but it’s arguably better than Revenge of the Nerds V or All You Need Is Friends.

Americans are notorious for being entertained by millionaires: pop singers, pro athletes, movie stars, politicians, and, within the past twenty years, fabulously wealthy, game-changing technocrats. Director David Fincher (The Curious Case of Benjamin Button, Fight Club) might have made a watchable film about Bill Gates or Steven Jobs or even Timothy Geithner. But Fincher, Scott Rudin, writer Aaron Sorkin, Kevin Spacey, and the rest of the Social Network team chose the life and times of Mark Zuckerberg, top duke of the Facebook behemoth.

Zuckerberg’s narratively refashioned story, adapted from a book by Ben Mezrich, has everything a hit motion picture needs: young protagonist, sex, cash, and the irresistible human-interest twist of accidental good fortune — the idea that this could conceivably have happened to you, the shlub in the 22nd row, if only you’d studied harder. Plus that elusive ingredient that evidently gave Facebook its competitive edge in the first place, the Harvard factor: Eastern Establishment, old money vs. meritocracy, social clubs, noblesse oblige, etc. The scenario has an obscene amount of fun twisting that image because despite being a nineteen-year-old Harvard undergrad and entitled to the appropriate privileges, nerdy Zuckerberg essentially makes a fortune off his inability to get a date.

When we first meet Mark Zuckerberg (played perfectly by Jesse Eisenberg) in Cambridge, Massachusetts, in 2003, he’s taking coed Erica Albright (Rooney Mara) on a Nantucket Sleigh Ride of verbal abuse. She’s a liberal supporter of causes, methodical and laid-back. He’s a speedy, hyper-intelligent geek who instinctively ridicules anyone who can’t keep up with the machine-like workings of his brain. Fed up, she dumps him, whereupon he goes back to the dorm and insults her in his blog. Mark’s social skills need work. He’s absolutely brilliant but off-puttingly obtuse. Introspection is not his game.

Mark’s disappointed bitchiness attracts the attention of his friend Eduardo Saverin (Andrew Garfield from The Imaginarium of Doctor Parnassus), a business major who sees potential in the combo of Mark’s technical genius and his own market savvy. They click and the concept is born: an online version of the facebooks that social clubs use to choose their members. The key wrinkle is that Eduardo has already been accepted into one of the clubs while Mark has not — he has to settle for a Jewish fraternity. The Harvard thing shifts into high gear when a pair of twin WASP socialite crew jocks named Winklevoss (both played by actor Armie Hammer) try to co-opt Mark and Eduardo’s idea, and Mark beats them to the marketplace. The film takes the form of a user-friendly mosaic timeline of flashbacks and flash-forwards in which Mark defends himself, with extreme prejudice, against lawsuits by former associates wanting a piece of what would become, at last count, a $25 billion, 500-million-user pie.

Facebook takes off, first as “Facemash,” then “The Facebook.” People want to see their friends and rate their acquaintances. Success breeds strange bedfellows. Cue groupies, limos, nightclubs, lawyers, VCs, and the somewhat paranoid West Coast cool of Sean Parker, the man behind Napster (Justin Timberlake), the only one who can talk Zuckerberg into submission. There’s a hilarious scene where the Winklevoss brothers joust with Harvard president and former treasury secretary Larry Summers (played by Douglas Urbanski). While they’re squabbling, Zuckerberg moves to the Bay Area and becomes Master of the Universe. But what he really craves is Erica, the coed he mal-blogged. She’s unimpressed with his billions. Meanwhile, in Scott Adams’ Dilbert, an exec explains: “Marketing through social media is like herding cats. And just to make it interesting, many of the cats are drunk and stupid.”

Special praise to Eisenberg, Garfield, and Timberlake, with Sorkin’s sparkling dialogue in their mouths, for raising the college comedy to vicious new heights. Thanks to Facebook, all the world is just another American university town. That’s progress. Fincher and company take a story that rightly should only be fascinating to people who read Wired and make it fascinating to those who read Benedict de Spinoza’s Ethics. For those who don’t read at all, there’s always the pure utility value of Facebook — if you play your cards right, you might get laid. Everyone can relate to that. In fact, you could skip this movie entirely and spend a couple hours on the site. You’d be missing a gorgeous piece of entertainment, though.

Horror-film mavens might be initially wary of director Matt Reeves‘ Let Me In, Hollywood’s English-language remake of Tomas Alfredson and John Ajvide Lindqvist‘s majestic 2008 Swedish vampire film Låt den rätte komma in, but not to worry — the redo is neither dumbed-down nor especially softened up. In fact, it’s one of the better horror movies of the year all by its chilly self.

SPOILER ALERT: It’s impossible to compare and contrast Let Me In with the Swedish original without revealing a few of the films’ plot points, so continue reading only if you dare.

Both Chloë Grace Moretz (the super crime-fighter of Kick-Ass) and Kodi Smit-McPhee (Viggo Mortensen‘s sniveling son in The Road) turn in strong perfs in the roles of Abby, the mysterious new girl in the apartment block, and main character Owen, an androgynous juvie outsider who finds an unlikely protector. With his outlandish hair and scared-rabbit demeanor, Smit-McPhee’s Owen could be the younger brother of Winona Ryder in Beetlejuice. Adaptor Reeves and young Ms. Moretz opt to make Abby a full-fledged girl — no sex-change scar-tissue money-shot allowed in a soft-R American movie, folks — and she does a wonderful, scary job.

One fairly major complaint: The remake dulls the effect of the centerpiece swimming-pool bully-dunking scene by showing Abby attacking her victims earlier in the film. Overall, there’s less blood ‘n’ guts in the Swedish version. However, the remake does take full advantage of two excellent character actors, Richard Jenkins and Elias Koteas, by building up their roles as Abby’s “Renfield” and the nosy police detective, respectively. The action is set in snowy Los Alamos, New Mexico in the 1980s. Nice job relating vamps and bullies to Nukesville, USA, but why go retro? Let Me In doesn’t need the crutch.