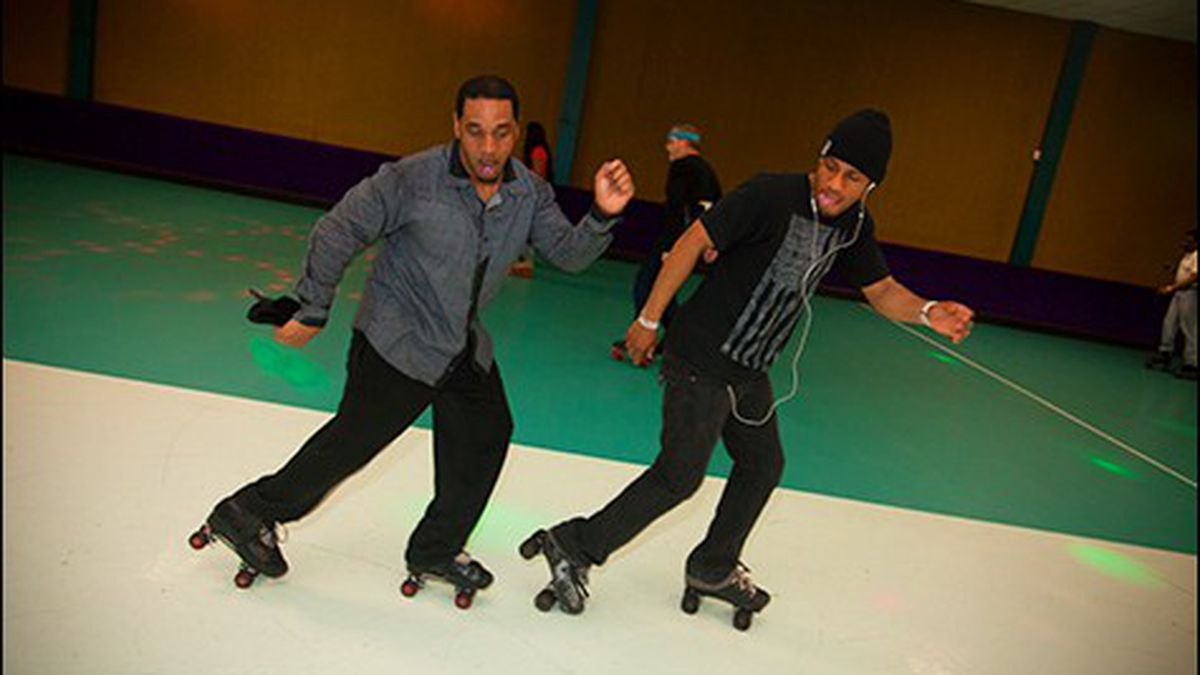 For local roller-skating enthusiasts, The Golden Skate in San Ramon offers one of the last places to practice their art form.

Lights on!” Ginger Mathews yelled, standing in her leather, fur-lined quad skates. Right on cue, the lights popped on, the disco ball started turning, and Marvin Gaye’s “Sexual Healing” streamed through the PA. Wasting no time, Mathews flew around the rink. She was just warming up.

For Mathews, it was just another Wednesday night at The Golden Skate in San Ramon. Some may know it as a place to host a bumpin’ tenth birthday party or glide in tandem with a high school sweetheart, but for Mathews and other accomplished East Bay skaters, The Golden Skate is among the last haunts to practice their endangered art form.

Some skaters are “jammers.” In the middle of the rink, they combine moonwalks and pirouettes into a soulful, groovy ballet. Others, like Mathews, are “rexers,” speed demons who bust moves at high velocities, oftentimes backwards. But regardless of style, roller-skating is about dancing, moving to the beats of bygone disco, funk, and R&B tracks. Seasoned skaters blend a wide repertoire of moves — such as “crazy legs,” a rapid-yet-stationary heel-to-toe motion; “iceberg,” in which skaters don’t use their wheels but slide on the toes of their skates; and breakdancing. These moves are combined into an uncanny display of artistry and athleticism, demanding precision, imagination, and an extreme sense of balance. “Once you set into it and feel the music, you become one with skating,” said fifteen-year-old Maja Stark, one of Mathews’ “skating grandchildren.”

Given her many years of supporting both new and experienced skaters, Mathews, 46, could be considered a mother of The Golden Skate family. Pointing to a full rink of skaters, she said, “No one in here has skated longer than I have…. I’ve got all my kids to skate, my neighbors’ kids, and all the kids at my daycare have skates. I don’t know how many first skates I’ve bought for people. Anyone I can drag down here, I will.”

In fact, Mathews has drawn people from hundreds, even thousands, of miles away to skate in San Ramon. San Diego resident Robin Royal found Mathews through Facebook and met her at The Golden Skate during his recent tour of the Northern Californian skating scene. “It’s a vibrant and active scene here,” he said. But Royal expressed disappointment in the roller-skating options in the Bay Area — or any area, for that matter. “The roller-skating community is so small,” he said. “It’s not that there’s less skaters, just less place to skate. It’s more underground.”

Roller-skating rinks have become increasingly rare in the United States. About four hundred rinks have closed since 1980, according to Jim McMahon, executive director of Roller Skating Association International. “[Roller-skating rinks] are one of the last family-operated businesses,” McMahon said. “What happens is real estate incentives tend to make buildings expensive. Roller-skating rinks don’t have the same tax incentive programs as businesses like Wal-Mart and McDonald’s.” McMahon added that many rinks still in business have received support from the local community. “It’s about people stepping up and saying, ‘Hey, we want to support our local roller rink,'” he said.

Rumors have spread throughout the roller-skating community that San Jose Skate may soon close. (Representatives of the rink declined to comment.) If that happens it would leave the Bay Area with only three rinks left: in Redwood City, Antioch, and San Ramon. Hassan Sharifi, owner of The Golden Skate, explained that running a roller-skating rink in California is especially difficult because of astronomical real estate prices. But he also described “burn-out” among owners who have inherited roller rinks as a family business. “Most of the owners who work in the business get tired of it, depressed, disillusioned,” Sharifi said.

“It doesn’t make business sense to run a roller rink,” he added. “Let’s say that someone has a roller rink that has a $5 million equity. He can take that money and buy a shopping center and get a much higher return.”

A large portion of The Golden Skate family still mourns the 2011 bulldozing of Cal Skate of Milpitas, whose owners sold the land to developers when their admissions revenue couldn’t fund rising maintenance costs. Randy Wong, a roller-skate designer, recalled the last session at Cal Skate, when thousands waited on blocked-off streets to roll on the beloved wooden floor for the last time. “We all cried,” Wong said. “We all took a piece of the floor.”

To cope with the scarcity of US rinks, the skating community has had to band together. Many skaters travel around the country several times a year to skate, and are usually received warmly. “When we go to places, they know us really well,” said Ron Meacham, a longtime skater and close friend of Ginger Mathews’. “They let us stay in their homes, we eat together, sometimes take us around in limos.”

However, most skaters at The Golden Skate would agree that annual skate parties are the real hubs of the national roller-skating community. Drawing skaters from around the country, annual skate parties (or “Jamz”) allow skaters to dress up, show off, and learn new moves. “Those are the types of parties that really bring us together,” said Doug “Fresh” Adams, who has known both Mathews and Meacham for more than ten years. “The love travels out of state.”

But for the majority of the year the members of the Bay Area skate community have each other. “When you can go and celebrate holidays and birthdays, it goes beyond skating — it’s family,” Adams said. But Adams, like others, worries about the future of roller-skating. “I don’t know how to bring it back because we’re losing a lot of rinks,” he said. “We need to pass it on.”

For Ginger Mathews, preserving the skating tradition goes beyond passing it down to her children. For the last few years, Mathews has been planning to open her own rink, which she wants to call “The Skaterz Place.” She has even picked out the perfect location, on Willow Pass Road in Concord. “We’ll see,” Mathews said. “Some day.”