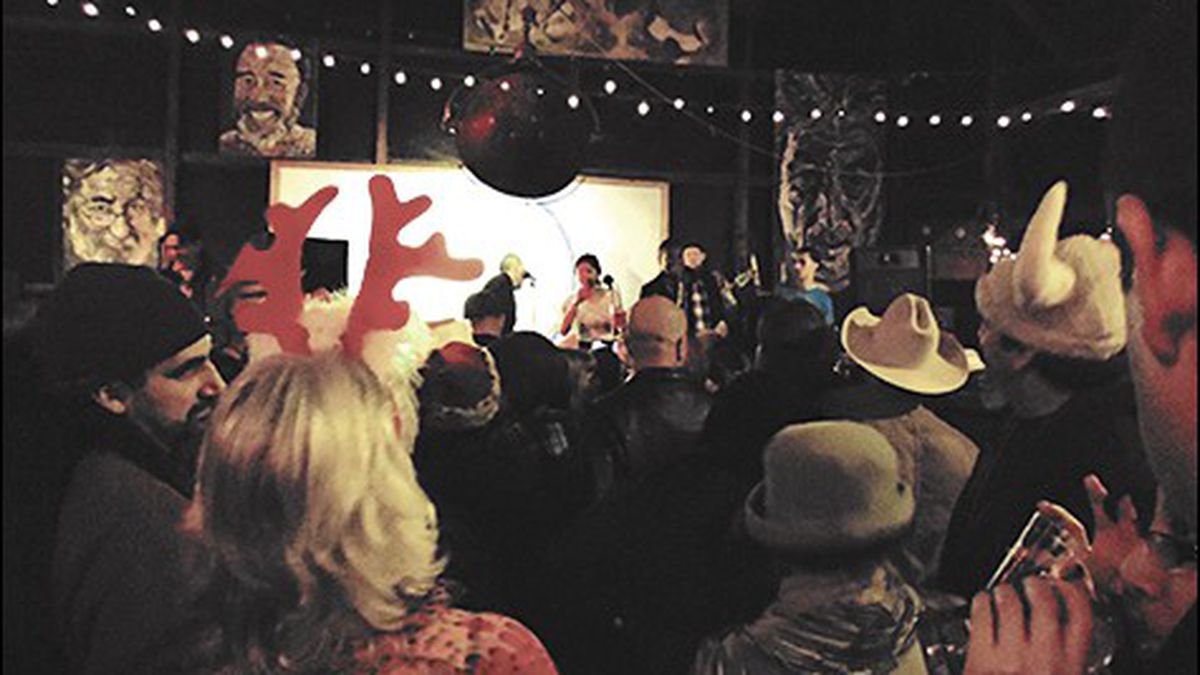 A Party for the Ages

Solstice at the Barn provides a creative escape from everyday life.

Apparently, it turns out, my uncle. He invited me to an event called Solstice at the Barn. “It’s like a mini-Burning Man,” he said. “You get to be yourself and nobody cares.”

My uncle is a real estate agent. He drives a shiny sedan. He’s married, has three children, and owns an impressive house in Orinda. On the surface, he blends into an ordinary weekday like commuters on BART, but he also has a wacky personality that sometimes translates into a yearning for something beyond his routine life. So when he showed up at my house the night of the winter solstice last December wearing his Indiana Jones hat, a long Wyatt Earp coat, and a pair of cowboy boots, I wasn’t really surprised.

We wound through the dark East Bay hills, turned down dirt roads, and finally arrived at the secret location. Directed by glow sticks tied to fence posts and costumed personnel, we came upon a dreamy-looking village: a giant, purple, dome-shaped tent; a whole lamb slowly turning on a spit; bonfires; more tents, and a barn. Curious, I entered the barn. Under multi-colored lanterns, an elderly couple twirled on the barn’s wooden planked floor as a folk band quietly strummed a tune. A hodgepodge of young and old hippies milled around, chatting, eating hors d’oeuvres, and sipping spirits. A Yanni lookalike stood in the corner, nodding his head to the music. By the looks of things, I felt I was in for a long, tame evening.

But soon, a Dixieland band got up on stage and started playing, and the bonfires outside grew taller. People dressed as Valkyries, leprechauns, reindeer, and the Ghost of Christmas Yet to Come began to fill the barn. They swung to the pianist’s stride, the tubist’s womp.

A woman wearing a feathered Peter Pan hat then asked me, “Are you an Oven Virgin?” Before I could figure out how to respond, she said, “Yes, you definitely are. Let’s visit the Virgin Temple.” Before entering the “temple” (actually a large tent), I was blindfolded and taken by the hand. “Become one with yourself and the universe,” a deep, male voice said, before ringing a gong. The vibrations pulsed through my body and for a moment I felt as though I had gone back into the womb. At that point, anything seemed possible. But then it was over. I was led out of the tent, somewhat disappointed. “Oven Virgin Temple” didn’t secretly mean “orgy.”

However, the origins of this New Agey party are rooted in physical pleasure. Lynn Danielle Sugayan co-founded Solstice at the Barn 36 years ago in Berkeley. But back then, it wasn’t Solstice at the Barn, but Solstice at a little Victorian on Kains Avenue, where lowriders rumbled on the street outside, and poets and artists raged to massive drum circles inside. “The house just shook,” Sugayan later told me. “It would get so packed you couldn’t get from the living room to the kitchen.”

The true inspiration behind Solstice at the Barn is Sugayan’s late husband, Joe. In her memoir Lynn and Joe: Peculiar Travel Suggestions, Sugayan details how she met Joe — a sculptor and conga player who was known to only smoke marijuana he grew himself — on the winter solstice, became enchanted by his wild virile energy, and how their parties developed into a celebration of both their love and the ancient Greek tradition of observing the longest night of the year. Their love was a joining of their imaginations, in which “energy,” “muses,” and “new dimensions” were as common as rent and morning coffee. “There was only one god as far as he was concerned, and that god was him,” Lynn said. “He wanted me to see him as that god. My only condition was that he saw me as his goddess.”

In 1992, the Sugayans moved onto a property in the East Bay hills, where they found an old redwood barn suited perfectly for their solstice celebration. But only years after they had settled, Joe died of unknown causes. “He went from a vigorous living man to someone who suddenly wasn’t there,” she said.

Though Sugayan remarried, Joe remains a strong presence in her life: His portrait hangs on one of her walls, and his wooden sculptures sit in every room of her house, which was also built by Joe. She’s now working on the sequel to her book, which describes how the solstice parties grew and changed in the years leading up to Joe’s death. “I didn’t see how I could do [Solstice at the Barn] after Joe died,” Lynn said. “The party has taken on a life of its own.”

Much of the party’s new life has come from R.C. Ferris, known to her friends as “Dumpster Diva,” who took over much of the party’s planning process after Joe’s death. Ferris, a recycling coordinator at Republic Services, a waste services company in Pacheco, teaches children the art of reuse. She uses her skills to decorate the property and endow it with a dreamlike aura. She also coordinates the “barn crew,” a group of volunteers who help set up the party months in advance. “It takes a whole village to put this party on,” Ferris said.

While the event is invite-only, it has grown quite popular in recent years, attracting party-crashers looking for a venue to get trashed. “I need to find a way for people to forget about it,” Sugayan said. “It feeds something that’s missing in our citified lives.”

Pat Rusich has attended Solstice at the Barn since 1990 and has also performed belly dancing, fire spinning, and what she calls The International Human Color Wheel Project, a dance in which multi-colored sashes are connected to people to form a colorful wheel, at the event. “It’s interesting because I have this reason for being,” she said. “The reason is the Color Wheel. I don’t care about how money I make; I just want to see the Color Wheel happen.”

“There’s this ordinary world out there,” Sugayan explained. “We’re in it all day long. We go to the gas station, the grocery store, pay our bills, have our careers, but when we’re out here, at the barn, it’s almost as if we’re in this special creative vortex. Even when nobody’s here, the energy is still here.”