.The Port’s Debt Problems Will Slow Army Base Project

The Port of Oakland's $1.3 billion of debt means that it has no money to complete the second phase of the massive project, thereby delaying promises of thousands of new jobs. 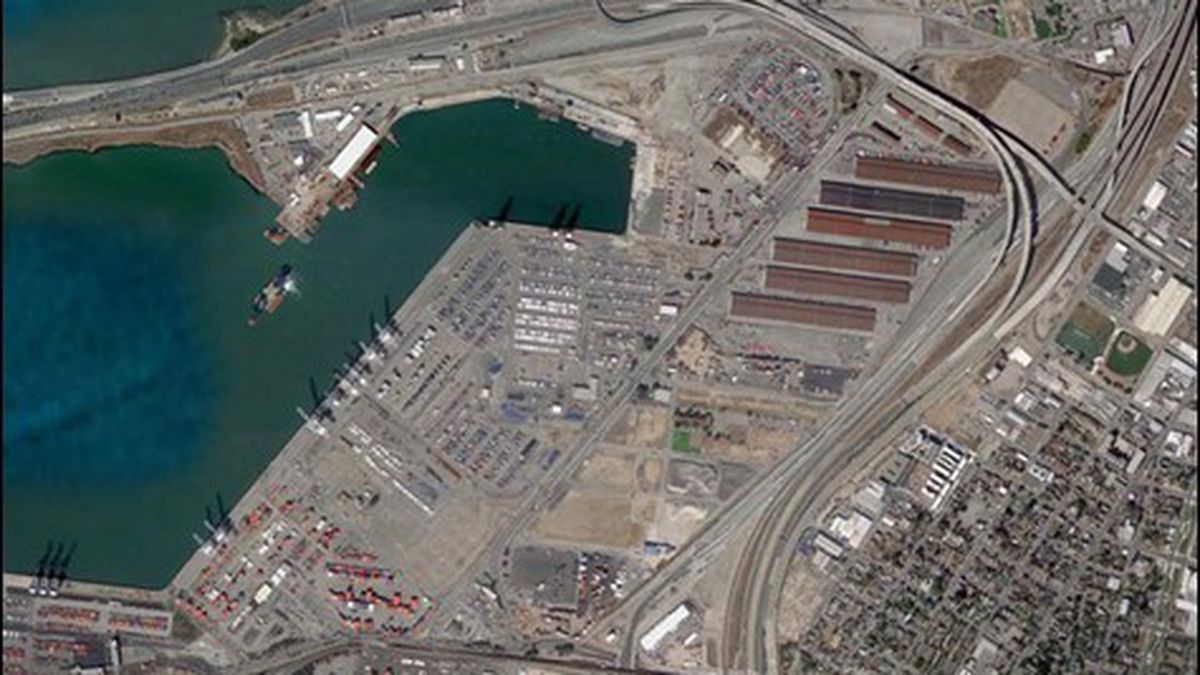 As developers for the City of Oakland get ready to break ground on a massive overhaul of the former Army Base this year, there’s a growing concern that only a portion of the project will be completed this decade because the Port of Oakland is short on cash. The port is choked with debt from past construction projects and has failed to secure the $600 million it needs to fully redevelop its half of the base. The financial shortfall not only threatens the port’s future competitiveness, but also could mean that it will take a long time to fulfill promises of thousands of new jobs in West Oakland.

A few weeks ago, the chief financial officer for the Port of Oakland, Sara Lee, apologized to the Port Commission during a presentation on the public agency’s finances. “So sorry for all of that news,” said Lee. “I know that it’s a little bit sobering.”

The port, she said, has $1.3 billion in outstanding debt, as well as $900 million in unfunded capital needs. Lee characterized the financial condition of the port as “challenging.” “I wish I had better news to share,” she added. “The economic and competitive climate that we work in, coupled with the $1.3 billion in outstanding debt, continues to put tremendous pressure on port revenue.”

The port’s financial problems also could harm its ability to compete against the ports of Los Angeles and Long Beach and against those on the eastern seaboard. Currently, the Port of Los Angeles has an annual capital improvement program of $400 million, while the Port of Long Beach has $700 million for capital upgrades. The Port of Oakland, by contrast, has just $31 million a year for its maritime operations’ capital needs through 2017.

And some experts say the port’s financial problems could harm its future standing as a major US port. Alan Erera, an associate professor at Georgia Institute of Technology who specializes in transportation and logistics systems, said an expansion of the Port of Oakland via the redevelopment of the base is vital for the port’s competitiveness. “It’s important for Oakland to begin to upgrade its facilities now if it wants to continue to be a major player,” he said.

Oakland, like the rest of California, is slowly watching its container shipment business being “leaked” to the East Coast, Erera said. “California faces the possibility of losing the lead market share unless it has the capacity to increase its seaports.”

Port and city officials had hoped that the full redevelopment of the four-hundred-acre Army Base, which would include a significant expansion of the port’s maritime operations, would not only be a boon to imports and exports at the seaport, but also would boost the local economy when coupled with the city’s redevelopment project. But it may be a long wait before those dreams can be realized.

The overhaul of the base, which is expected to cost $1.3 billion in total, is divided into two phases. Phase One is expected to be completed by the end of 2015, and is being developed by the city and the port together, financed by a mix of public and private money. It’s estimated to cost about a half-billion dollars — $260 million from the city, the port, private, and federal funds, and $242 million from state matching grant funds.

The bulk of the city’s project will occur in Phase One. In the coming months, it will result in new roadways, utilities, soil stabilization, and environmental remediation work. Prologis Inc. and California Capital & Investment Group are the development team on the city’s half of the base.

But the port doesn’t have the funds to finance Phase Two — the portion of the project that is expected to create more jobs. Phase Two includes a new intermodal rail terminal, extensive work on 7th Street, and logistics warehouses, according to a recent report to the city.

Oakland city officials said they are eager to see the Port of Oakland raise the funds necessary to complete Phase Two. “The vision for this project was always one vision, one project, one team,” said Assistant City Administrator Fred Blackwell. “So our ideal scenario is that the port implement Phase Two as soon as possible. It just makes for easier coordination, it makes for fewer technical difficulties in terms of infrastructure development, as well as the job numbers, which will probably double when you put the port’s property into play. So from our perspective, the sooner the better.”

According to a September 2012 study done for the city by Keyser Marston Associates, Oakland would stand to gain tax revenues of roughly $2.9 million a year if both Phase One and Phase Two are completed. The money would be divided among the city, the school district, the county, and AC Transit. Blackwell said the study also found that, counting all job types (permanent and temporary), Oakland could see about 5,000 jobs created from the full redevelopment of the Army Base.

But as it stands, the port has no real timeline for when it will be able to begin Phase Two, because the agency does not know where it will get the funds. In the past, the port issued bonds to pay for many capital projects. But now those bonds are choking the port’s budget. Port officials said in a statement that it is “highly unlikely” that the port would be able to issue any bonds to pay for Phase Two because by 2016, the port will have yearly debt service payments of $105.7 million. And about $98.5 million of that amount will go to pay off bond debt.

So what does that mean for the Army Base redevelopment? When asked if the funding gap was a concern, Port of Oakland Maritime Projects Director Mark Erickson said, “Absolutely. If we can get everything in place within the next twelve months that’d be great, but at this point that looks unlikely, so we’re probably looking at a longer time horizon.”

In an email, port spokesman Isaac Kos-Read said the port’s administrative staff is “reassessing” funding strategies and will make a report available to the port board sometime this month.

“There aren’t other West Coast ports that have this type of amazing opportunity,” Erickson said. “With this project, we have a four-hundred-acre space right next to the port that has the ability to take some of these large shipping interests, these big companies who ship a lot of product around the globe all the time where they are importers or exporters, and they’re now going to be able to set up right at the Port of Oakland a huge distribution center. That creates a huge opportunity for the port to become this hub of trade activity for the whole country, really.”

And despite the port’s current financial constraints, most port and city officials believe that eventually Oakland will see its Army Base fully redeveloped. “I’m confident we’re going to get it,” said Erickson. “My concern is how long we will have to wait. If it takes ten years, then that would be a huge bummer.”

Correction: The original version of this report misidentified the projects proposed for the port’s Phase Two development.

Next ArticleWednesday Must Reads: Fracking Bill Advances in Legislature; California to Merge Cap-and-Trade Market with Quebec