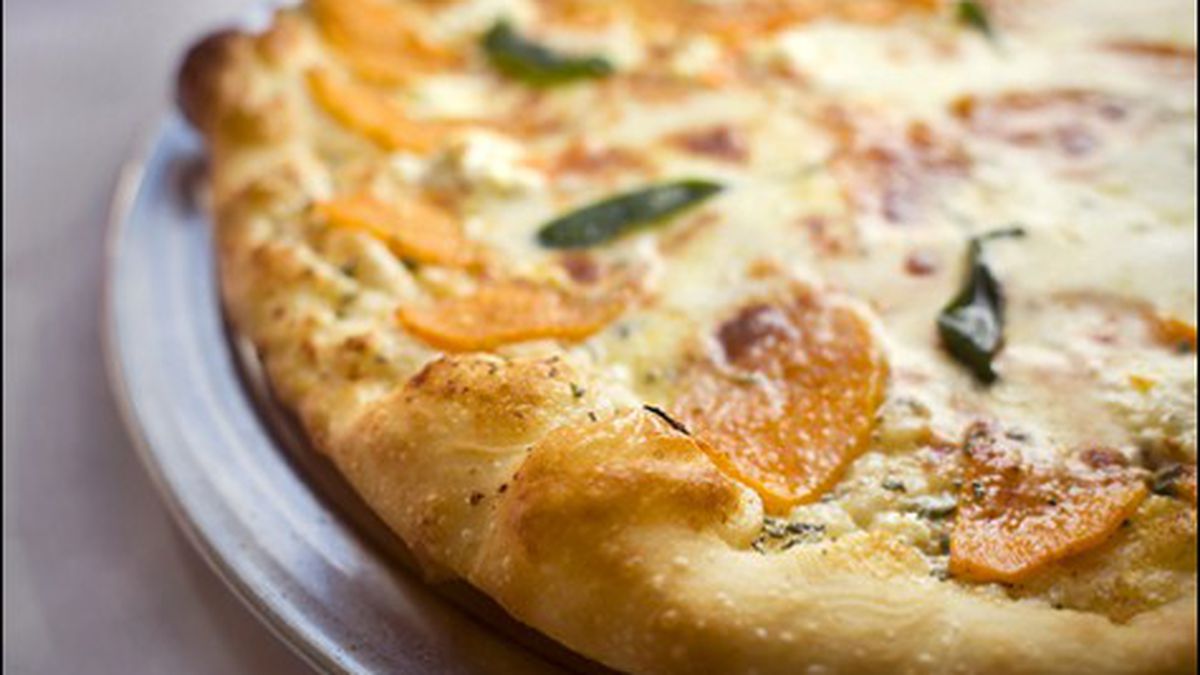 The Pizza Revolution Marches On at Addie’s Pizza Pie

Pizza has evolved and prospered in so many different directions over the course of its itinerant history that it’s hard to know at this point just what to make of it. Is it the celebratory meal you gobble up when your Little League team wins the pennant? Is it the emergency nosh you order in when a bunch of friends show up at your apartment with a pair of six packs? Is it the dreamy delicacy that tastes better on the streets of Napoli than anywhere else in the world? Is it Chicago deep-dish or New York thin-crust or one of the top-drawer California-style creations crafted at Pizzaiola, Boot and Shoe Service, or Emilia’s?

Take the pizza at Addie’s Pizza Pie, which opened in mid-September under the auspices of Jennifer Millar of Sweet Adeline Bakeshop and Tom Schnetz of Doña Tomás and Flora. This is thin-crust New York-style pie, not wafer-thin like at Boot and Shoe Service but with the West Coast sensibility that embraces butternut squash and brocolini as well as mozzarella, mushrooms, and pepperoni. The squash, for instance, starred in a Winter Harvest pie that pushed the pizza concept almost into dessert territory, contrasting the sweet veggie with rich goat cheese and bits of smoky fried sage. (Two of us disliked it, one could take it or leave it, I loved it.) The Derby featured the brocolini along with crushed tomatoes, ricotta, and grated lemon peel, and achieved something unusual for a pizza: It was refreshing. The Southside seemed like a classically hearty sausage-tomato-black-olive pizza at first, but was draped with long filets of spicy fennel that gave the pie a uniquely sweet and earthy bite. Our favorite was the Bianco, a cheesy, olive oily, soul-satisfying treat with plenty of sliced mushrooms and thyme-scented fontina melting together atop the house’s crisp, light, puffy crust.

Of course no biped can persist on dough, mozzarella, and fried sage alone, so Addie’s offers several roughage-rich salads to accompany your pie. Their chopped salad was light and refreshing yet absolutely satisfying, accenting bite-size leaves of crisp romaine, snarky radicchio, crunchy celery, and sweet, pungent fennel with chunks of puckery feta cheese, a handful of fried capers, and a tart, lemony vinaigrette. The citrus salad offered a nice combination of tastes and textures — Cara Cara oranges with goat cheese and black olives — but the leaves of Bibb lettuce were unwieldy and didn’t absorb the flavors successfully. No quibbles about the warm spinach salad, though. More of a rich vegetarian side dish than a run-of-the-mill bowl of tossed greens, it featured lots of meaty sautéed mushrooms and crunchy bits of hazelnut along with a bushel of lush, earthy braised spinach dressed with a sherry-shallot vinaigrette that imparted a marvelous depth of flavor to the whole. There are other sides as well: an antipasti platter of prosciutto, olives, pepperoncini, provolone, crostini, and two kinds of salami; and a delicious trio of big, peppery, coarsely ground meatballs served piping hot with a piquant tomato sauce, a blanket of melted mozzarella, and spears of crostini.

The highlight of the dessert menu is frozen custard, an East Coast specialty seldom encountered hereabouts. To our untutored palettes it tasted a hell of a lot like ice cream, but in any case was light, lush, and smooth as silk, and the coconut varietal was pleasantly subtle in flavor. You can get it au naturel or in three kinds of float: traditionally with Capt’n Eli’s Root Beer, more rambunctiously with Old Rasputin Russian Imperial Stout, or as affogato doused in strong (too strong?) espresso. There’s also a seasonal fruit tart on the menu; in our case it was a heavy, bland pear thing with minimal fruit flavor overwhelmed by the marzipan in its overabundant crust. A better option was the chocolate pave, a rich, dense, moist, and yummy flourless cake with lots of dark, earthy chocolaty flavor.

A pizza joint might not be the first place a vegetarian would look to for sustenance, but Addie’s happens to be ideal for flesh-free dining. More than half of the pizzas are meatless: the Winter Harvest, the Bianco, and the Derby, plus a tomato-mozzarella margherita and the Greek, crushed tomatoes with spinach, red onion, Calabrian peppers, and feta. And beyond the chopped, citrus, and spinach salads there’s a garden salad of greens, cucumber, carrots, tomatoes, and buttermilk herb dressing.

The restaurant is housed in a landmark bank building designed in 1906 by John Galen Howard, the supervising architect of the University of California. It’s a striking setting, with enormous Palladian arched windows and mottled terrazzo flooring, but the sturdy high-ceilinged and thick-pillared Teddy Roosevelt-era ambience tends to overwhelm that fun sense of intimacy you want in a family pizza parlor. When live jazz is performed in one tiny corner of this huge expanse, the music tends to dissipate up into the echoing rafters among the clatter and conversation. There’s an open kitchen, as well, but it’s pretty lifeless; having a display chef or two tossing dough up into the air would do wonders for the atmosphere. We did like the dozen-seat wine bar and the big red booths with classic red-checked tablecloths, though, and once you settle in with your spinach salad and Trumer Pils and hot slice of pie, lesser considerations tend to fade into the background.

Your Daily Lick: The Crymuscles

Most Unlikely Venue for Board Game Geeks