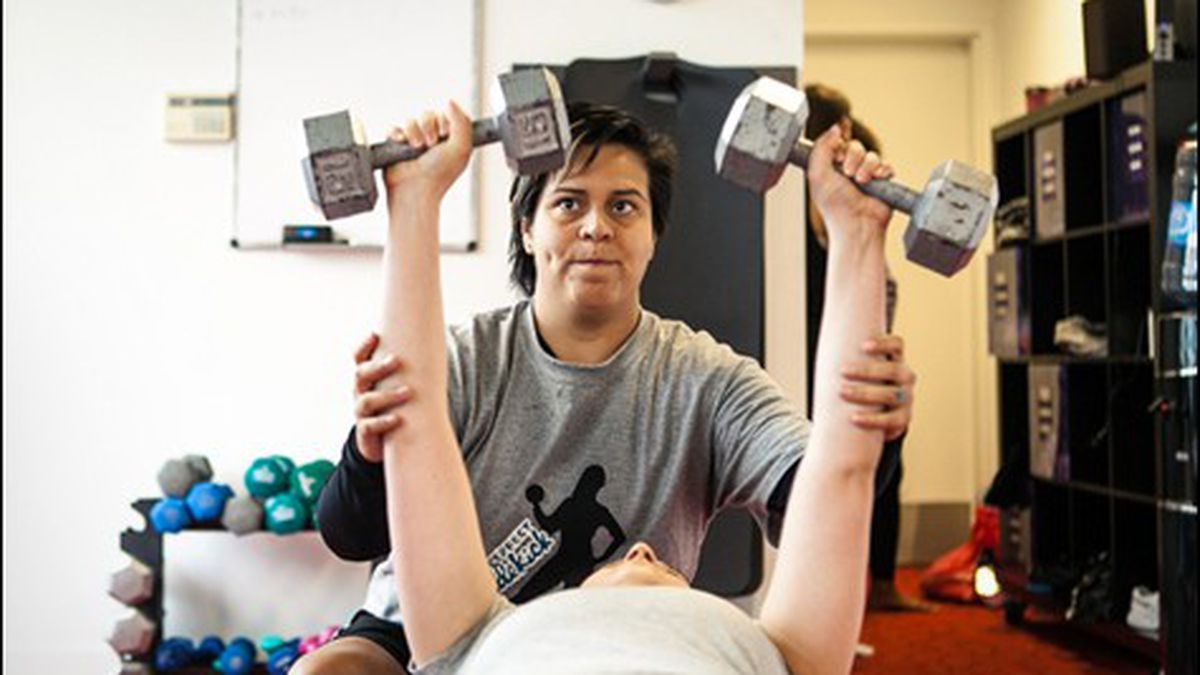 Nathalie Huerta is well aware of the stereotype that lesbians are drawn to careers in physical fitness. “Lesbians, we like sports, we’re jocks, and just like how every lesbian wants to open a club at some point, every lesbian wants to be a trainer at some point,” she said. But when Huerta became a certified personal trainer in 2006, she couldn’t find a workout space that catered to the lesbian community.

“I posted an ad in the ‘women for women’ section on Craigslist,” Huerta said. “I knew that in order to stand a chance in a diluted, competitive fitness market, I had to be different. I Googled some stuff and came to the conclusion that there weren’t any gyms that branded themselves as an LGBT gym.”

Seeing a niche that needed to be filled, Huerta opened The Perfect Sidekick, the Bay Area’s only gym specifically catering to the lesbian community. Since opening in July 2010, the small gym located in the Jack London District has grown to 120 clients; membership increased by 25 percent this past February alone.

Huerta herself has dealt with weight issues, and she knows she’s not the only lesbian looking to lose a few pounds. According to a study from Boston University’s School of Public Health, lesbians are almost three times more likely to be overweight than heterosexual women. Huerta, blown away by this statistic, wants to whittle away that percentage.

“Being overweight, you don’t like shopping because nothing fucking fits,” Huerta said. “That’s still the burning feeling that keeps me up at night. I want to help people upgrade.”

Rory Walsh and her partner Linda Griffith, both in their fifties, started working out at The Perfect Sidekick at the end of January to get ready for a vacation. Since they joined, Walsh said they’ve found an accepting community. “We are doing exercises and weight lifting that we never thought we could do, and Nathalie has such a positive yet strong way of encouraging you to do more and to do your best,” she said. “It makes you want to do it even if your legs are on fire or you can barely breathe.”

Considering the large population of lesbians in Oakland — one of the highest per-capita in the country — The Perfect Sidekick’s popularity makes sense. But what has surprised Huerta is another demographic that’s been drawn to her gym — straight women.

Huerta says 25 percent of her clients identify as heterosexual. “For the straight clients, the safe space comes into play,” she said. “They ask, ‘I’m not gay, but can I come? Overall, it’s not just an LGBT issue; women in general don’t feel comfortable at the gym.”

Sue Sweilem used to be a member of a popular gym chain, but she said she didn’t feel comfortable working out there. “My trainer kept on hitting on me and was pretty aggressive,” she said. “He kept trying to get me to do private training that was really expensive, and he kept trying to get me to work out with him. Eventually, he was trying to convince me into out-of-the-gym sessions so we could hang out after …. I had to cancel.”

Sweilem became a member of The Perfect Sidekick in January after searching for a group-training facility online. She said that while she initially felt a little hesitant to join an LGBT gym, she has found a close group of friends. “At first I was worried that I would be or feel out of place, but it’s not like that at all,” she said.

Lillian Miller, who also identifies as straight, said she was always put off by the amount of men at mainstream gyms. “Before I couldn’t really do what I wanted to do at the gym because the guys were there,” she said. It wasn’t until she found The Perfect Sidekick that she started feeling comfortable working out. “I love that I can wear what I want.”

It’s not just the fact that the gym caters to women — after all, the concept of an all-female gym isn’t new. But clients of The Perfect Sidekick say it’s the sense of community that keeps them coming back.

“We all check in on each other if we don’t show up to classes for days in a row,” Sweilem said. “Actually, at one of my last classes we were jogging around the building to warm up, and I happened to have an asthma attack. Luckily, one of the girls ran by me and was trying to help me, but since I couldn’t really talk she instinctively ran back to the studio to look for my purse to find my inhaler. This wouldn’t happen at a 24 Hour Fitness.”

“The Perfect Sidekick has a much more homey nonjudgmental feel, pushing folks to do hard work and be their best but also within their own individual limitations,” Walsh said. “Everyone is extremely positive and open to all shapes, sizes, and abilities.”

Perhaps most evident of the gym’s nonjudgmental feel is the lack of mirrors of the walls — usually a gym staple. Huerta said it’s important to her that The Perfect Sidekick provides a clean, welcoming environment. Thus, Huerta installed burgundy carpets, hung inspirational posters on the wall, and painted the bathroom walls with vibrant splashes of yellow, blue, and red paint. Her office features turquoise leather chairs and leopard-print pillows. “I’m sick of LGBT businesses having divey shit,” she said. “Even the clubs, they’re just kind of wherever they let you have them. I’m from LA, so I’m into shit looking nice.”

That kind of no-nonsense talk is what initially attracted trainer Vince Som, the only male and one of the two straight trainers at The Perfect Sidekick. He first noticed the business’ sign out front, which read, “Fuck the recession: one year in business.” “Here they’re more open to speak their mind and more open to listen,” he said. “They’re typically much less politically correct, and they’ll say whatever’s on their minds. You get the occasional ‘your mom’ jokes.”

With The Perfect Sidekick’s popularity continuing to rise, Huerta, who earned her master’s degree in business administration from Mills College last December, hopes to move to a larger warehouse down the street by this summer. She envisions having a space that includes showers, a yoga room, locker room, and a juice bar. Then she wants to expand to other cities: Long Beach, Miami, New York, Atlanta, Washington, DC. Regardless of how large her business may get, though, Huerta said she always wants The Perfect Sidekick to be a close-knit community.

“[Clients] just want to hang out,” Huerta said. “I’m, like, ‘Sure, let me just bring my espresso machine from home, get this thing going.'”

‘Not Ur Baby Pt. II’ Is Not Your Average Art Show