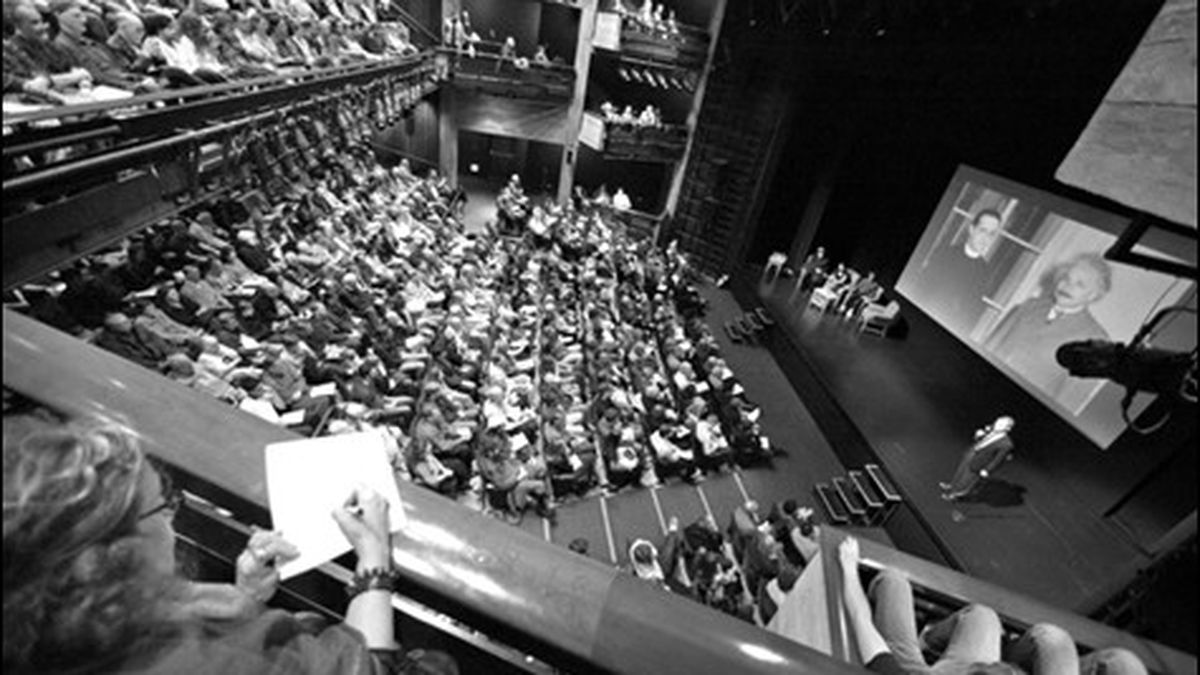 A lecture series produced by Friends of Berkeley Lab brings high-level research to the theater — and the people.

It’s hardly hyperbolic to call the Lawrence Berkeley National Laboratory a prodigious institution. A subsidiary of the US Department of Energy, the scientific research center employs some 4,200 people, has served as the workplace of sixteen Nobel Prize-winners, and has housed groundbreaking experiments leading to, for example, the discovery of thirteen chemical elements. With all of the complex and confounding science being studied behind the lab’s doors, its location — high in the Berkeley hills, far from the everyday bustle of the city — is somewhat symbolic. As with the work it supports, the laboratory’s perch evokes an air of exclusivity and mystery. That helps explain the impetus behind Friends of Berkeley Lab, a lab-sponsored initiative for public talks and tours to promote understanding of some of what happens within.

If there’s one Friends-produced program than can help dissolve any real or perceived barriers between the lab and the general public, it’s the Science at the Theater series, which brings the public and Berkeley Lab scientists together for a free panel discussion and Q&A session about six times a year at the Berkeley Repertory Theatre (2025 Addison St., Berkeley). The program affords researchers a chance to discuss their work and allows audience members an opportunity to ask questions about topics like converting plants to fuel, building net-zero-energy homes, and harnessing the powers of nanoscience.

For the less-than-science-savvy, the subject matter can still seem dense, but organizers like Dan Krotz, a Berkeley Lab science writer, believe that a gracious littering of layman’s terms and the Q&A periods that follow each discussion help elucidate scientific research that is arguably relevant to everyone. “These lectures are meant to engage the public in a conversation about what we do — and, more importantly, why we do it,” Krotz said. “It’s an opportunity to help people see why there are folks up on the hill studying these sort of sometimes arcane things.”

The next lecture in the series, titled “Health Detectives: How Berkeley Lab Scientists Are Uncovering the Mysteries of Disease in Unlikely Places,” on Monday, April 23, features presentations by four life scientists who are working to understand how human biology engenders various diseases, in hopes of one day finding treatments. Attendees will have a chance to hear and question world-renowned breast cancer researcher Nina Bissell, learn about research into the causes of Huntington’s disease from Christie Canaria, and pick the brain of Susan Celniker, who’s working to understand the human genome by studying fruit flies. They’ll also hear from Gary Karpen, director of the lab’s Life Sciences Division, about nascent research into how epigenetics, or external factors, can cause disease independent of one’s given DNA. And while Karpen is more accustomed to delivering lectures to scientific audiences, neophytes can rest assured that he’ll be merciful. After all, he’s had years of practice trying to explain his work to friends and family. 7-9 p.m. FriendsofBerkeleyLab.LBL.gov