.The Other Noodle Soup 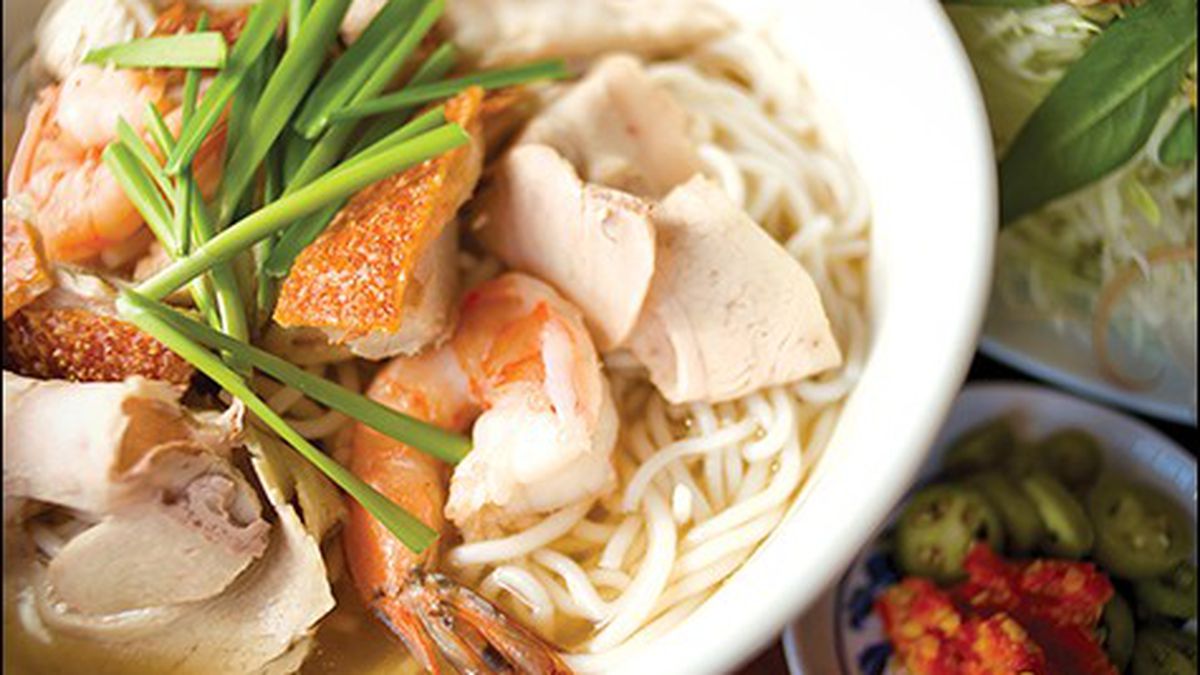 To understand what sets East Oakland’s Bun Mam Soc Trang apart from a more Americanized Vietnamese restaurant, look no further than the dab of mam ruoc, or fermented shrimp paste, that comes with several of the noodle soups. Mud-colored and airily mousse-like, the sauce has a salty pungency that commands your attention.

Tonier Vietnamese restaurants often won’t serve the stuff, for fear that Westerners will find it too stinky, but here, mam ruoc is presented as matter-of-factly as ketchup or table salt — a dollop to spoon judiciously into your broth, adding a rounded depth of flavor and a booming umami bass note.

Bun Mam Soc Trang is the kind of place that embraces the funk. It’s where an adventurous eater can feast on pig’s blood and half a dozen different fermented fish products. But because the service is so warm, and because, ultimately, most of the dishes share more of a kinship with Grandma’s chicken noodle soup than what gets featured on Bizarre Foods, Bun Mam is also a place I feel comfortable bringing a novice to the cuisine — someone who likes pho but hasn’t delved any deeper.

If there’s a better Vietnamese restaurant in the East Bay, I haven’t found it yet. The tiny, family-run breakfast and lunch spot opened four years ago in a section of East Oakland that’s set far enough off the main drag of Southeast Asian eateries on International Boulevard to feel like a still-undiscovered secret — this despite the fact that on weekends the line for a table often stretches out the door. It’s a mother-daughter project: Dieu Tran, the main cook, opened the place after having spent more than twenty years cooking at other people’s Vietnamese restaurants. Her daughter, Hien Tran, runs the front of the house with the friendly efficiency of someone who has been doing it her whole life, though, of course, she hasn’t.

The restaurant has the no-frills feel of a place that’s been around forever, down to the modest red awning out front and the old-school laminated menu, which consists almost entirely of two categories: noodles and broken rice plates.

The soupy noodle dishes, in particular, are knockouts. The signature dish, bun mam, is a rice vermicelli soup with origins in the Soc Trang province of Vietnam. Oakland has dozens of pho restaurants, but relatively few that serve bun mam. The foundation of the dish is a rich, clean-tasting soup made by slow-simmering pork and chicken bones for eight hours, then infusing the broth with fermented mudfish (the mam), lemongrass, and other herbs. The soup had a subtle tanginess, but it was also more delicate than you’d expect from a dish whose most prominent ingredient is pickled fish. In addition to slippery, spaghetti-shaped rice noodles, the bun mam also had A-plus toppings: gently poached shrimp, chunks of catfish, paper-thin slices of succulent pork belly, and, for an extra dollar, a pile of Chinatown-style cubes of crispy-skinned roast pork. A plate of fresh herbs — similar to what you get with pho — included thin shavings of banana blossom, which added a pleasant citrusy crunch.

The bun mam was so good that I found it difficult to want to order anything else. But the bun rieu, which added tomatoes and simmered crab shells to the same basic soup base, turned out to be just as satisfying. The highlight: uncommonly light and flavorful pork meatballs, made by adding the tomalley and juices from the crab heads — fluffy meat clouds spiked with ocean umami. A dish of fermented shrimp paste came on the side.

And one of the better versions of bun bo Hue I’ve had featured thinly sliced beef shank, pork patty (like porcine fish cakes), and a herb-infused beef broth spiked with house-made lemongrass chile sauce, with more on the side (and more mam ruoc) for mixing in. Go big if you want to clear your sinuses, or omit the condiments altogether if you want a lighter, more pho-like experience.

For both soups, pork blood cakes — like tender cubes of offal-flavored Jello — were added by request.

This is home-style food prepared the way that a skilled Vietnamese home cook would make it. It’s what the younger Tran says she ate every day growing up. Indeed, the various broken rice plates on Bun Mam’s menu are pure comfort food if you grew up eating that kind of thing. These were more typical of what you’d find at other Vietnamese restaurants around town: assorted grilled meats, shredded pork skin, and crisp-edged shrimp cakes served in various combinations, with or without a fried egg on top. One of the more unusual offerings featured Korean-cut beef short ribs, nicely charred but soaked in a sweet Vietnamese-style marinade. Here, as with the soups, small details made the difference. The broken rice — tiny grains broken during the milling process, yielding an appealing, couscous-like texture — was perfectly cooked and topped with small cubes of fried pork rind, for an extra bit of crunch and richness. The nuoc cham (Vietnamese fish sauce) that you pour over the rice was more pungent, and less sweet, resulting in a better balance of flavors.

Because Bun Mam is only open for breakfast and lunch, the biggest crowds show up on weekends, when it can be tough to snag a table without a twenty- or thirty-minute wait. It’s worth it, though, if you want to try some of the more adventurous dishes, only available on the weekend. That’s where you’ll find a kind of cold noodle dish studded with pickled carrots and daikon radishes, everything tossed in a spicy fermented anchovy dressing, similar to what’s used to season the bun mam. It’s perfect to help cool you down on a hot day.

You’d also be wise to order the chao long, a very fine porridge — similar to one made with, say, millet — that’s topped with pieces of fried cruller and a panoply of pork organs: slices of tongue and liver, blood cubes, awesome rau ram-stuffed blood sausages, intestines, and other nasty/tasty bits I couldn’t quite identify. If you’re an offal lover, this, truly, is the breakfast of champions.

Next ArticleMid-Week Menu: Cask and Philz Open in Berkeley, and Roli Roti Acquires a Huge New Production Facility in Oakland