PuppetPLEX is reinventing the traditions of puppetry with digital productions, activist theater, and wild creations. 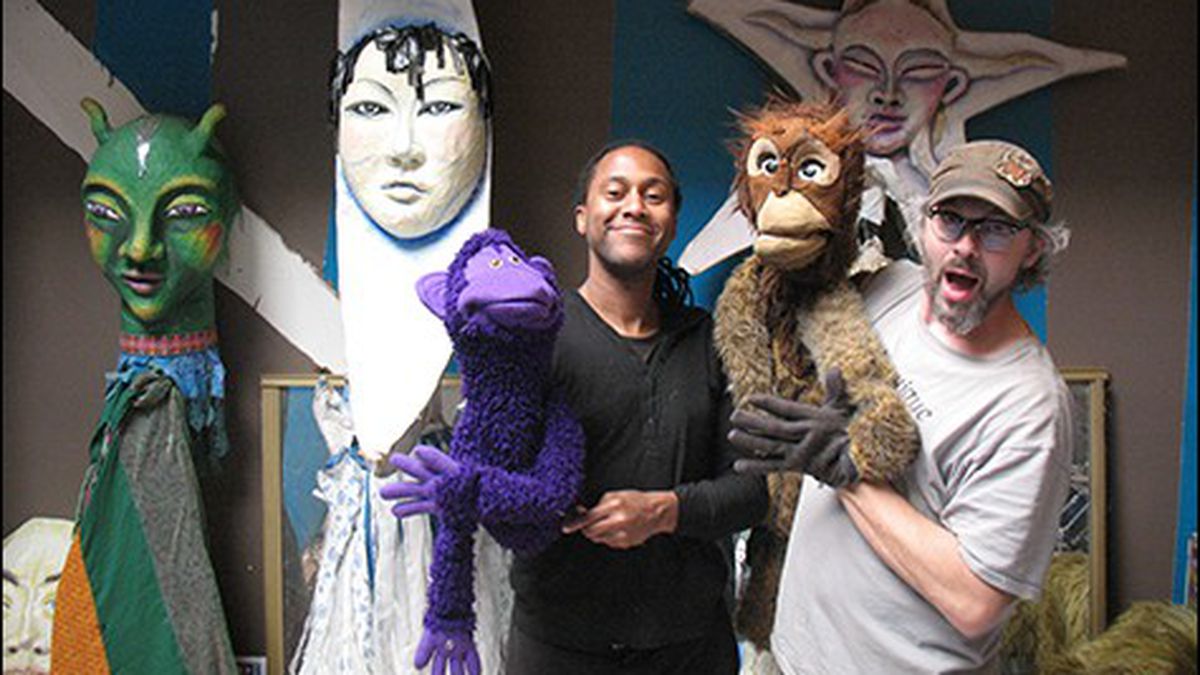 Sitting on top of an elevated platform they recently built inside their cluttered warehouse in North Oakland, Sirraum Nash and Jonathan Youtt described their vision for a moving marionette bridge. “An engineering feat!” said Youtt, gesturing wildly as he explained his and Nash’s plan to construct a narrow catwalk close to the ceiling of their studio from which they would be able to maneuver marionettes. What would make this structure unique is that the puppets would be attached to tracks, allowing Nash and Youtt to move them both side-to-side and forward and backward. “You have a third dimension to work in. That’s something I’ve never seen,” Youtt said.

The project seems almost impossible in the roughly 800-square-foot studio, but it is these kinds of ambitious ideas that define PuppetPLEX, a new Bay Area artist collective that Nash and Youtt hope will breathe new life into the longstanding tradition of puppetry. The collective occupies one of about ten studios inside an impressive warehouse that’s also home to welders, photographers, woodworkers, bike-builders, and other creators.

The PuppetPLEX, which launched this year, has eight core members but is looking for more collaborators. The founders aim to attract longtime puppeteers who might benefit from the rehearsal space and shared equipment as well as artists in other fields who want to incorporate puppets into their own projects.

“There are so many things that puppets can do to either educate or just to give you some shock value or to get a good laugh from,” said Nash. “We want to explore all mediums.”

The group is currently raising money via Indiegogo to help build out the space, an endeavor that began with the construction of a loft level that added roughly 400 square feet to the studio. For starters, this gives the team a larger space to store the more than 250 puppets they have accumulated — a diverse mix of creations, some as tiny as finger puppets and others that are more than thirteen feet tall, from all over the world, made from a wide range of materials. The collection includes hand puppets, marionettes, humanettes (which allow a person to have the appearance of a puppet body), full-costume puppets, backpack puppets, shadow puppets, and more.

The expansion of the studio will also allow the artists a larger rehearsal space as well as a second-story “sewing loft” with the necessary resources for puppet-making. In addition to ongoing renovations, the puppeteers are looking to purchase new video and sound equipment and build a control room for recording and editing. The fundraising campaign began with a twelve-hour marathon of puppet performances in Berkeley earlier this month.

Soon, the PuppetPLEX will begin hosting “open puppet play days,” which will give the public the opportunity to participate in workshops and puppet-making events with members of the collective, Youtt said. Eventually, the group will also launch PuppetPLEX Presents, a series of puppetry performances at venues throughout the Bay Area.

Another goal of the collective is to help working puppeteers in the Bay Area get more gigs, said Toni Mikulka, who founded the performance company Giant Puppets Save the World and is a member of PuppetPLEX. “When you form a collective … you have a greater reach and the impact is a lot stronger.”

The complex will also enable collaboration and give local puppeteers a chance to work on bigger projects, like flash mobs and other public performances, said Mikulka, who is the managing director at the Habitot Children’s Museum in Berkeley. “The more hands we have working on one thing, the more amazing it will be.”

Dennis Eustace, an Oakland-based puppeteer and prop-maker who is currently producing a children’s series called Teddy the Traveler, said there’s a lack of space for these kinds of puppet projects in the Bay Area. “It’s really expensive here,” said Eustace, who is also a founding member of PuppetPLEX. “PuppetPLEX will open up a lot of doors for people.”

While PuppetPLEX is recent, its facility is not new to puppetry. Since 2004, the North Oakland studio has housed various puppet groups and artists, which is partly why the warehouse is now overflowing with supplies. The PuppetPLEX has close ties with the Oakland-based Big Tadoo Puppet Crew, a group that Youtt cofounded twelve years ago. Nash has performed with the crew for about five years. That troupe has its roots in social justice; it was formed in 2002 to protest the Drug Enforcement Administration’s efforts to criminalize hemp seed- and oil-based products. The puppeteers/activists traveled across the state performing skits that raised awareness about the issue.

Since then, the group has focused primarily on youth education, or “edu-tainment” as the puppeteers call it, performing in schools throughout the Bay Area. In recent years, these performances, which often combine puppetry and hip-hop, have focused on promoting walking, biking, and public transportation as part of a national campaign called Safe Routes to Schools. For years, the crew received grant money from Alameda County through the public-transportation advocacy group TransForm, but Big Tadoo lost this support in 2012 when voters failed to pass a countywide transportation tax. More recently, the group has focused on food justice issues and has received some financial support from a sustainability advocacy group called Common Vision.

The loss of county funding was one of the motivating factors behind starting PuppetPLEX. Youtt and Nash plan to use their new equipment to produce high-quality digital versions of their school-based performances, with the goal of increasing access to their work. “When we lost the contract … instead of dwelling on it, we said, you know what, we need to go bigger,” said Youtt. “We want to get out there to larger audiences, and like it or not, video on the web is the way kids spend their time.”

One of PuppetPLEX’s initiatives will be an ongoing production of digital programming for children, in the vein of Schoolhouse Rock. Students respond to puppetry, Youtt said: “They are interested in dynamic characters.” Plus, he said, puppetry has a long history of giving voice to oppressed groups, dating back to ancient Greece when most other art forms were banned under Turkish rule. “Puppets can say and do anything and are more free to speak their minds than humans doing theater.”

In addition to these efforts, the founding members of PuppetPLEX hope to preserve an art form that brings them joy. “It helps you to be able to transform your inner child,” said Nash. “And it’s a good way to release everything that’s been repressed. You can put emotion into that sock puppet.”