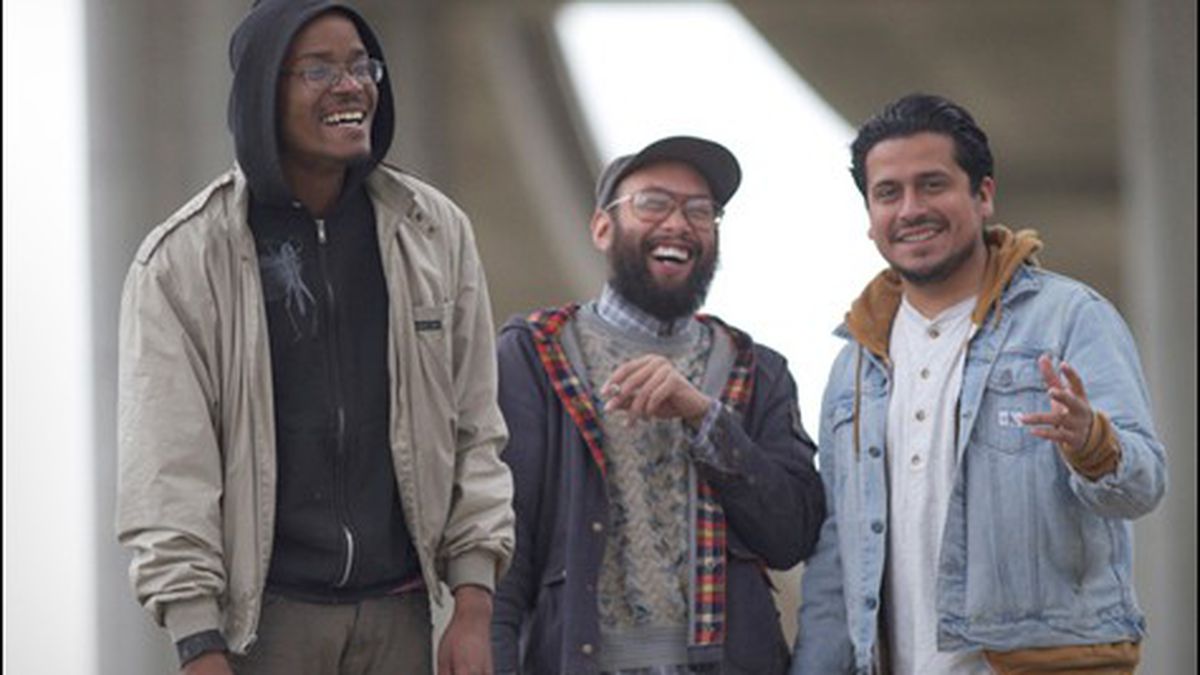 Oakland's latest generation of movers and shakers wants to help create a cohesive hip-hop scene — and have a party in the process.

It’s past midnight on a Wednesday and Mike Melero is just getting started: Standing in an alcove-turned-control room that’s roughly the size of most bathrooms, he’s fiddling with knobs, drinking a Cobra, shooting the shit with the other dudes who are also crammed into the tiny space, and, of course, obsessively checking Twitter — all part of a weekly podcast he runs with a loose collection of Oakland-based DJs, producers, promoters, and musicians called Trill Team 6.

Actually, “podcast” might not be the right term: It’s more like a party, one that just happens to be broadcast on the Internet via a beat-up laptop — as Melero would tweet the following day, “I hope tj\he east bay express people left my house before I blacked out and started a knife fite. #trillteam6.” (We did, sadly.) Elsewhere in the smallish, sparsely decorated, fluorescent-lit, West Oakland space Melero shares with a couple of friends, there’s a stack of bikes leaning against a wall; a dozen or so empty beer bottles piled in a corner; a lone, unpeeled onion resting dolefully on the floor. It smells unmistakably like weed.

Believe it or not, this tableau may be about as close a thing that there is to the Oakland hip-hop scene’s version of a power meeting, and these guys are its locus of influence: between the people in the room and the rest of Melero’s ever-expanding group of collaborators and friends — some of whom fall into Trill Team 6; others of whom are involved with Melero’s regular, roving party, Sick Sad World; still others who are just friends — there’s a surprisingly large amount of sway. Collectively, they know everyone (including, full disclosure, my boyfriend, who is a friend and occasional collaborator of Melero’s), are everywhere, and are somehow involved with everything. They throw multiple shows a week and attend even more, and boast a vast ecosystem of associated acts, including Elephant and Castle, Yalls, SAFE, Uncle Ricky, Religious Girls, R&B Millionaires, and Twin Steps. And though it’s a diverse group in every sense of the word, pretty much all of them share a few important characteristics: They’ve got polyglot tastes; prodigious Internet presences; and, perhaps most importantly, a seemingly indefatigable interest in partying. In a city that’s long lacked a cohesive hip-hop and dance scene, and an era in which the world of entertainment is increasingly fractured, something in Oakland seems to be crystallizing, and it’s largely because of Melero and his friends — even if they didn’t necessarily set out to make it that way.

“I don’t think we were ever really trying to influence a lot of people’s tastes,” Melero said a few days after the podcast over drinks at Radio, where he hosts a monthly DJ night — the aptly titled BOoze WaZi — under the name Bobby Peru. Raised in Gilroy and San Jose, Melero is slight and super-friendly, with a big beard and a laconic, slang-filled speech pattern. He doesn’t have a day job and goes out every night in a typical week. “Honestly, I just love hearing my favorite jams hella loud. It’s, like, my favorite thing.”

“Yeah,” said Albert Luera, aka NETO187, Melero’s slightly quieter analogue, also a DJ and central member of Trill Team 6. “It’s really a very selfish thing of, like, I wanna hear that song or see that band.” That’s a big part of why they decided, along with fellow DJs GuMMyBeAR and Spaceghost, to start hosting Sick Sad World. Though major venues like The Fox Theater attract big-name acts, many clubs and warehouses book garage and metal, and there’s still a decent number of clubs showing mainstream and hip-hop, Luera and Melero long struggled to find places to play or see the kind of music they like — a specific, eclectic, hyperactive blend of hip-hop, pop, indie, electro, and R&B. “We felt like there’s a lot of interesting music coming out right now, and there’s this music scene,” Luera said, “but we didn’t know of any parties or venues attached to it.” Sick Sad World began as little more than a residency at Merchant’s Saloon, but has since grown to attract hundreds of people to various West Oakland warehouses whenever it happens, and for good reason. It’s a sweaty, sloppy Adderall high of a live event, spanning a broad swath of the musical spectrum: Melero’s a big fan of ambient and electro, Luera’s into straight-ahead hip-hop, Trill Team 6-er Gabe Santos (aka Pony Loco) has a serious soft spot for cumbia, and seemingly everyone shares a love of Nineties R&B —you’d be hard-pressed to find an iteration that doesn’t invoke “Ignition (Remix)” at least once or twice. Tables are danced on, clothing taken off, bottles passed around, and from the vantage point of the dance floor it’s easy to see why all this works so well: These guys have elevated having a good time to a para-professional pursuit, and they are insanely good at it.

Of course, it’s a bit more complicated than that, and it helps that they got in at the right moment, and in the right place. As many members of the creative class continue to be priced out of San Francisco, and as warehouse culture continues to thrive, Oakland is fertile ground for a diverse, DIY-oriented music scene like the one these guys are creating: As Luera explained, it’s hard not to meet people when every other house on your block is throwing regular shows, and cross-pollination is natural when, say, there’s a noise act playing next door, a heavy metal show a few houses over, and a hip-hop set going down across the street.

For example, he said, take a recent show: “There’s SAFE” — Chris Edley and Jesse Hadden’s garage-R&B project — “and then there’s Twin Steps, which is like surf-punk, and then there’s this gangsta-rap dude. They wouldn’t book that at The Knockout.”

The Internet, too, has enabled them greatly, allowing low-budget operations like theirs to get their parties out better and easier than their forebears (the reason they promote so aggressively online, Luera explained, is that they can’t afford to print paper fliers).

And, of course, it also doesn’t hurt that Melero and Luera are gifted DJs and even more gifted showmen, both of them possessing that rare combination of a musician’s inward-focusedness and obsession with sonic details, and a promoter’s natural extroversion. It’s certainly smart to have your hands in every pot, acting both as promoter and talent, but even non-DJs are carving out a niche. “There’s basically all kinds of people throwing shows right now, and they’re all friends,” said Marshall Brooks, who — while not explicitly affiliated with Sick Sad World or Trill Team 6 — has been throwing shows on his own and with Luera and Melero under the name Pretty Blue Presents. “At this point, it’s, like, we all know each other, and we’re all helping each other out.”

They attend each other’s shows, book the same several acts over and over again, and generally support the community, if in an ineffable, ever-evolving way. Explained Melero, “We’re trying to build this solid group of acts, this solid community of people who come out here to have fun and keep it positive, whatever — keep it based.”

Eventually, they’d like to see the scene coalesce even more, he said. But for the time being, they’re just happy that they’re recognizable enough to get into parties for free.