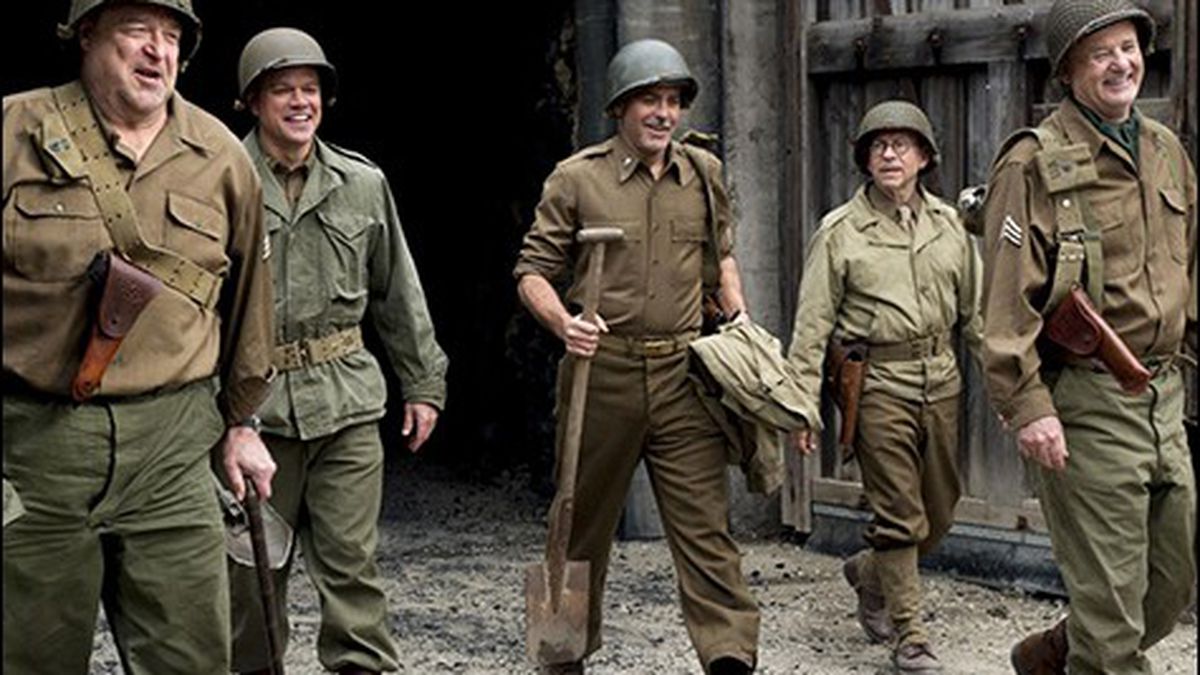 Europe in the late stages of World War II. What a mess. Along with millions of deaths and the wholesale destruction of homes and infrastructure, the Hitler regime is also responsible for looting some five million pieces of art from museums and private collections (the property of doomed Jews), ostensibly for a planned Führermuseum but also as swag to decorate the homes of Nazi leaders. The Allies decide something must be done to rescue centuries’ worth of Western cultural heritage from such barbarism, and so a special US Army unit of art scholars, most of them middle-aged and out of shape, is recruited to go to Europe and save the masterpieces.

Seven experts in uniform — played by George Clooney, Matt Damon, Bill Murray, John Goodman, Bob Balaban, Jean Dujardin, and Hugh Bonneville — are aided by a secretary (Cate Blanchett) at Paris’ Jeu de Paume, a sympathetic Frenchman (Serge Hazanavicius), and a German-speaking GI (Dimitri Leonidas). An army of ten, but if we fudge the numbers we could call them the Dainty Dozen. Together they track down stolen paintings and statues hidden in salt mines and Bavarian castles, and outsmart the Master Race.

The movie — directed by Clooney from a screenplay he wrote with Grant Heslov, based on a book by Robert M. Edsel and Bret Witter — is mildly entertaining when it should have the flavor of outrage. Spoiler alert: We win the war. The scenario could really use a female comic foil to play off against the scholars, à la Barbara Stanwyck in Ball of Fire — but Blanchett’s Claire Simone is far too dour for the job. At any rate the subject matter is probably too grim for laughs, despite Murray’s wry clowning. We learn just enough to pique our interest and take us to the tidy ending, and not much more. For the true lowdown on the real-life Monuments Men and their mission, dig up Richard Berge, Bonni Cohen, and Nicole Newnham’s very good 2006 documentary The Rape of Europa. Beside it, Clooney’s combatants look more like escapees from Hogan’s Heroes.