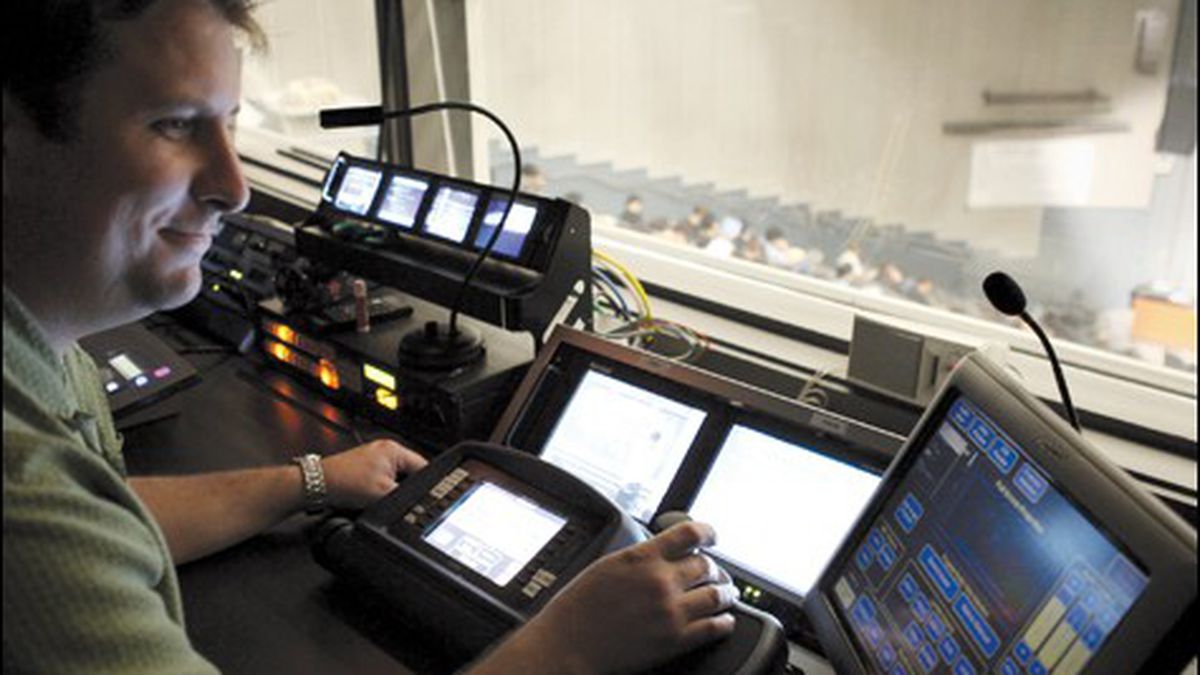 Webcasts and podcasts of classes have proven unbelievably popular at UC Berkeley. But is this good or bad?

Michelle Bitten isn’t a morning person, which made it hard for her to get to her 8 a.m. biology class at UC Berkeley three times a week. And when she did attend, she felt that the instructor tended to lecture at her rather than to her. “I didn’t even feel like I was part of the class,” she said. However, because the lectures were posted online she was able to attend and pass the class on her own terms. And when she watched the lectures online she found that she liked it better. “I could pause it to copy what was written on the chalkboard, or rewind and listen to a certain part again if I missed something.”

She’s not alone. “The professor announced that the lecture was going to be webcast and about half the class didn’t show up,” recalled student James Nagy about a class he took. “It’s more noticeable when midterms come around and all of a sudden there is a full classroom,” said student Michael Enciso. One student said that some of his peers will wait for the last three days before a midterm and just listen to thirteen lectures straight.

In the last ten years, webcasting and podcasting of lectures and campus events at Berkeley have exploded. From 2001 to 2010, such digital programming has been viewed or downloaded more than 100 million times. People all over the world use the service, which is free. But Cal students also have discovered that it offers the opportunity to miss class, since lectures are posted a few hours later.

While the podcasts and webcasts might affect attendance, they have become a valuable campus resource. “We’ve heard from faculty that it changes the way students engage in the class,” said Ben Hubbard who manages Webcast.Berkeley.edu. “Before webcasts and podcasts, they might have been burying their heads in their notebooks, getting hand cramps and not necessarily engaging in class.”

Hubbard says listening to podcasts at home also reinforces what was learned in the classroom. Web-based learning is invaluable to students with language barriers and physical disabilities. Finally, digital programming of this type fulfills the mission of a public university to educate the greater public.

The webcasts and podcasts have attracted a vast following outside of the student body. Since 2001, the university has logged more than 78 million streams from its Webcast.Berkeley site, 13 million downloads from iTunes U, and 9 million hits from YouTube, Hubbard said. Outside of the United States, the largest audiences are in China, India, and Russia.

The university has tapped into an audience eager to listen to well-crafted lesson plans from some of the best professors in the world. The Webcast.Berkeley office keeps a collection of e-mails that professors have received from people world over who have expressed their appreciation. They affectionately call the collection “Love Letters.” Excerpts from the collection are a testament to the reach of the podcasts.

“Phil Neibert: You, prof. Laquer and prof. Hesse are evidence why UC Berkeley is a great University. I am truly enjoying your European Civilization lectures on webcast. Your pace and clarity are excellent and your passion about the subject shines through. There is a great hunger for knowledge in the world and for those of us who will never be able to afford your wonderful institution, your lectures and others through the webcast is nothing short of a miracle. I can’t wait for your next lecture on Absolutism to become available.”

“I’ve enjoyed watching your lectures via webcast so much that I’ve decided to buy your book ‘Practicing Democracy.’ Your lectures are masterful… you use humor, you infuse it with anecdotes and biography, but most importantly, it’s enjoyable. I really wish I could’ve been there to take your spring 2006 course on Germany. I wonder how you would’ve described Bismarck, someone I found really interesting. I hope Berkeley will decide to record and broadcast your other courses.”

Economic geography professor Richard Walker has received dozens of letters from listeners, who range from civil servants to students. His favorite letter came from a woman who listened to his lectures while riding her bike across China. “It certainly is stimulating for me to know that many more people are listening,” Walker said. “I, like most professors, put a lot of hours into course preparation, so it’s good to know that it serves a bigger audience.”

Of course, Berkeley isn’t the only university podcasting. The site OpenCulture.com lists dozens of universities across the country, from American University to Yale, which have begun to upload lectures. Stanford‘s iTunes U site offers 74 courses to the public and currently maintains a one million per month download rate. The school’s course on iPhone application programming recently set the university’s record for quickest course to reach one million downloads, according to Brent Izutsu, project manager at Stanford’s Office of Public Affairs.

The origin of such webcasts at Cal goes back to 1995, when Berkeley computer scientist instructor Larry Rowe started videotaping his lectures for his students and posting them online. He wrote scripts that allowed video cameras to start recording at the beginning of the lectures and stop at the end. The lectures were automatically transferred to a file server that was available for streaming. It became a hit with the students and other professors started asking if he could support their classes with the same technology.

“I think he realized at some point that this was going to get bigger,” Hubbard said. Because Rowe wanted to focus his energy on teaching, in 2001 he passed the task of capturing lectures on to university’s Information Systems and Technology office and rebranded it Webcasts.Berkeley. Today, the office delivers 42 courses and has plans to expand the service to around 70 courses.

Most of the courses in the office’s catalog are podcasted, which means they are strictly audio recordings. Webcasted courses are video recordings accompanied by shots of the blackboard and PowerPoint slides. The webcasts blur the line between mere online supplement and outright online classes because communication between students and teachers is often limited to e-mail.

“We started looking at webcasts and started asking the question, ‘Is this effective and is it helpful,'” said Do Quyen Tran-Taylor of the UC office of the president. “What we’re learning right now is that currently students are finding the webcasts helpful as a supplemental tool to their regular courses.”

Tran-Taylor works with a committee putting together a pilot program of thirty to forty online classes for UC campuses throughout the state. Known as the UC Commission on the Future, the project released an initial report in March that suggested the removal of geographic barriers could reduce the time it takes for a student to get their degree. Tran-Taylor said that if the pilot program is successful, universities might use intercampus courses throughout the UC system. For example, a Berkeley student would be able to take a course from the UC Riverside campus, and vice versa. “Online courses may be offered more cost-effectively than on-the-ground courses in selected areas, and with no evident impact on the learning outcomes measured in research studies conducted thus far,” the report said.

“If you have a 500-person class and you’re going to use the lecture method then there isn’t really much of a difference from watching it online and coming to class,” said Mary Runnels, an educational psychology professor at Texas Tech. “There’s no interaction in class so it’s actually better for the student because they can go over it and they can replay it.” However, Runnels emphasized, smaller classes can’t be easily replaced with an online course because it is difficult to capture the interaction between the students and teachers.

When teachers use groups and social interaction to facilitate learning, Runnels said, students actively use the information and retain it better. Lecturing by itself can be an inadequate form of teaching. “In lecture classes, even if they go to every class, they can sit there and use their iPhone to do whatever they want to do,” Runnels said. “They might as well not come to class.”

Hubbard doesn’t believe that the webcasts have a substantial effect on attendance. “We podcast maybe 4 or 5 percent of the total course catalog and there’s just no way that attendance is isolated to the classes that are being podcast,” Hubbard said. “The students that are going to skip were going to skip anyway and get notes from a friend.”

The University of Delaware tested an initiative that allowed students to access video recordings of their professor’s lectures. Preliminary findings there showed that 75 percent of the students accessed the lectures with no significant impact on classroom attendance. Like video recordings, podcasts are a one-way medium, said Chrystalla Mouza, a University of Delaware professor who specializes in educational technology. “Podcasts are meant to serve the needs of a student population who has grown up in a media-rich environment, and expects more flexible and portable course delivery options,” she said.

Walker notes that the trade-off for possible reductions in attendance is that students who have to miss lectures for a good reason can now keep up with the rest of the class. However, Walker said he is careful not to provide PowerPoint slides online for his students. “The one time I did that, attendance really did fall — the little rascals.”

Consequently, Walker hopes the trend toward more online-oriented classes doesn’t go any further at Cal. “The lecture hall is still a vital part of the college experience, both because of its human immediacy and its social form,” he said. “What Americans do not need is more isolation and individualization. Furthermore, the gathering together of young people on campuses is essential to their life experiences and learning beyond the classrooms.”

As for late-riser Michelle Bitten, she switched majors from pre-med to anthropology. She believes that using the webcasts was the perfect solution for her former classes, but now discussion is extremely important in every class. “Now I love going to class,” Bitten said. “None of them are even offered as a webcast.”