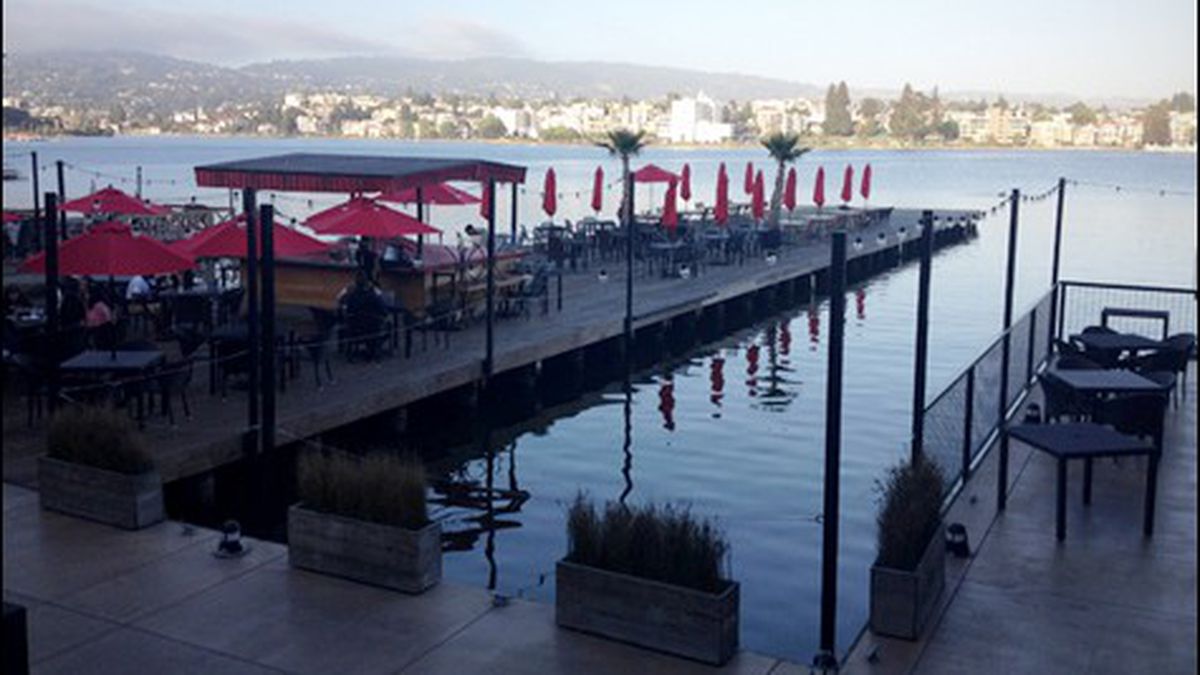 The Lake Chalet and the Life Coach

Lessons of all kinds at the Oakland establishment.

I met Carrie my freshman year of college, over a miserable dinner: Our dorm had gone out for a meal, and the place had gotten my order colossally wrong — I don’t remember the details, but this was during my (ill-advised) vegetarian phase and they’d given me something meaty. I sat there, attempting to pick around the tiny bits of bacon or chicken or anchovies or whatever it was that flecked my pasta — paralyzed by passivity, not wanting to make a scene, scared and friendless and eighteen in a big city, the bacon/chicken/anchovies feeling like some kind of terrible metaphor. She saw me excavating my dish, swooped in like a big sister, asked what was wrong, had a sweet-but-firm conversation with our waitress, and within minutes I had a new plate of bacon/chicken/anchovy-less whatever in front of me. NorCal nonconfrontation met New York City bluntness and the rest was, as they say, history. In the several years since, on both coasts and abroad, in nice restaurants and shitty dive bars, Carrie has always acted as something of a life coach, scolding me when I’m too shy to ask for so much as a napkin, sending my drinks back for me when they’re poorly mixed or just patently not what I ordered, requesting — always kindly, never rudely, and less out of pickiness or snootiness or cheapness than out of a sort of wonderful idealism, a belief that eating and drinking experiences should always live up to their potential, whatever they may be, and that not asking for what you want is the surest way to be disappointed in a place for not giving it to you — extra lemon or more water or another fork after one falls on the ground. She is one of my favorite people in the universe.

“Cape Cod vibe, but with Bay people,” is how Carrie quickly and aptly described Lake Chalet when I took her there last week during one of her frequent visits from New York; this statement, coming from her, is a very, very good thing. Inside, it’s all hotel-lobby chic and expensive light fixtures, the site of a million business lunches and wedding receptions. Outside, though, it’s a little less fussy-feeling, with red-tented tables, wooden decks jutting out into the lake, a canvas-roofed shack of a bar overlooking everything, a soundtrack that’s heavy on radio pop rather than classical and jazz: like a country club, except with better people and Lake Merritt your (unswimmable) pool. Happy hour is gloriously long — 3 to 6 p.m. and then from 9 p.m. to close, every day — and drink prices are still pretty reasonable at all hours of the day. All told, it is, aesthetically speaking, an incredibly appealing setup for a late-afternoon/early-evening cocktail, when the sky’s darkening and the deck’s all spangled with string lights. Or at least that’s the idea.

We got there at around 7 on a Saturday, just in time for the aforementioned string lights and darkening sky, and sat near the end of the south pier. My In Bruges (hibiscus-infused gin, pineapple syrup, lemon, Belgian beer, $9) was much more pineapple- and lemon-y and much less berry than I’d hoped, an oddly balanced mix of cloying sweetness and cutting tartness that, in its defense, might’ve been just fine for someone with different tastes than me. The Bloody Mary, meanwhile, was low on Worcestershire and lemon and high on black pepper, making for a distinctly back-of-the-throat kind of spiciness — not an unpleasant taste once you get used to it, Carrie said diplomatically, but almost certainly not how it’s supposed to be. Service was similarly strange, everything some close approximation what slightly schmancy lakeside dining and drinking is supposed to be but never quite arriving there: We were only given one menu for three people, informed that they were out and asked to share — until Carrie politely pointed out a stack sitting unused a few feet away from us; were given two orders of fries after only ordering one, the first of which came piping hot with a nice-enough aioli and the other of which came room temperature with no sauce; were delivered a long-requested and nearly-forgotten wedge of lemon just as we were signing the check, fifteen or twenty minutes later.

A cynic would say at a place like this, it’d be naive to expect service and drinks to match up to the view — after all, why would they need to? — and it’s hard to, in good conscience, complain about anything when you’re sitting outside, drinking a cocktail and watching the sun set over a lake. But naivete and idealism aren’t quite the same thing, and NorCal nonconfrontation has its limits. It’s about potential.