.District: Come for the Cocktails, Stay for the Food

Among other things, the wine bar doubles as a nouveau French bistro. 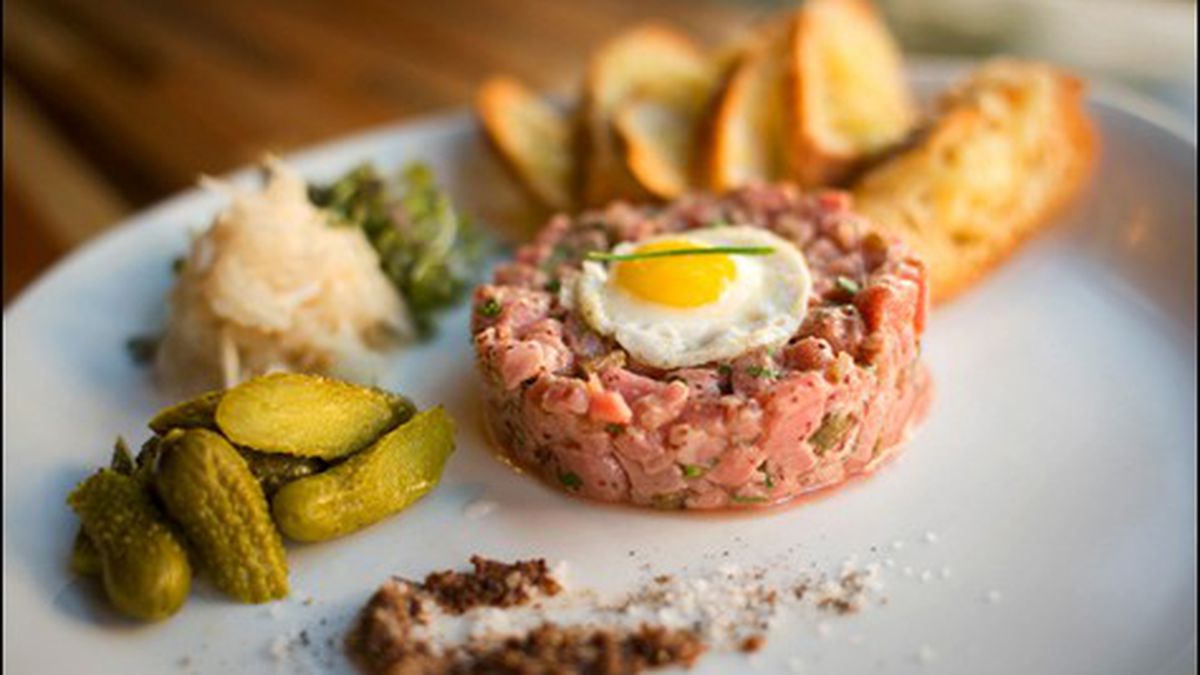 For a long time, it’s been de rigueur to say a place has good food for a bar — a backhanded compliment if I’ve ever heard one. But here in the Bay Area, that sentiment is losing meaning in the face of a new wave of upscale, food-focused drinking establishments that’ll wow you with their cocktails but can also whip up a mean pâté.

Nevertheless, at District, the Old Oakland outpost of a trendy San Francisco wine bar, first-time customers would be forgiven for not having high expectations for the food — it just doesn’t look the part. District is one of those cavernous, semi-industrial spaces that seem like they’ve been in fashion forever, and has all the usual accoutrements: chandelier-style light fixtures, bare pipes, exposed brick. Mounted on one wall is a huge TV — actually four flat-screens joined together as one — that plays old art movies or sports. Seating is divided into three main sections: big couches where large groups (or amorous couples) can sprawl out; high-top tables; and, the central feature of the room, a huge horseshoe-shape bar.

All of this is to say that the overall vibe at District is more sceney lounge than restaurant. And it’s true that the cocktails are one of the main attractions. (The Express’ Ellen Cushing already gave a thorough rundown of the wine- and whiskey-focused bar program; the only thing I’ll add is that the wines on tap — easily the best value — are decent enough, and poured generously.) But the food, too, is well worth seeking out.

One of the keys, of course, is the presence of a real chef. Bob Cina is the executive chef of the restaurant group that includes the two branches of District as well as SoMa’s Ironside, but lately he’s been spending most of his time cooking in Oakland. Cina has created a fairly extensive menu that includes snacky bar bites, house-made charcuterie, mini pizzas, and a selection of updated French bistro classics. Everything is well suited for sharing.

A great meal at District might start with a savory braised artichoke or an order of deviled eggs — an elegant, mustardy version garnished with a pickled radish round and a tiny radish sprout. Better yet, share a plate of the mix-and-match charcuterie, each option priced at $3 or $4 (or $24 for a sampler of everything). Needless to say, it’s impressive that a wine bar is smoking its own hams and making pâtés and rillettes from scratch, and, at $11, my three-item platter was a good deal. Granted, the beef bresaola — a kind of salami — was too salty to showcase the beef’s promised “grassy” quality. But the pork-and-duck rillettes made for an unctuous and satisfyingly meaty spread. And, best of all, the slightly boozy chicken-liver mousse had just the right amount of organ-y funk, balanced by the sweetness of an amber-hued port gelée topping — I practically licked the bowl clean. My only minor complaint was that the accompanying croutons were overly toasted, and proved to be inefficient vessels, since many had gaping holes.

As is often the case at wine bars, a lot of items on the menu at District blur the line between appetizer and entrée. But if you’re planning to order a full dinner — not just something to munch on with your drinks — consider one of Cina’s playful interpretations of traditional French dishes. For example, the hand-cut steak tartare might be the best in the city. The raw beef — from a lean eye of round steak — had been coarsely chopped and topped with a fried quail egg, which I cut into in order to let the runny yolk ooze into the meat. The result was beef with a pleasantly chewy texture and a mellow acidity (from the addition of violet mustard) — not the slimy mess that often passes for beef tartare. Cina serves this with an array of tasty condiments — sauerkraut, French cornichons, and such.

I don’t know how the French would feel about Cina’s distinctly non-traditional crispy escargots, which were batter-fried and served with a bright-tasting lemon-parsley cream sauce. But for those grossed out by the idea of eating snails, these are a good introduction, seeing as they more closely resemble fried clams than, well, slugs. The snail meat was cooked to tender-yet-toothsome perfection, and the accompanying mushroom salad was tainted only by the inclusion of grilled ham that, like the beef bresaola, was just too salty.

The fries, meanwhile, were fantastic — a classic version, with a true potato flavor and that ideal interplay of crisp exterior and fluffy interior. The dipping sauce, cut with crème fraîche, was surprisingly light for something labeled “truffled Parmesan aioli.”

Ultimately, not all of the food at District is as high-end as the fancy wine list might suggest, but the pricing is inconsistent enough that you need to be careful what you order. For $14, the portion of seared sea scallops was tiny — just five thin scallop halves (halved horizontally) — and also had way too much going on, especially with the inclusion of candied chili peppers that overpowered all of the other elements. And the oxtail “sombreros” ($7) came with only three small tortilla chips, each topped with a mound of tasty, but somewhat stringy, braised meat. Then again, dishes like the steak tartare or the charcuterie offered plenty of bang for your buck.

There’s a moral to this story somewhere — something to do with judging books by their covers, and how trendy “it” spots are as capable of surprising critics as divey holes-in-the-wall. It’s true that the whole setup at District is a bit self-consciously hip — but not obnoxiously so. During my early evening visits, the oomph-oomph of house music playing over the speakers was dialed down low enough that I never found it difficult to carry on a conversation, and the friendly black-clad servers and bartenders didn’t exhibit a smidge of attitude.

Of course, in the end, the food spoke for itself.