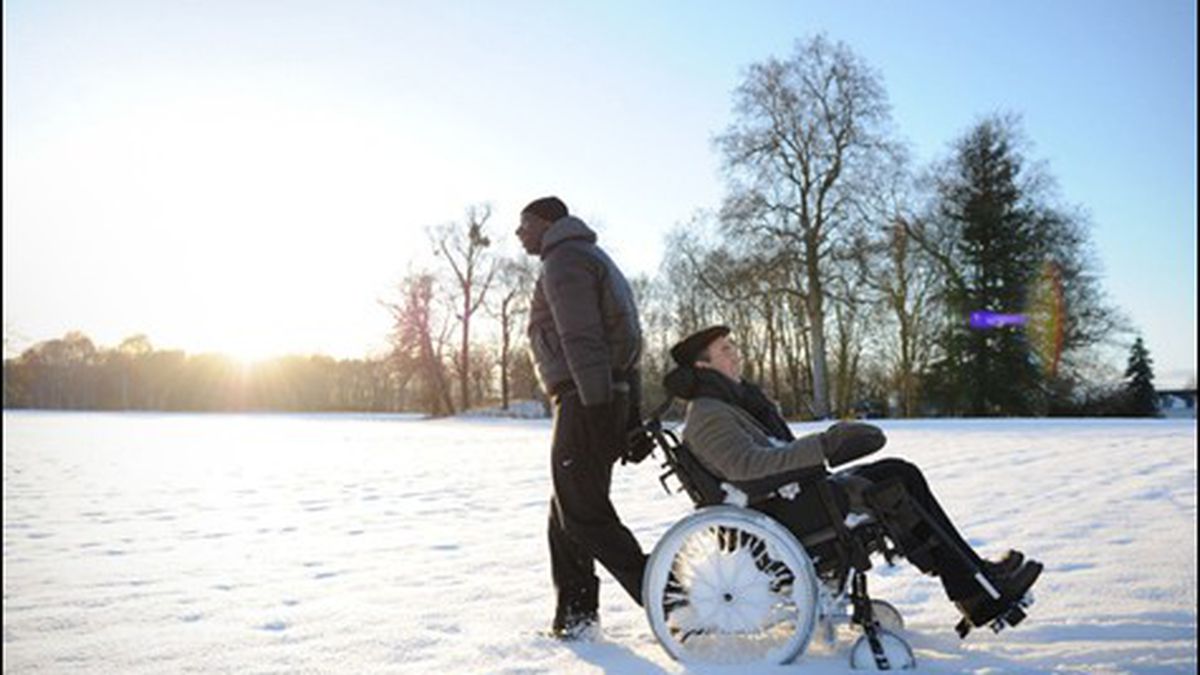 It’s easy to make a cynical diagram of Olivier Nakache and Eric Toledano’s The Intouchables: Take the basic premise of Driving Miss Daisy and move it to contemporary Paris. Change Miss Daisy into a rich, quadriplegic white man. Turn her faithful driver into a tough young African-immigrant ex-con from the housing projects. Voila! Instant schmaltz.

But that would mean throwing away the grace notes and character phrasing, the comic timing, the little touches that can’t be schematized, the things that give The Intouchables, predictable and corny as it might be, its zest. Never mind that the 2011 heart-tugger was a runaway smash hit in France — let’s appreciate it on its own terms.

Driss (played by Omar Sy), an athletic Senegalese native who hustles on the streets to support his extended family, shows up for the employment interview — personal assistant to a disabled man — with a chip on his shoulder, as if he doesn’t want the job. He’s in a hurry to have his application signed so he can show it to the welfare official as proof of effort. Something about his attitude impresses Philippe (François Cluzet), the patient in question. Fabulously wealthy Philippe hurt himself paragliding in the mountains and is now paralyzed from the neck down. The person who cares for him has to do everything from bathing and feeding him to driving him around. Once the reluctant Driss gets a load of his opulent new quarters in Philippe’s mansion, he figures he’ll string along for awhile and see what happens.

Of course, we already know what will happen. The Intouchables has taken a certain amount of flak over its use of the “magic negro” formula, with some justification. Driss, who thinks of himself as pragmatic, needs someone like Philippe to open him up to things like fine art (Driss tries his hand at action painting), European classical music (to Driss, “Berlioz” is the name of a housing block in the projects), and expensive suits. All he needs is a tiny break. Remember Eddie Murphy in Trading Places? Poor millionaire Philippe requires more work. His mind is sharp but his useless body inhibits him. He’s afraid to show himself to his female pen pal for fear of rejection. What better vicarious antidote for his shyness than street-smart Driss, who’s unfazed by Philippe’s snooty circle and doesn’t hesitate to beat up that guy who always parks in Philippe’s handicapped parking space? And what better cure for Philippe’s “phantom pains” than a little weed and a midnight city stroll? Beaucoup de physical humor.

Actor Cluzet (‘Round Midnight) is the ideal light leading man to portray Philippe, almost more of an ideal than a character. The true star of the show is Sy, a 34-year-old Frenchman who played a variety of comedic roles in things like Micmacs before landing this showboat of a part. He won a Best Actor César (the French Oscar) for it, beating out Jean Dujardin in The Artist.

Driss is so visibly wowed by his good luck that it naturally makes us beam along with him. He knows how to live and brings joy into Philippe’s lonely life. Awww. The story happens to be true, based on the real-life situation of Philippe Pozzo di Borgo and his caregiver Abdel Sellou. Filmmakers Nakache and Toledano fill in the stock types with precisely the right personalities and everything clicks. France is still wrestling with its racial politics, and The Intouchables is obviously a stepping-stone. In the best of all possible worlds, Driss might just as easily be the rich invalid, but in the meantime he’s the best friend money can buy.