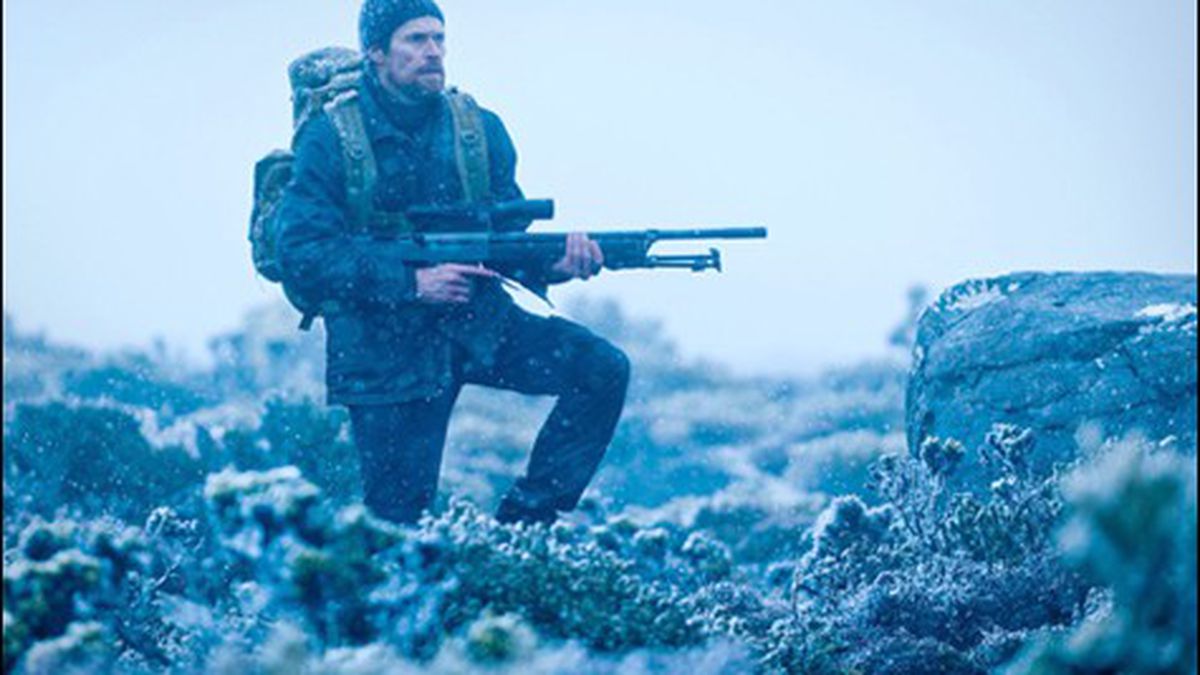 A mercenary named Martin David (Willem Dafoe) is sent by a mysterious international corporation to the backwoods of Tasmania to kill and harvest the organs of the extremely rare Tasmanian tiger. That’s the framework of director Daniel Nettheim’s satisfying outdoor adventure The Hunter — an environmentalist’s nightmare rigged out as a primal contest of wills.

As we go deeper into the story, we fail to learn much more about the “tiger” — a doglike carnivorous marsupial with an eerie striped back and tail — other than that there is only one left in the entire world, and that Red Leaf, the military biotech corp funding the hunt, wants to get its hands on the unique toxin the tiger uses to paralyze its prey. Martin has been instructed to shoot the animal and bring back bio-samples of its blood, hair, etc. So a shadowy military company wants to kill off the last of a species in order to learn how to efficiently kill off more human beings. Sounds perfectly logical.

The prey is pretty much a MacGuffin, something for the hunter to occupy himself with as we get to know him better. Martin flies into Hobart, capital of the Australian island of Tasmania, posing as a scientist. The hunt is being kept secret, and Martin communicates with his employer via laptop. In his backpack is a high-tech, lightweight sniper rifle. One of the obstacles Martin faces, besides the general surliness of the local good-old boys, the ruggedness of the terrain, and the implied viciousness of the tiger itself, is that he has to compete with rival hunters. Red Leaf can’t wait for the results, and thinks nothing of pitting killers against each other in a race for the prize. Martin is in a nasty situation.

Dafoe, defiantly lean and wiry at age 56, is the ideal actor for this sort of Manichean struggle of a lone man against the dog-eat-dog world. His filmography is studded with roles like Martin David’s, in which the star of Platoon, The Last Temptation of Christ, Spider-Man, and Antichrist can get out in the bush, setting traps, skinning wallabies, and wrestling with the duality of human nature at the same time that he’s ducking gunshots. Dafoe has one of the finest “implacable” faces in the business. When he’s preoccupied by something, better stay out of his way.

Martin’s slowly unfolding tale is directed by the Australian Nettheim from a screenplay by Alice Addison and Wain Fimeri, adapted from a novel by Julia Leigh. It leads him down a menacing trail peopled by characters who are not what they seem. Jack Mindy, the Tasmanian guide hired by Red Leaf to assist Martin (played by Sam Neill, Dafoe’s costar in 1996’s Victory), has an untrustworthy air about him. Martin’s host family on the island, the Armstrongs, is involved in the strife between loggers and “greenies” (enviros). The father went missing after a trip to the hills, his despondent wife Lucy (Frances O’Connor) has withdrawn into drugs, and only their two neglected kids, particularly the bright, inquisitive daughter Sass (Morgana Davies), interact with Martin with anything resembling real warmth. There’s danger everywhere he turns.

The Tasmanian scenery is magnificent, shot on location in Mount Wellington, the Central Plateau, and Florentine Valley. Martin gets snowed on and suffers the same sorts of mishaps seen onscreen in such wilderness actioners as The Grey, Hanna, Rare Exports, The Canyon, The Way Back, and Into the Wild. We’re in the middle of a field-and-stream boom. As usual in this sort of scenario, Martin’s fellow humans are much more worrisome than the wildlife. The only complaint is that the filmmakers don’t exactly know what to do with Martin once they’ve got him in the boondocks surrounded by predators. That usually indicates a major failing in a movie, and it does slow things down when most adventures would speed up. But Dafoe, the thinking person’s survivalist, casts his spell on the action. We end up keeping our eyes on him instead of on the perils popping up everywhere, and he brings the story through all by himself.

The Hunter is produced by the same team that made 2010’s superlative Melbourne crime yarn Animal Kingdom. The spectacular Oz settings, fleshed out by the dependable presence of Dafoe and Neill and a cast of ocker heavies, go a long way toward making up for the writing problems. Think of it as a popcorn movie topped with Vegemite.