The multi-use project, anchored by the Impact Hub, is focused on helping spur Oakland's local economy. 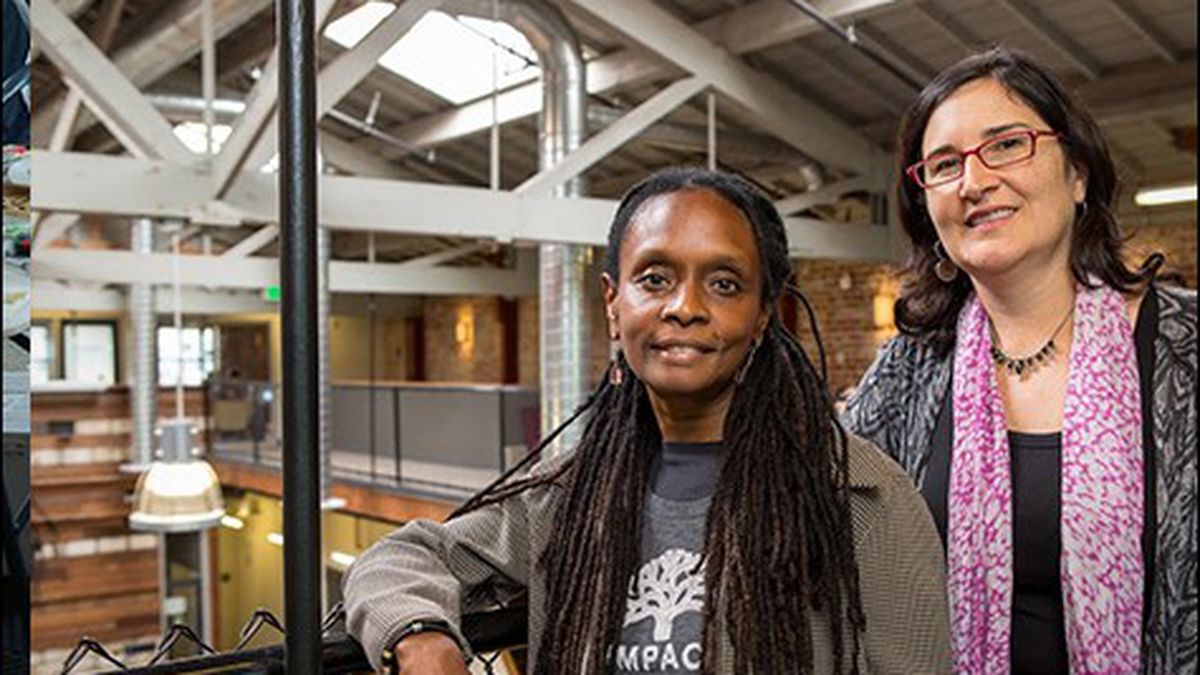 In early February, Signature Development Group welcomed its first tenant to the Hive, an office, retail, and housing development project on Broadway between 23rd and 24th streets, in the heart of Uptown. In more ways than one, the Hive signifies the resurgence of Oakland’s local economy. The project — which will span the entire length of the city block when it’s completed — includes the rehabilitation and renovation of former auto showrooms that have been vacant since 2006. But what will perhaps have an even greater impact on Oakland’s economy is that the specific aim of the project’s first tenant — which is also its anchor — is to foster economic growth and cross-collaboration between socially conscious entrepreneurs in the city.

That anchor is Impact Hub, a co-working community and small business incubator. The Oakland hub is part of a larger network of more than sixty co-working communities, the first of which was founded in London. The first US hub opened in the David Brower Center in Berkeley in 2008, and there is also one in San Francisco. According to Roe Cummings, community host at Impact Hub Oakland, the character of each hub is different because it reflects the priorities of the people who founded it and the culture of the city it was founded in. (Cummings previously worked at Impact Hub San Francisco.)

Konda Mason, CEO and co-founder and one of the three women who run day-to-day operations at Impact Hub Oakland, was explicit about the Hub’s top priority: “Our mandate is to create good jobs in Oakland.” She described the Hub as emblematic of “the new economy” — one in which many people need little more than their laptops and an internet connection to do their work, but crave being able to connect with other like-minded people.

Impact Hub took more than 16,000 square feet of The Hive project. On the first floor, which is spacious and flooded with natural light, large petal-shaped tables that can comfortably seat three or four people facilitate interaction among Hub members, of which there are currently more than four hundred. On the second floor, there are 21 offices that have been leased by businesses that share what Mason describes as a belief in “planet, people, and profits” (in that order). Plans to build a 5,000-square-foot makerspace in the basement are underway. In addition to space for members to work, relax, meditate, and hold meetings, the Hub also offers classes and workshops on business development, personal development, leadership, and innovation.

The goal, Mason said, is for members to become so successful that they are able to branch out from the hub and open their own businesses locally elsewhere. As to whether the Hub is reflective of Oakland, Mason was emphatic. “We are absolutely Oakland,” she said. “We are a diverse group and mainly women-led, and the space feels like that.”

When the Hive is completed, it will include 100,000 square feet of commercial space — nearly all of which has already been leased — and 104 residential units. The dozen or so car dealerships on Broadway used to be one of Oakland’s largest sources of sales tax revenue, but for years now, Auto Row has steadily been fading. “From a purely economic standpoint, a property that has been vacant for eight to ten years isn’t generating any revenue for a city,” said Paul Nieto, senior vice president at Signature. The tax revenue generated from the Hive, he added, “will be fairly substantial.

“But, in particular, I’d say that the Hub is going to have an influence on Oakland’s local economy because it is trying to incubate businesses that will rise the tide of Oakland residents,” he continued. According to Jamie Choy, project manager for the Hive at Signature, the commercial portion of the project should be finished by the end of year, with residential development to be completed by the end of 2015.

Future tenants who have signed on to become part of the Hive are interested in benefiting from the same kind of peer cross-pollination the Hub wants to facilitate for its members. In May, Numi Organic Teas became the second tenant to move into the Hive. (Numi’s headquarters were formerly in East Oakland.) When Mike Ghielmetti, president of Signature Development Group, showed Numi co-founder Ahmed Rahim the building he owned on Broadway in Uptown for the first time, Rahim was struck with a vision. At the time, Ghielmetti only owned the one building, but Rahim saw that the entire block of red brick buildings with high ceilings was vacant, and ripe with potential. “I told him I was interested [in the space] if we could try to bring together a bunch of other social, sustainable business leaders to create intentional community,” Rahim said. “I’m a big believer in creating change through collaboration.”

Mason of Impact Hub heard about the Hive from Rahim, who is a partner of Impact Hub Oakland. Rahim then sought out Chris Pastena, the restaurateur behind Chop Bar, Lungomare, and Tribune Tavern, to see if he was interested in joining them. “Being neighbors with Konda and Ahmed was something that immediately interested me,” Pastena said. “The location is phenomenal, and has historic value, but beyond that, we all share common values. We want to work together, we’re a group of people trying to make change and do great things.” Pastena will open Calavera, a Mexican restaurant with a tequila and mescal bar that will be open for breakfast, lunch, and dinner seven days a week, later this year in the Hive. A corridor being built within the Hive will feature outdoor seating and a promenade.

Other future tenants of the Hive all have roots in the East Bay’s local economy. They include Drake’s Brewing Company, which is building a brewpub; Red Bay Coffee, an artisan coffee roaster; Truve Fitness, a personal training and wellness center; and Balfour Beatty Construction. The founder of Red Bay Coffee became a member of Impact Hub when it first opened a pop-up on 14th and Broadway last fall. He said the hub was instrumental in helping him convince Signature to take him on as a tenant.

In the case of Truve Fitness, giving back to the local economy is a fundamental part of founder Alison Roessler’s belief system. She is requiring all forty or so practitioners she has hired to teach fitness and wellness classes at Truve to commit to donating an hour a week to community service, whether that’s by teaching free classes or donation-based classes (in which the instructor donates the profits) or by volunteering with a group of his or her choice.

“I personally believe that everyone deserves the same access to health and wellness, to the services that we offer. I didn’t want it to become a place where only the wealthy go,” she said. “I tell them, ‘Someone who cannot afford your services might tell five other people about you who can.'” Truve Fitness won’t open until later this year, but Roessler said that the practitioners she has hired are already doing their hours.