BART Board to Vote on Altering Bike Access on New Trains

BART is moving forward with efforts to redesign its train cars, part of its so-called “Fleet of the Future.” Recently, the transit agency gave the public the chance to view models of the new cars in-person, and give feedback on the design, color scheme, seat comfort, and other features. One aspect that has attracted significant interest is the bike racks — and this week, BART’s board of directors will consider whether the design needs to be altered. Cycling advocates are urging the board not to adopt any design that would reduce bike access.

The current proposal is to have one bike rack — which has slots for up to three bikes — stationed in each car. According to BART, it will look something like this:

In another bike-rack rendering by BART, the agency removed the adjacent flip seats due to commuters’ concerns about how they would interact with the racks: 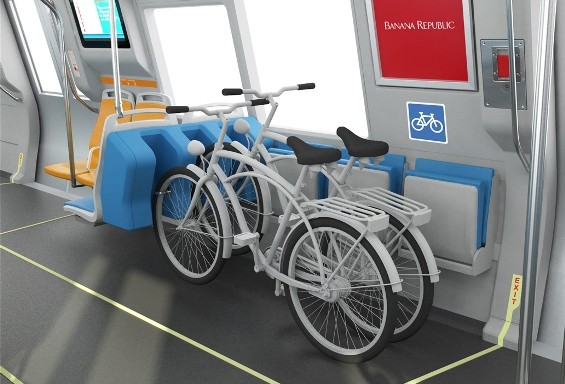 Based on the agency’s summary of public feedback, it appears that the bike rack was one of the more controversial components of the new cars, which is why the board is reviewing alternative designs at a meeting on Thursday. BART writes: “The new bike rack elicited a range of comments — from ‘does not provide enough dedicated space for bicycles’ to ‘provides too much dedicated space for bicycles.’ BART’s Board of Directors will be considering various alternatives for the poles and bike racks to meet the diverse needs of our customers.”

Here are possible changes to the bike layout from the agency’s upcoming June 12 presentation (cab cars refer to those that have an operator’s cab; they make up 40 percent of the fleet):

And here is the agency’s analysis of the three options (click on image for larger version):

In other words, fewer bike racks means more seats. On Thursday, the board of directors will hear a presentation on public feedback and also vote on design choices for the bike racks and floor-to-ceiling poles (which have also sparked some debate). Regarding bike racks, BART is recommending the board stick with the current design (option A), arguing in its presentation that it “provides space on every car for bicyclists to park their bike in an out-of-the-way location” and “helps keep bikes from blocking seats, aisles, and doorways.”

The board’s vote will mark the end of the design phase, meaning the manufacturer will begin assembling pilot cars for testing within the BART system in 2015. General production would begin sometime after that, with more than one hundred new cars going into service every year beginning in 2017. You can read more about the board’s upcoming vote here, and view the agency’s full presentation here. And you can read about the survey results here and here. Here’s a snapshot of the feedback BART has received: 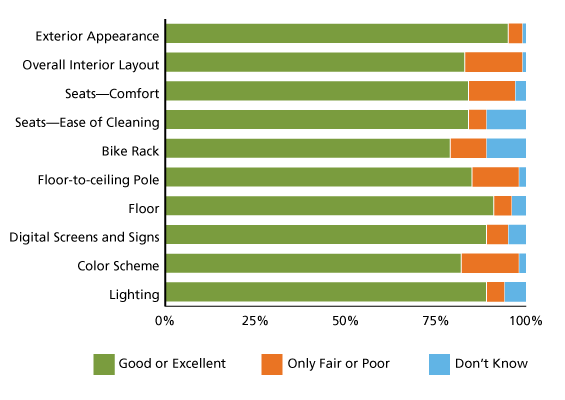