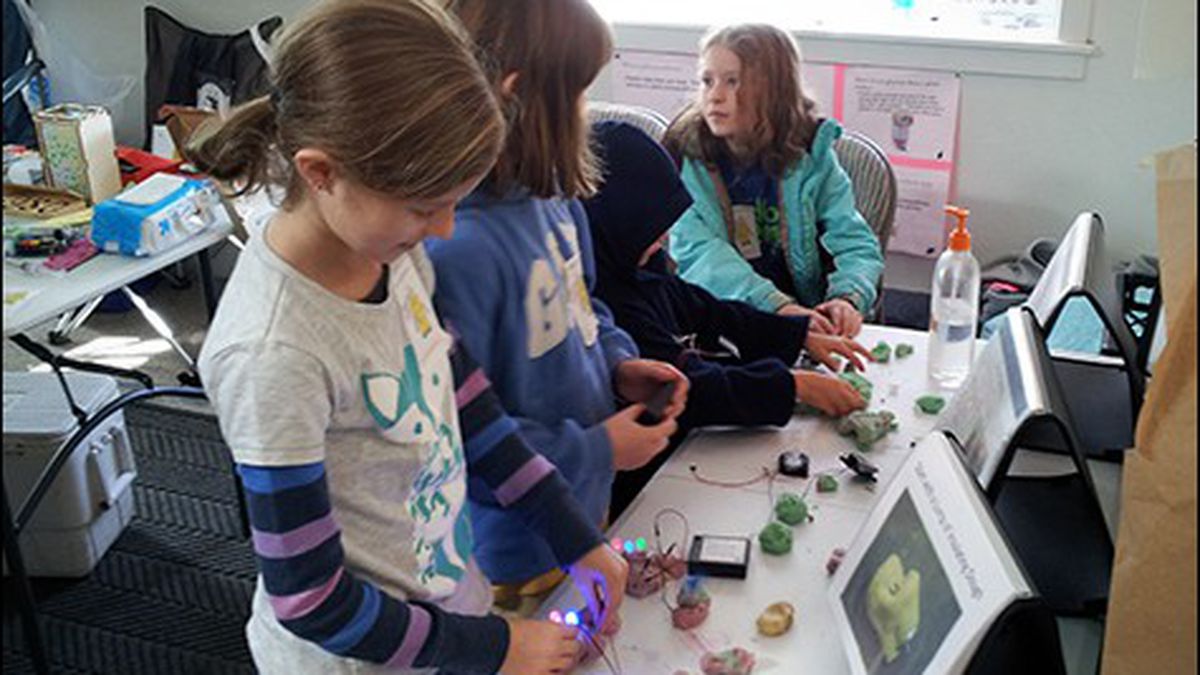 Hayward makers are designing a space for students, families, and young adults that will foster community and creativity, and boost the local economy at the same time.

For Carolyn Lunger, “hacking” isn’t about launching cyber attacks on corporate mainframes or pulling online pranks. It doesn’t even have to involve technology. Instead, Lunger views hacking as a way to modify an object — any object — to make it work better. And for her, that object could be a neighborhood, or even a city.

“I look around and I see a lot of potential for Hayward,” she said. “But when I see kids who are not passionate about learning, it breaks my heart.”

Which is why Lunger and a group of educators, techies, and scientists are building Hayhackers, a new family-friendly makerspace in Hayward that aims to provide families and professionals a space to explore technology and science. In doing so, Hayhackers hopes to strengthen the community and offer children an alternative learning environment outside the classroom.

Hayhackers organizers plan to host workshops and teach children basic technical and creative skills, including soldering, 3D printing, and circuit building, as well as woodworking and welding. “Learning doesn’t just stop at the books — there’s more,” Lunger said. “Everything that has been made and created is because someone took it apart, studied it, figured it out why and how it worked, and I want kids to appreciate that.”

Lunger pointed out that Hayward has one of the lowest performing school districts in Alameda County. In 2013, the Hayward Unified School District turned in an API of 721, well below California’s standard of 800. Lunger thinks this is largely due to a lack of engaging curricula and community support for the area’s underprivileged youth. As a mother of eight children, Lunger knows how difficult it can be to support a child’s academic life while struggling against financial pressure.

“A lot of parents are struggling to make ends meet,” she said. “They’re gone working all day, and then having to help with homework at the end of the day … it’s hard.”

Although Hayhackers hasn’t yet found a permanent space, the group has visited elementary schools throughout the East Bay, showing educators how the so-called “maker movement” can complement — even improve — childhood education. At the Bay Area’s most recent Maker Faire, Hayhackers hosted a workshop on how Play-Doh can create a simple circuit, which taught children some basic, yet crucial, tenets of electrical engineering.

But Hayhackers isn’t the only group exploring more hands-on approaches to education. Throughout the East Bay, a growing number of schools and makerspaces have been collaborating on programs dedicated to applied learning techniques, which aren’t common in standard curricula.

Danny Beesley, a digital fabrication consultant working to connect a number of schools and makerspaces throughout the region, explained that more self-directed and hands-on learning could empower underprivileged youth and students struggling academically. “It’s not about printing widgets,” he said. “It’s about them becoming an active participant in creating their world.”

Beesley further explained that more collaboration between makerspaces and local schools could be a step forward for local economies. “All the skill sets in makerspaces, hackerspaces, and fab labs are the training wheels for a new economy,” he said.

Yet Hayward has relatively few makerspaces compared to other parts of the Bay Area, which Lunger believes is due, in part, to a thin sense of community — both among individual members and the city’s academic institutions. “We may have Hayward State [Cal State East Bay], we may have Chabot [College], but it’s almost as if [Hayward] is for commuters,” she said. “They come in and rush out … back to Oakland or wherever they came from.”

Lunger said she’s especially focused on South Hayward, which includes some of the poorest neighborhoods in the city. “It wasn’t the best environment,” explained Hayhackers organizer Tammy Villalobos, 18, who was raised in South Hayward. “Growing up, I wasn’t taught I was gonna do something in life, and I was nothing but a failure and worthless.”

Villalobos said that, looking back, she wishes there were more programs like Hayhackers to provide her and others her age with more opportunities to succeed academically. “If people would understand how this could change people’s lives, we would be a whole different community,” she said.

Yet, while Hayhackers strongly identifies as a family-oriented makerspace, it also hopes to include a separate space for adults to work on more complicated projects. “Basically, the other hackerspaces in the area are one or the other,” said co-organizer Cristina Deptula. “They’re either young singles or techies and software engineers or mothers with children. We wanted to have a place for everybody.”

But the group is still trying to decide how to create a space that accommodates both single adults and families with children. Lunger explained that this can be tricky, as some makerspaces in the Bay Area sustain a culture some parents might not deem child-friendly.

Nevertheless, the members of Hayhackers are determined to find a way. The group is raising donations on Indiegogo and hopes to select a space by the end of summer. For now, the group hosts regular meetups and invites members of the community to contribute. “I wanna know how many scientists, mathematicians, engineers, hackers, artists are hiding in their closets and their garages,” Lunger said. “Don’t do it by yourself; come share.”