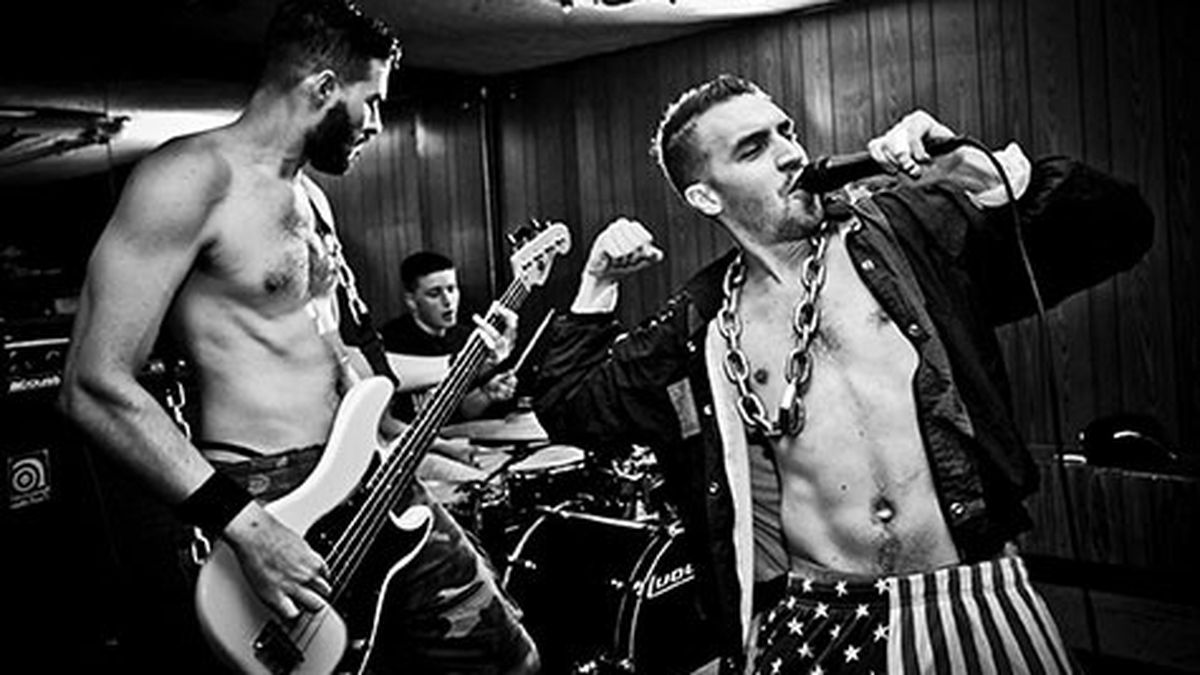 With his popular, satirical news site, the musician and writer punks punk.

On December 30, TheHardTimes.net published an article titled “7 Dead, Hundreds Injured After Joke Told at Punk Show.” A bit of satirical reporting on a typical, humorless punk audience, the article is also something of a mission statement for the newly launched website.

“I’ve been into punk and hardcore my whole life,” said Matt Saincome, the local writer and musician who launched the site in November. “One thing I’ve noticed is that punks have a hard time laughing at themselves.” In a way, he continued, “punks are the worst audience to make a joke to.”

The numbers suggest otherwise. Saincome, 24, said that The Hard Times garnered more than a million views in its first five weeks. Bylines are attributed collectively to The Hard Times staff, an assortment of more than sixty people. “The site — like most projects in punk — loses money,” Saincome said. A recent graduate from San Francisco State University with a degree in journalism, Saincome is a freelancer for SF Weekly and Vice. His website, launched with modest expectations, has accrued contributors from prominent media outlets such as Spin, Complex, and The Daily Show.

The farcical December 30 story continued, “Jeremy’s band, Meat Factory, has been kicked off of two upcoming shows. … Most forums dedicated to punk or hardcore have at least two threads going about the scandal.” The stories are designed to be relatable, touching on subcultural themes that anyone with a passing interest in punk could understand. For Saincome, though, the lethal joke story is personally significant.

Saincome, who grew up in Danville, started the straightedge hardcore band Zero Progress with his brother in 2009. Saincome was frontman. In a genre that’s justly decried for privileging adolescent macho posturing at the expense of other perspectives, the hardcore frontman is a particularly maligned figure. A typical caricature entails a shirtless bruiser gesturing and shouting inanities. Lots of hardcore bands offset the cliché; Saincome decided to parody it.

On stage, he became The Champ. “Growing up in the punk scene, you start to see patterns,” Saincome said. “When I got to be the guy with the mic, I created this character who was super macho and said things that I felt other frontmen were saying with their body language.” In an interview — in character — on a straightedge-themed podcast called Edgeland, Saincome told the host, “I’m actually the president of punk, the champion of hardcore, and the king of west coast straight-edge.” At shows, the band literally wielded chains. Inspired by Hard Skin, an English band that hyperbolizes another punk subgenre, Oi!, to foreground the music’s latent humor, Zero Progress and The Champ exploited the comedic value of hardcore’s clichés by exaggerating them to absurd degrees.

Not everyone appreciated the big conceptual gag. When Zero Progress played out of town, local critics of the band sent emails to bookers in protest. Management at The New Parish was livid, claiming that the band’s chains violated the club’s weapon policies. To lovingly mock hardcore by exaggerating its least-liked qualities is, of course, a reckless endeavor. That was the point. Zero Progress and The Champ “retired undefeated” last year, Saincome said, but his newest act, Pure, was preemptively banned from performing at 1-2-3-4 Go! Records.

Between 2009 and 2012, Saincome also published six issues of the zine Punks! Punks! Punks! In tandem with Zero Progress’ prickly tenure, the zine cheekily documented the punk scene, skewering friends and enemies alike. One recurring feature was that Saincome awarded and revoked “punk points” — arbitrarily and according only to his whims, naturally. Apparently, certain individuals remain indignant. According to Saincome, “There are still people who — to this day — when I walk into a room they give me dirty looks because I took away their punk points.”

If Zero Progress was an unrepentant provocation, a suburban outfit storming Oakland with Punks! Punks! Punks! as its insurrectionary tabloid, The Hard Times is a slightly more mature outlet for similar transgressions. It focuses on topics relatable to punks everywhere, which accounts for its runaway popularity — but The Hard Times isn’t above vindictive editorializing.

Recently, an online acquaintance of Saincome’s alerted him to a tweet by Kerry McCoy, member of the popular San Francisco-based metal act Deafheaven. McCoy called the site “fucking stupid,” and implored his followers not to post about it. “We thought it was funny — like, what exactly was bothering him?” Saincome said. “As soon as we saw that, we knew we’d make fun of him.”

Within 24 hours, the site ran a piece headlined “Deafheaven Bassist Falls Asleep on Stage.” It concludes: “The Hard Times reached out to the Deafheaven vocalist for comment but his response was too low in the mix for us to understand.” Saincome said, “They’re known to be pretentious. We thought it was funny how humorless he was.”

Hard Times headlines often underscore real punk gripes. A recent piece described Ian MacKaye, the elder statesman of American hardcore, preparing for a day of nonstop documentary interviews. It’s true that MacKaye, along with storied frontmen such as Henry Rollins and Thurston Moore, are seemingly ubiquitous in documentary endeavors, even when they aren’t directly connected to the topics at hand. Is it backwards that the chroniclers of punk, which ostensibly touts egalitarian principles, give such disproportionate airtime to a few aging dudes?

It’s a valid question, and a possible takeaway from The Hard Times piece. Saincome welcomes that reading, but stops short of extolling the transformative cultural power of humor. “The site is meant to make people laugh and have a good time,” he said. “I’m a fan of most of the things we write about.”

Indeed, The Hard Times frequently targets Saincome’s own affiliation: straightedge. A recent headline read, “Straightedge Man Involuntarily Following ‘Don’t Fuck’ Rule.” The joke refers to a lyric from Minor Threat’s “Straightedge” that some people interpret as a suggestion to abstain from sex in addition to drugs and alcohol. Another story described a straightedge vocalist bringing his own podium to band practice, a riff on the genre’s tendency to strike a proselytizing tone.

Shortly after the site was launched, Saincome was asked to book a show for some touring bands at the last minute. He secured a Monday night at Submission, the all-ages Mission District venue. Facetiously promoting it as The Hard Times’ three-week anniversary bash, Saincome announced it in an article forecasting so few attendees that not even all of the band members were going to show. He was right. A drummer sprained his ankle. The opener cancelled. As Saincome said, “Hardcore and punk are so funny that just writing about what really happens is good enough. We don’t even need satire.”