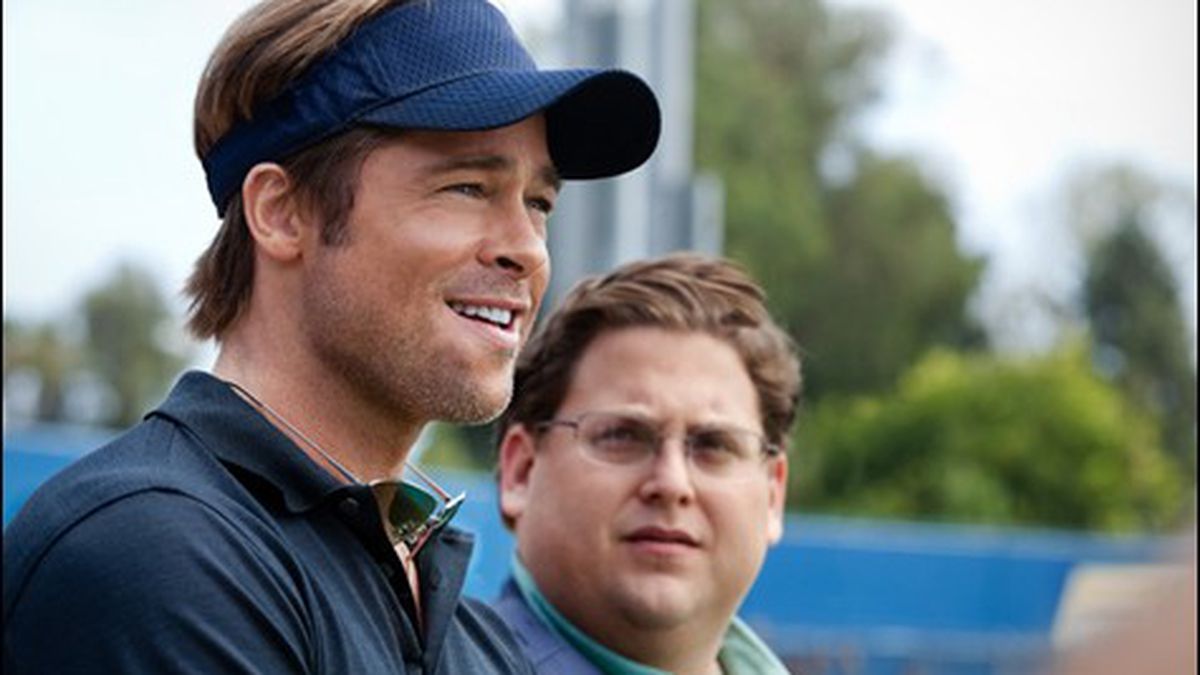 From Moneyball to war documentaries to The Rum Diary, standout movies this fall explore themes of a more adult nature.

Let’s try to be grownup about this, shall we? Summer is over. It’s time for school-vacation blockbusters about comic-book heroes and giant robots to give way to name-brand auteurs, high-profile foreign films, and “serious dramas” with people sitting around in rooms talking to each other face-to-face, instead of hurling lightning bolts. Plus a few guilty pleasures.

Just because Hogwarts lies in ruins doesn’t mean that fall movies necessarily lack magic. Oh no, far from it. It’s just a different form of magic. The following is our critical guide to a few of the many new movies scheduled for release in the Bay Area in the busy pre-holiday awards-run-up season, or as we call it, fall. Consult the weekly listings for updates. This year in particular, opening dates can be slippery.

Film preservation is the focus of the UCLA Festival of Preservation series at the Pacific Film Archive, but it’s also our chance to see a smorgasbord of rare films — Cecil B. DeMille’s The Crusades, Barbara Loden’s Wanda, Vitaphone music shorts, Douglas Sirk’s Sleep, My Love; Robert Altman’s Come Back to the Five and Dime, Jimmy Dean, Jimmy Dean, etc. — in brand-new prints projected with PFA expertise. September 1-October 31.

Strong pre-opening buzz for Warrior, a mixed-martial-arts fight drama starring a Brit (Tom Hardy of Inception) and an Aussie (Joel Edgerton from Animal Kingdom) as a pair of rumbling brothers and Nick Nolte as their alcoholic ex-pug dad. Directed by Gavin O’Connor, whose Pride and Glory looked at siblings in the NYPD. Shades of The Fighter? September 9.

A monster comes out of the Louisiana swamps to threaten the locals in Fred Andrews’ directorial debut, Creature. One of the locals is played by exploitation icon Sid Haig (The Big Bird Cage, Foxy Brown, House of 1,000 Corpses), so how bad could it be? September 9.

Everyone talks about the Seventies but no one did anything about it until “The Outsiders: New Hollywood Cinema in the Seventies” at the Pacific Film Archive. Come see why that decade is legendary, with milestone movies by Elaine May, Hal Ashby, Floyd Mutrux, Jonathan Kaplan, Charles Burnett, Terrence Malick, Martin Scorsese, Larry Cohen, and the inimitable Melvin Van Peebles, whose Sweet Sweetback’s Baadasssss Song should be taught in schools. September 2-October 27.

Avant-garde and experimental films of the 20th century take center stage in the Pacific Film Archive’s series “Alternative Visions.” The filmmakers are the cream of the art-film crop: Martha Colburn, Robert Kramer, Alexander Dovzhenko, Jordan Belson, and Chick Strand. Find out where today’s fantasy creators are stealing their concepts from. September 7-October 26.

Another remake? Producer-director Rod Lurie (Nothing but the Truth) isn’t the only one who admired Sam Peckinpah’s Straw Dogs, but he is the only one who’s attempting to go Bloody Sam one better with a straight-faced redo of the bloody fish-out-of-water saga. It stars James Marsden and Kate Bosworth as a screenwriter and his wife who face hostility when they move to the South. James Woods fits into the cast, too. September 16.

Denis Abramovich Kaufman, aka Dizga Vertov, one of the most influential directors in film history, gets major props when the Pacific Film Archive presents “Kino-Eye: The Revolutionary Cinema of Dziga Vertov.” It focuses on his “Kino-Pravda” and “Kino-Week” series of agit-prop shorts, made during and after the Russian Revolution. For pure graphic punch they’re fairly inimitable — although many have tried. September 21-October 25.

Oakland A’s fans, don’t despair. We can still salvage a smile from this horrendous baseball season when Moneyball hits the screen. The big-budget adaptation of Michael Lewis’ hit book features Brad Pitt as Billy Beane (hah!), Philip Seymour Hoffman as Art Howe (huh?), Royce Clayton as Miguel Tejada (oh), and maybe you, intrepid Athletics supporter, as an extra in the stands, back in the day when the A’s were, uh, newsworthy. September 23.

Restless boasts one of today’s most interesting young actresses, Mia Wasikowska (Jane Eyre), as a terminally ill woman who bonds with a terminally ill young man (Henry Hopper) and the ghost of a WWII kamikaze pilot (Ryo Kase from Letters from Iwo Jima), somewhere a million miles from where we’re standing. Gus Van Sant directs. September 23.

George Clooney runs for president. His character does, that is. Ryan Gosling, Marisa Tomei, Paul Giamatti, Evan Rachel Wood, Philip Seymour Hoffman, and Jeffrey Wright stand by. The Ides of March, directed by Clooney from a screenplay he co-wrote, opens October 7.

The Thing is reportedly a prequel to the oft-filmed sci-fi shockeroo about a monster at the South Pole. Mary Elizabeth Winstead and Ulrich Thomsen play scientists who unwisely stand in its path. Euro newbie Matthijs van Heijningen Jr. helms. October 14.

Foreign film fans, if you see only one movie this month, make sure it’s R.W. Fassbinder’s World on a Wire, the late German director’s take on computer technology. It’s part of a series called “Rainer Werner Fassbinder: Two Great Epics,” which also brings the 15-and-a-half-hour Berlin Alexanderplatz to the Pacific Film Archive. October 14-28.

Actor Michael Shannon, of the tormented eyes, reunites with Jeff Nichols, his screenwriter-director on Shotgun Stories, for the story of a working man driven to distraction by visions of impending calamity. It’s called Take Shelter, and costarring with Shannon is Jessica Chastain. October 21.

Filmmaker Danfung Dennis’ war documentary Hell and Back Again stakes out less-traveled territory in its profile of Sgt. Nathan Harris, a North Carolina Marine, shown on duty in Afghanistan and later recuperating from his wounds. From all reports, a powerful slice of reality. October 21.

A young woman returns from a mysterious rural cult in Martha Marcy May Marlene, and her loved ones worry about her behavior, with good reason. Writer-director Sean Durkin’s drama stresses the acting of Elizabeth Olsen in the title role, but a lingering creepiness also factors in. October 21.

Johnny Depp and the late Hunter S. Thompson continue their one-sided collaboration with The Rum Diary, writer-director Bruce Robinson’s adaptation of an early Thompson novel about a New York journalist who moves to Puerto Rico and falls in with … wait for it … a wild group of alcoholics. Aaron Eckhart, Amber Heard, Giovanni Ribisi, and Richard Jenkins fill out the cast. October 28.

Dominik Moll, maker of The Lemming and With a Friend Like Harry, ventures into similarly discomfiting territory with his adaptation of The Monk (Le moine), a narrative of licentious goings-on behind the walls of a 17th-century Spanish monastery. It stars Vincent Cassel and Deborah François. November 4.

Finnish international auteur Aki Kaurismäki (Juha) fastens onto a multi-character story of immigrants and immigration in Le Havre, which he wrote and directed. Among the large cast are French actor André Wilms and frequent Kaurismäki collaborator Kati Outinen. November 11.

The new one from enigmatic Danish director Lars von Trier, Melancholia, boasts a potentially powerful cast: Kirtsen Dunst, Charlotte Gainsbourg, Kiefer Sutherland, Charlotte Rampling, John Hurt, and Stellan Skarsgård. The scenario is curiously similar to a few other 2011 releases — the imminent destruction of Earth and its effect on the characters. November 11.

They probably count as “holiday” releases instead of “fall,” but Alexander Payne’s The Descendants (a family drama with George Clooney) and David Cronenberg’s historical drama A Dangerous Method (Viggo Mortensen as Sigmund Freud, Michael Fassbender as Carl Jung) belong on any conspicuous-culture-consumer’s to-do list, for their directorial pedigrees alone. Both open November 23.