Plus, a health inspector forbids Anula's Cafe from serving meat. 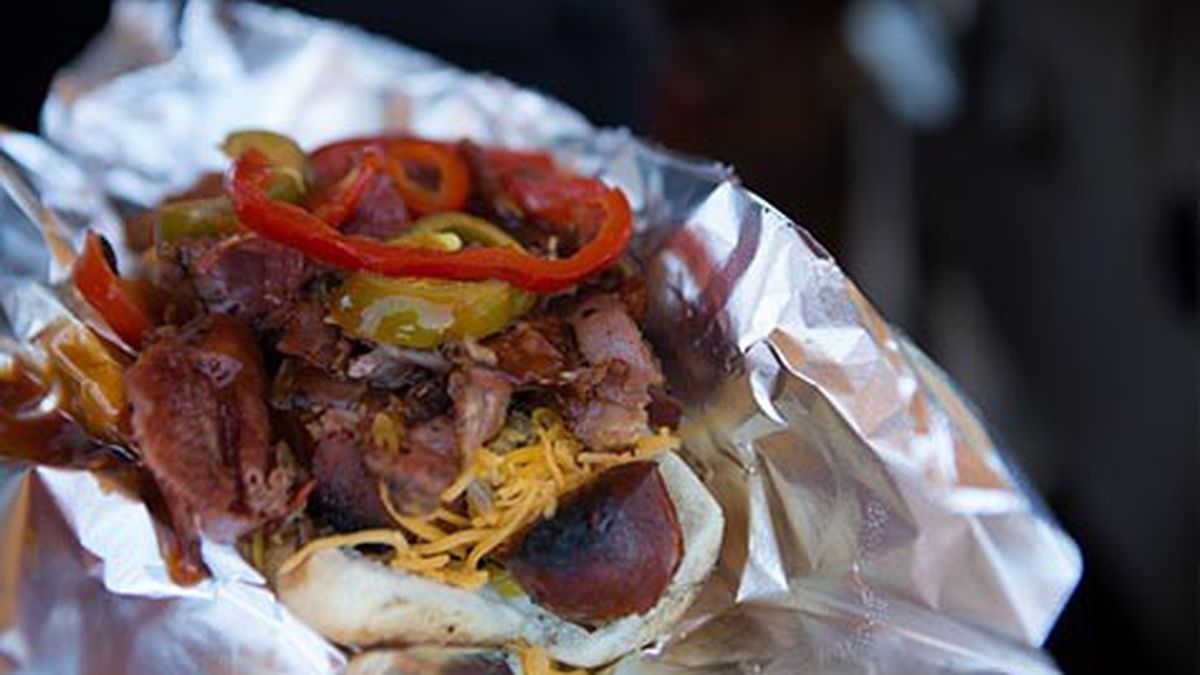 On a bright Saturday afternoon in August, the line was five customers deep at East Oakland’s most famous grilled links and hot dog stand, and an older African-American woman was telling the proprietors that she thanks Jesus for them, and for all of their success. “Just look at this line!” she said. “I’m praying for you.”

I’d come to the corner of 69th Avenue and International Boulevard to check out a food cart I’d heard about through vague rumors and scattered Yelp reviews. But in this particular stretch of East Oakland, it seemed like everyone was a regular.

Marco “Co” Pollard, the 28-year-old proprietor of the cart, said he’s been running the yet-unnamed business for three years now, together with his nephew Ramone Curtis, a sophomore at Skyline High. Every Saturday and Sunday, Pollard parks the cart curbside from about noon to 6:30 p.m.

It’s a humble operation — just a flat-top griddle set up on a trailer hitched to the back of an old station wagon. A crude wooden roof protects the food from the elements, and from birds overhead. But business is good, Pollard said. On Saturdays, most of his customers are people who live in the neighborhood, but some regulars come from as far as Vallejo. Sundays are all about the after-church crowd.

Pollard said he wants to name the cart “Grandma Mary’s,” after his grandmother, who told him when he was only five years old that he would own his own business someday. The menu is simple and streamlined. Hot links, mild links, and hot dogs are all $2 each. For $2 more, Pollard will add pastrami. A grand total of $5 buys you “The Kitchen Sink,” which adds bacon to the mix.

Health food this is not. But while some Slow Food purists might snub their noses, a fully loaded pastrami hot link is a beautiful, ridiculous thing — especially if you have a wicked case of the munchies. The small, soft hot dog bun is stuffed to bursting with a split-grilled link and myriad toppings. There’s a good chance that some of it will end up on your pants.

But as far as meat-on-meat combinations go, this one makes a lot of sense: Each meat enhances the other’s smoky quality, and the pastrami adds a lush fattiness that takes the sandwich to another level. Eating this is a pure, uncomplicated pleasure, much like eating a good Philly cheesesteak, or a bacon-wrapped hot dog sold by a Mexican street vendor.

For now Pollard and Curtis operate the cart as a weekend side gig. The next step is to try to get a booth at one of Oakland’s farmers’ markets — Pollard said he’s already started the application process. What he doesn’t want, however, is a brick-and-mortar restaurant.

That, Pollard explained, is what keeps fans always coming back for more.

By far the most popular dish at Anula’s Cafe, a tiny deli-cafe in downtown Oakland, is its Tuesday jerk chicken special, a recipe that Anula Edirisinche, the restaurant’s Sri Lankan owner, learned from her Jamaican mother-in-law. For the past two weeks, however, the restaurant hasn’t been able to serve its jerk chicken, chicken rotis, or curry-tinged tilapia fillets. In fact, two weeks ago, an Alameda County health inspector ruled that Anula’s, located at 1319 Franklin Street, could no longer serve any meat dishes — only vegetarian fare.

According to Edirisinche, the ruling threatens the continued existence of her business. She doesn’t believe she can stay open if she only sells vegetarian dishes. But she also can’t afford to pay an additional $25 to $35 an hour — on top of what she already pays for rent — to do all of her cooking at a commercial kitchen space for two or three hours every day, as required by the health department. And because she still has four years left on her lease, moving to a new location isn’t an option.

The exact nature of the health code violation remains somewhat unclear. Edirisinche said the inspector told her that the kitchen at Anula’s is too small for her to cook anything, but especially not meat. The online record of last week’s inspection makes no specific mention of meat, however — the main violations have to do with food safety certification and holding “potentially hazardous foods” at a proper temperature. At first, Edirisinche thought she could correct that problem by buying Sterno burners to keep the food hot in warming trays, but the inspector later nixed that option.

Anyone who has ever ordered food at Anula’s is certainly aware of the tight quarters. Indeed, Edirisinche admitted that in previous years inspectors had also told her that she really shouldn’t be cooking in that kitchen. But in the end they’d always left her alone.

Officials with the Alameda County Environmental Health Agency did not respond to a request for comment.