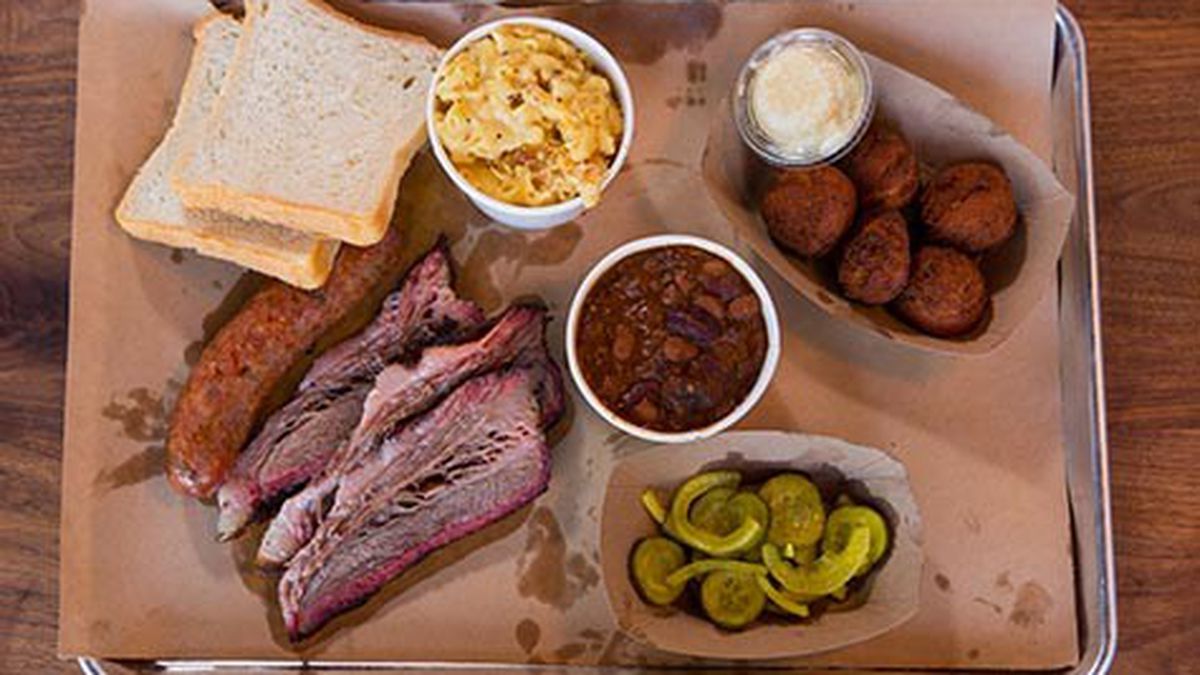 If barbecue is a religion in Texas, here in the Bay Area it is, for many, a hobby at best. So, if you’ve acquired a taste for lovingly slow-smoked meats, when a high-profile restaurant opens in Berkeley claiming to serve Texas-style barbecue, you pay attention.

Perdition Smokehouse is the first barbecue venture for Chuck Stilphen, the beer guru behind The Trappist and Mikkeller Bar, and Mike O’Brien, the chef who oversees the food offerings at those beer-centric establishments. Located in downtown Berkeley, the restaurant has many of the accoutrements of what some might call a hipster barbecue restaurant — big stacks of wood piled, somewhat ostentatiously, at the front of the restaurant and, a lovely back patio with custom-built picnic tables, dart boards, and cornhole. A “Periodic Table of Meats” that stretches the length of the room is the primary decor feature.

Mostly, though, Perdition distinguishes itself with touches that even someone with only moderate gourmet inclinations should appreciate: A killer draft beer selection. Blue Bottle iced coffee on tap. A soda fountain machine stocked with fancy-ish Boylan sodas. (A cup, with free refills, will set you back $2.)

And while the barbecue doesn’t quite reach the life-altering level that would inspire hosannas, it is pretty darn tasty.

O’Brien is a veteran sausage maker, but honest-to-goodness barbecue is a new pursuit. The Texas style he has adapted is characterized by a dry rub (Perdition’s consists of salt, pepper, coriander, mustard powder, and a few other spices) and a slow-and-low wood-smoking process. No sauce, traditionally. No utensils, even. “We do give you a fork,” O’Brien said.

It feels appropriate that, for a nice-looking restaurant, Perdition is an exceedingly casual place. You order cafeteria-style (beer at one counter, food at another), and much of the food is served on butcher-paper-lined trays. The prices are reasonable. And dainty eaters will be glad to note that Perdition will happily sell you a quarter, or even an eighth of a pound of pulled pork or brisket.

The best way to sample a few different items is to order a two-meat plate, which comes with two sides. Meat-wise, the options are pork ribs, shredded pork shoulder, hot links, chicken (available a la carte by the quarter- or half-bird), and — the most iconic cut in the Texas barbecue oeuvre — beef brisket.

At Perdition, each whole brisket — sliced thickly to order — wobbles and glistens with so much meaty juice, it sent my expectations through the roof. In truth, though, both times I ordered the brisket, I found it a little bit dry and salty. Like all the meats at Perdition, it was slowly smoked over a mix of oak and almond wood. It was good brisket, even if it wasn’t as lush and tender as B-Side BBQ’s version — my gold standard in the East Bay.

Fortunately, the brisket was far from the best meat at Perdition. That distinction might belong to the stubby, St. Louis-cut ribs, the ideal choice if you’re a connoisseur of “bark” — the crunchy, well-spiced crust that forms on the outside of the meat. The meat came clean off the bone and had a lush fattiness that I enjoyed. And the house-made hot links — made with pork shoulder, beef fat (trimmed from the brisket), and roasted chilies — were some of the juiciest that I’ve ever had.

Even if they’re verboten at traditional Texas barbecue joints, Perdition offers a full slate of house-made barbecue sauces. The standouts were a tangy yellow South Carolina-style mustard sauce and something O’Brien has dubbed the Brew BQ sauce: Infused with cold-pressed coffee and two different stout beers, the sauce had a chocolaty bittersweetness that was delicious with both the brisket and the ribs.

As a rule, a barbecue restaurant is no place for a vegetarian, and Perdition is no exception. Still, in true Bay Area style, the restaurant’s vegetable-centric side dishes occasionally outshined the meat. The mac ‘n’ cheese was cooked in a classic oven-baked style, with crispy caramelized-cheese edges. The “Texas caviar” — a salad composed of black-eyed peas, corn, chilies, and fresh herbs — was just the kind of bright, refreshing bite I crave during a heavy barbecue meal. And, unlike its mayo- and vinegar-laden brethren, Perdition’s potato salad tasted mostly of whole-grain mustard and actual potato. It was delicious.

My favorite side dish, the cowboy beans, did benefit from the addition of meat: the well-charred, extra-fatty burnt ends, cut from the brisket’s odd-shaped corners. Cooked in a pot along with two types of beans (red kidney and pinto) until it practically disintegrated, the meat gave the well-spiced beans the luxurious richness of a good chili con carne.

For appetizers, customers are limited to two options: chicken flautas (a Tex-Mex standard) and a dense, savory version of hush puppies. For dessert, I enjoyed a slice of classic, Southern-style peach pie.

Meanwhile, the focus of Perdition’s forty-tap selection is on American craft beers rather than the obscure European brews that dominate, say, The Trappist. Sour beers were featured prominently, and went nicely with barbecue.

If you want to impress your Instagram followers, though, the thing to order is the Phineas Gage, a sandwich named after a legendary construction foreman who survived a rock-blasting accident, in which a railroad spike pierced clear through his head. The sandwich is a good six inches tall and consists almost entirely of meat (chopped brisket and sliced hot links), the top and bottom Acme buns held precariously together by a thin wooden skewer; hence the name. (It’s more or less a facsimile of a sandwich served at Austin’s legendary Franklin Barbecue.) In mine, the brisket was, again, too salty and not quite tender enough. But I loved the hot links, the little nubs of soft, jiggly beef fat, and the gesture toward hedonism and abundance. A mild purple-cabbage slaw and sweet bread-and-butter pickle slices helped cut into the salt and the heaviness. So did a couple squirts of barbecue sauce.

Like any self-respecting barbecue restaurant, Perdition provides a roll of paper towels at every table. You’ll want to use them liberally.