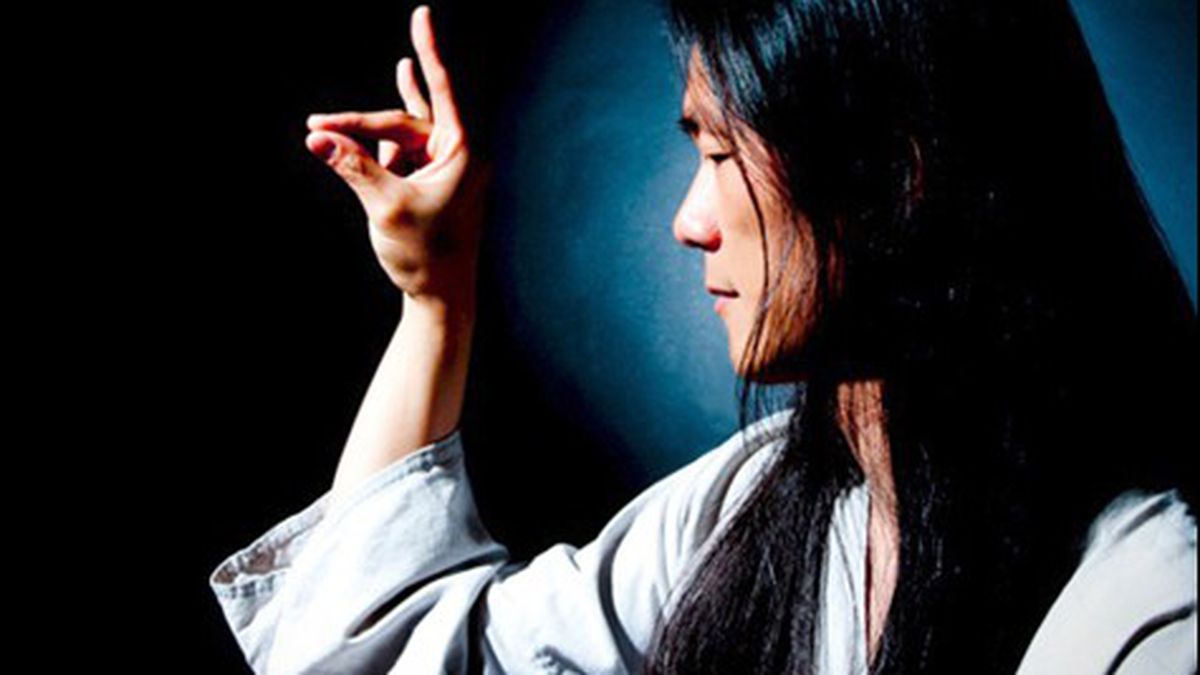 The Great Integration: A New Kind of Hip-Hopera

How one long-haired Asian guy speaks to the future of hip hop and classical music.

We might as well get this out of the way: If JooWan Kim is one of the stars of the Bay Area hip-hop scene, he doesn’t exactly look the part. Bespectacled and slight of frame, the 34-year-old Korean American wears his hair long and favors sandals and white robes — a look befitting a martial arts guru (if you’re into stereotyping like that), or maybe Jesus Christ.

Kim doesn’t rap — he has no aspirations to be the next Denizen Kane or Jin Au-Yeung. He doesn’t work the turntables; he doesn’t cull out obscure tracks to sample. Rather, he’s a classically-trained composer with degrees from Berklee College of Music and the San Francisco Conservatory. He also cusses a lot, dismisses the classical genre as mostly “old white people music,” and has an abiding love for N.W.A. Go ahead, try putting him in a box.

Here, it’s different: “Because I have long hair and I’m Asian, they’re, like, ‘Who is this guy, and why is he into hip-hop?'”

Anyway, Kim isn’t so much trying to break into the hip-hop world as he is determined to reshape it, in what might appear to be the unlikeliest of ways — by combining rapping and hip-hop rhythms with elements of his first love: classical music. And so he’s assembled a crew that not only includes two highly-regarded Bay Area rappers — Do D.A.T. and Rico Pabón — but also a flute player and a violinist and a guy on stand-up bass.

On Friday, June 8, Kim’s Ensemble Mik Nawooj (read it backwards) will perform his magnum opus, The Great Integration, at the Oasis Restaurant & Bar. The ninety-minute, two-act “chamber hip-hop opera” will feature a nine-member ensemble: strings, woodwinds, drums, the two emcees, and Kim himself holding court on the piano.

If you’re an old school hip-hop head or a classical purist, maybe you cringe a little at a term like “chamber hip-hop opera.” Maybe it makes you think of Puff Daddy rhyming over some sappy strings. Maybe it conjures images of Yo-Yo Ma trying too hard to be hip (scratch that — I’ve never seen Yo-Yo Ma do anything that wasn’t awesome).

According to Kim, the truth is that most of the time when musicians try to blend classical music with hip-hop, or any other kind of pop music, the results are disappointing. There’s the so-called Third Stream, a term Gunther Schuller coined to describe the fusion of classical music and jazz, most of which Kim says just sounds like concert music — not jazz, really. And when pop musicians try to incorporate classical music, they usually just mimic the sound by hiring a string section.

What Ensemble Mik Nawooj strives to achieve is more than just a mash-up of two genres, but rather a coherent hybrid: ambitious, multi-layered compositions that rely heavily on hip-hop rhythms, but within which the rapping is just one element — one instrument, if you will.

“I’m not trying to mix classical and hip-hop; I’m actually creating new music,” Kim explained. “It’s not classical, and it’s not hip-hop. Once you have a hybrid, it’s no longer the predecessors — it’s the next stage of evolution.”

The story of Ensemble Mik Nawooj is, in its genesis, an immigrant’s tale. As a 20-year-old Kim immigrated to the US to study classical composition at two of the great meccas for Western music: first Boston’s Berklee College of Music and then the San Francisco Conservatory of Music. He wrote piano concertos and string quartets — pretty standard stuff.

Kim said that back in Korea, classical music was a fresh, relatively new thing to study. Then he got to the States and found it no longer seemed relevant, that it had become “old white people music.”

“For me, it was not the music of today,” he explained.

While he was at Berklee, Kim met Valentino Pellizzer (now the Ensemble’s drummer), who introduced him to hip-hop. Kim says he hated it at first, but eventually something clicked and he started to like it. He rattled off a list of favorites, all old-school legends: N.W.A., Public Enemy, Wu-Tang Clan, Dr. Dre — Kim says his rhythms are mostly influenced by that G-funk style.

In 2005, while he was at the Conservatory, Kim put together a performance of an experimental piece that ended with an emcee, Oakland’s Kirby Dominant, doing a little freestyle rap — the rest of it was chamber music infused with hip-hop rhythms. According to Kim, the public response was so positive that Kirby Dominant suggested they cut an album together.

So Kim and his old Berklee roommate, Christopher Nicholas, who also serves as the group’s lead vocalist, founded Ensemble Mik Nawooj. The first album they recorded — The Great Integration — took about six months for Kim to compose. Since he’d conceived of it as an “opera,” the first step was coming up with a narrative. The piece introduces the listener to five corrupt tycoons (“material lords”) who run amuck and cause the world to be “in the shit,” as Kim put it. The story deals with the destruction of these lords, at the hands of someone called the Black Swordsman — Kirby Dominant’s character — so that the old system can be wiped out and spiritual renewal can take place.

“The opera is about the end of the world, actually,” Kim said with a chuckle.

Kim composed all the music, and he gave the emcee a detailed synopsis of the story on which to base his lyrics. Later, Kim composed a second act and brought on Rico Pabón to assume the persona of the Water Bearer. And when Do D.A.T. — best known for an album centered on Duke Ellington’s repertory — replaced Kirby Dominant for the first act last November, he brought his own stamp to the piece.

Both emcees said The Great Integration is the most unique project they’ve ever been a part of. For Pabón, in particular, that’s saying quite a lot: Among other things, he’s been a member of a 10-piece salsa/hip-hop/reggae band and gigged with Linda Tillery’s Cultural Heritage Choir.

Pabón explained that Kim isn’t doing what hip-hop producers normally do with a piece of music — taking bits and pieces and chopping them up.

“It’s not just groove-oriented where there’s one thing looping over and over. It starts somewhere and you really journey with it,” he said.

Because each act is made up four or five songs that are each about ten minutes long, the instrumentation has a chance to go through movements and changes that aren’t possible within the framework of a three-and-a-half-minute pop song.

Watching a handful of YouTube clips of prior performances, I got a feel for what Pabón was saying: Within a single song, there’d be parts that were like a jazz number, each instrumentalist taking a turn to solo. There was a bare-bones strings sequence that built and swelled to a climax. There were long piano passages as haunting as minor-key Rachmaninoff — and then the drums would cut in, and the double bass and, a couple measures later than you expect, Pabón’s voice, lilting and ebullient.

“It’s not some pretty chamber music with a little backbeat or something,” Pabón stressed. There are parts that are flat-out “nasty” — parts he plans on sampling in the future.

“You can add a drum beat to anything,” Pabón said. “But it’s different if you’re going to find where the drums are supposed to be and make it its own thing.”

Neither Pabón or Do D.A.T. (a.k.a. Davin Anthony Thompson) had considered themselves fans of classical music, but both rappers said their collaboration with Kim has changed the way they write and listen to music — Thompson likened it to how when you beat a boss in those old Megaman video games, you acquire that boss’s power.

“We’re Captain Kirk out here,” Thompson said. “We’re boldly going where no emcee has gone before.”

I asked Thompson if he thought Kim’s genre-bending efforts spoke to the future of hip-hop as a whole.

“Absolutely,” he said, pointing out that cross-genre collaborations have always been a part of hip-hop, dating all the way back to Run D.M.C. and Aerosmith. “To me, hip-hop is alchemy. Hip-hop is an ever-expanding universe.”

Thompson describes himself as a “hip-hopper to the fullest” and said he sees that quality in Kim too.

“He has that hip-hopper’s rebel mentality,” Thompson said. “‘I know the rules, but fuck the rules. I’m going to make something out of nothing.’ That’s why I really relate to JooWan Kim.”

Corrections for the Week of November 27