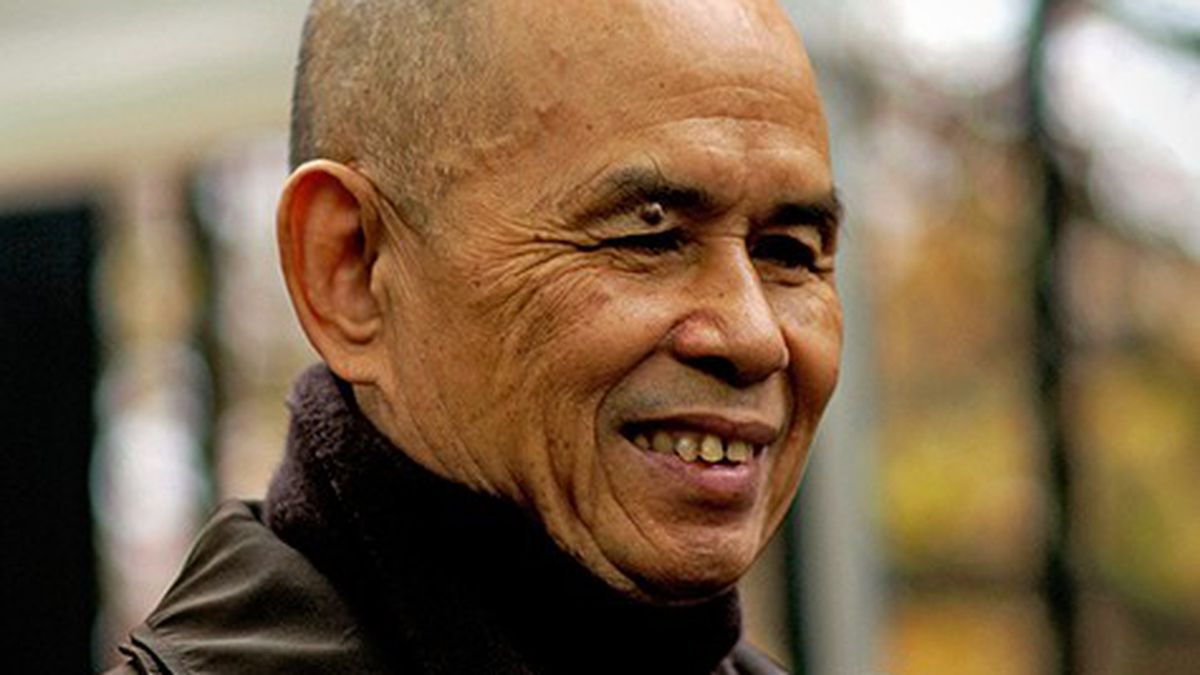 In praise of activism with honesty and compassion.

Thich Nhat Hanh, one of the most inspiring figures of the 20th century, is currently receiving medical care in the Bay Area. Hanh suffered a serious stroke late last year and has been convalescing ever since. Doctors at UC San Francisco Medical Center have provided him with a variety of treatments.

A Vietnamese Buddhist monk, academic, and prolific author, Hanh pioneered the concept of “Engaged Buddhism,” a gentle activism that has influenced many who yearn for mindful awareness and social change. His life has been the embodiment of compassion, honesty, and courage — and an illustration that pacifism need not mean passivity.

Hanh became a public figure during the Vietnam War, at a time of startling iconic images of Buddhist monks in Vietnam burning themselves as part of the resistance to war. In 1965, Hanh wrote to Dr. Martin Luther King Jr., linking the struggle of Black Americans to the resistance in Vietnam and asking King to take a stand. “What the monks said in the letters they left before burning themselves aimed only at alarming, at moving the hearts of the oppressors and at calling the attention of the world to the suffering endured then by the Vietnamese,” Hanh wrote. “To burn oneself by fire is to prove that what one is saying is of the utmost importance. There is nothing more painful than burning oneself. To say something while experiencing this kind of pain is to say it with the utmost of courage, frankness, determination and sincerity.” Soon after, King delivered his legendary speech against the war, “A Time to Break Silence,” at New York’s Riverside Church.

In 1967, King nominated Hanh for a Nobel Peace Prize. Hanh, King wrote, was “an apostle of peace and non-violence, cruelly separated from his own people while they are oppressed by a vicious war which has grown to threaten the sanity and security of the entire world.” To give Hanh the prize would be a reminder “that men of good will stand ready to lead warring elements out of an abyss of hatred and destruction. It would re-awaken men to the teaching of beauty and love found in peace. It would help to revive hopes for a new order of justice and harmony.” Unfortunately, the prize committee awarded no prize that year.

Hanh’s work on issues of war, peace, and freedom did not end when the United States left Vietnam. In 2006, he wrote President George W. Bush, imploring him to end the US war in the Middle East. “It is our brothers that we kill over there. They are our brothers, God tells us so, and we also know it,” Hanh wrote. “They may not see us as brothers because of their anger, their misunderstanding, and their discrimination. But with some awakening, we can see things in a different way, and this will allow us to respond differently to the situation.”

And, along with the Dalai Lama, Hanh has supported efforts by Buddhists for religious freedom in Tibet. Crucially, in his unrelenting work for good, Hanh has taught the value of means as well as ends. In a talk “Awakening the Heart,” available on YouTube, he said, “When another person makes you suffer, it is because he suffers deeply within himself, and his suffering is spilling over. He does not need punishment; he needs help. That’s the message he is sending.”

In his book Interbeing, Hanh listed fourteen precepts of Engaged Buddhism. Among them are direct challenges to the orthodoxy of our economic and political system today, in which people are often valued only as “human capital.” They include “Do not accumulate wealth while millions are hungry,” and “Do not invest in companies that deprive others of their chance to live.” With this focus, he is distinct from the Dalai Lama, the more famous Buddhist public figure. In 2014, the Dalai Lama inexplicably cozied up to Wall Street, appearing with hedge fund managers in New York City on a panel sponsored by the American Enterprise Institute and Dan Loeb, a notorious opponent of public education. At the event, Loeb preached the view that financial markets “make the world a better place.” After Loeb’s presentation, the Dalai Lama, according to press reports, said that Loeb gave a “wonderful” presentation, and that through the session he developed “more respect” for capitalism. It is hard to imagine Hanh saying these words.

Hanh is a fervent believer in the power of meditation and awareness when frankly practiced, especially when directed toward progressive social interaction. His teachings on meditation are accessible, and constantly remind readers to keep attention to the rhythm of breath. His attitude is quite different from today’s corporate “mindfulness” craze. From Silicon Valley to Wall Street, companies are pushing employees to meditate. The theory is that corporate meditation is a “good investment” for a company, making employees more productive and the company more profitable. While any meditation that alleviates suffering and makes one think and feel more deeply is a good thing, this corporate fad is far from Hanh’s vision of meditation.

Finally, in classical Buddhism, meditation and enlightenment are often considered an individualistic ethic. But for Hanh, enlightenment is only possible when one “stays in touch” with the world. The interrelatedness of life is foundational to his writings; his aspiration for “interbeing” fosters an appreciative understanding that one’s apparently separate self is actually thoroughly intertwined with other selves. In our atomized world, his vision of a sharing life should be cherished. During his life, he also has established a number of loving communities, including the Deer Park Monastery in Southern California. In Community as a Resource, he quotes a story from the Buddha, “The nature of a community is harmony, and harmony can be realized by following the Six Concords … sharing space, sharing the essentials of daily life, observing the same precepts, using only words that contribute to harmony, sharing insights and understanding, and respecting each other’s viewpoints.”

These are fine words in our fractured world where politicians promote constant fear and hatred of others. Thich Nhat Hanh’s life is a magnificent example of activism and compassion. Do yourself a favor and pick up one of his books.

And breathe — in and out.