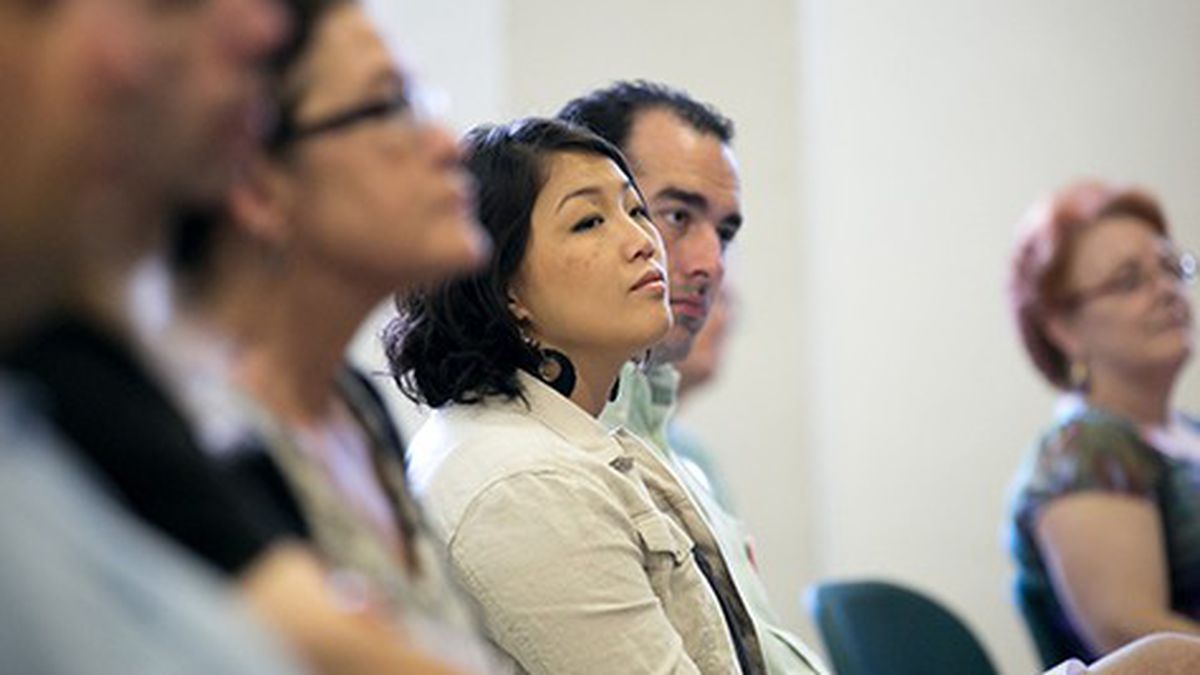 Sometimes called an "atheist church," Oakland's Sunday Assembly could best be described as humanist, more indicative of a celebration of life than a call for anti-theism.

On a recent Sunday morning in Oakland’s Pill Hill neighborhood, the sound of voices raised in song spilled out onto Fairmount Avenue from the open doorway of the Oakland Peace Center. Inside the hall, some fifty people stood in front of their folding chairs, swaying and singing along with the lyrics displayed on a large projection screen at the front of the room. It was a church-service scene typical of any Sunday morning.

But then it sank in: The song into which the congregation was pouring its collective soul was not a church hymn. It was Sister Sledge’s “We Are Family.”

Founded in 2013 by two London comedians disenchanted with organized religion, the secular Sunday Assembly has been called an “atheist church,” but that description doesn’t quite harness the mix of characters — agnostics, atheists, Unitarians, secular Jews, and non-religious and formerly religious individuals of all stripes — who attend on the last Sunday of every month.

Oakland’s assembly, known as Sunday Assembly East Bay, draws some fifty to seventy attendees each month and is one of nearly seventy assemblies that currently exist around the world.

The “church” part of “atheist church” is accurate in that assembly members congregate in a hall for a formal hour-long program that involves singing (often something by the Beatles or Bill Withers), readings, listening to a speaker, and passing a donation basket, followed by an informal potluck. But beyond that, it’s all up to each attendee’s discretion. Sing, or don’t sing. Agree with the speaker, or don’t. Believe in whatever spirituality, or lack thereof, you’d like to. The only thing that’s asked of attendees is that they keep the gathering friendly, apolitical, and non-religious.

“I think what was really exciting to me about Sunday Assembly was that it’s new,” said Dan Lawlor, a regular attendee, in an interview, comparing Sunday Assembly to other congregations one might attend. “For better or for worse, it doesn’t have five hundred years of baggage. You can create it.”

Fellow attendee Debra Wong, who identifies as atheist, said simply, “This feels like a space where I can be my whole self.”

Sunday Assembly has a motto — “Live better, help often, wonder more” — that could best be described as humanist, more indicative of a celebration of life than a call for anti-theism. Organizers strive to keep their assemblies “radically inclusive,” just as welcoming of a regular attendee’s visiting Protestant grandma as of a die-hard Richard Dawkins devotee.

“We’ve got the best parts of a church,” Oakland’s assembly advertises on its Meetup group page, “without any of the religious dogma.”

British comedians Pippa Evans and Sanderson Jones first hit upon the idea of “atheist church” while driving together to a stand-up gig in Bath, Great Britain, two years ago. Riffing about church in the car, they began reflecting on the real joy people seemed to derive from their sense of religious and spiritual community. (Evans had grown up Christian; Jones didn’t identify as religious but quite enjoyed Christmas concerts.) What about a church for non-believers? they wondered out loud.

That January, Evans and Jones staged the first Sunday Assembly service in London. It wasn’t a tongue-in-cheek shtick. They were serious about the space they were offering, just as they were about offering it in a way that turned religion on its head. More than two hundred people showed up to the first event. At the next event, there were three hundred, prompting Evans and Jones to begin holding two services a day. Then people started contacting them from all over the globe, asking them how to start their own.

So that November, Evans and Jones set out on a Sunday Assembly “world tour” to bring their secular service to audiences in Europe, North America, and Australia. The comedians connected with organizers interested in helping to set up Sunday Assembly events in their own cities. The local organizers were responsible for setting up logistics and finding speakers. Evans and Jones would show up to support the event.

Enter Oakland resident Daniel McCoy. McCoy, who had left Pentecostalism as a teenager and now identifies as atheist, had read about London’s first successful Sunday Assembly in The Guardian. When he heard that the founders were bringing the assembly stateside, he was interested in getting involved. An acquaintance of McCoy’s, who happened to be organizing a Sunday Assembly tour stop in San Jose, persuaded McCoy to serve as the assembly’s main speaker there.

McCoy has a long resume of public speaking engagements thanks to his job as an “illumination materialist” at Pixar, so he gamely agreed to speak. In preparation, he wrote a talk about one of his greatest personal inspirations, Carl Sagan. In particular, McCoy drew from a Sagan lecture called “Pale Blue Dot” — a reference to Earth as seen from beyond the rings of Saturn — in which Sagan, as McCoy described it, “talks about how everything human, everything that’s ever happened, every person that ever lived, happened on this pale blue pixel” called Earth. It’s a perspective encompassing both smallness and interconnectedness, and McCoy finds it so moving that he watches the lecture online every year on Sagan’s birthday.

McCoy’s Pale Blue Dot talk at the Sunday Assembly in San Jose went swimmingly. He could tell, because, in the middle of it, Sunday Assembly co-founder Sanderson Jones, who was in the audience, bounded up excitedly to find the Sagan video on a laptop.

“We all watched the Pale Blue Dot together, just spur of the moment,” McCoy said, recalling Jones’ rangy excitement, the ensuing silence in the room, and the sense of collective wonder as, onscreen, a tiny blue planet became dwarfed by Saturn’s immensity. “I said to myself, ‘I want to go to a church that finds this sacred.'”

The next day, at Jones’ urging, McCoy gave the same talk at a Sunday Assembly tour stop in San Francisco. Then McCoy became a founding organizer of the Oakland-based Sunday Assembly, which held its first assembly at Humanist Hall in January 2014.

McCoy had found a new spiritual gathering: one that would celebrate the wonder of the Pale Blue Dot.

Godless congregations are not a new idea, in and of themselves. Oakland’s Manifesto Bicycles hosted an irregular Sunday morning social event called Bike Church (now defunct) for years, and back in 2004, another British comedian started a cult called Join Me whose mission to “be nice” attracted thousands of followers — er, “joinees” — around the world.

The global Sunday Assembly movement is also rapidly expanding and formalizing. Sanderson Jones now works on Sunday Assembly full-time, helping to launch new assemblies and ensuring that existing assemblies adhere to a formal accreditation process — a necessary bit of bureaucracy, because, as he and Evans wrote on Sunday Assembly’s website, “It only takes one newspaper headline of ‘CHILD SACRIFICED AT SUNDAY ASSEMBLY’ to pee in the pool for everyone.”

Oakland’s Sunday Assembly is also formalizing. In March, the assembly elected its first seven board members, including McCoy, Lawlor, and Wong. Its core members now face the same challenges that Sunday Assemblies across the world are answering in different ways: How does a congregation form a coherent group identity without the guidance of dogma, history, or a god? Can such a community truly be inclusive of everyone without losing its own identity?

Lawlor said those questions — of group identity, of community, of what it means to “do good” without politics or dogma — are reflective of the possibilities that lie ahead.

“Any place where people gather and do good is something that we need, and all people deserve that, not just people who have a traditional understanding of religion,” Lawlor said.