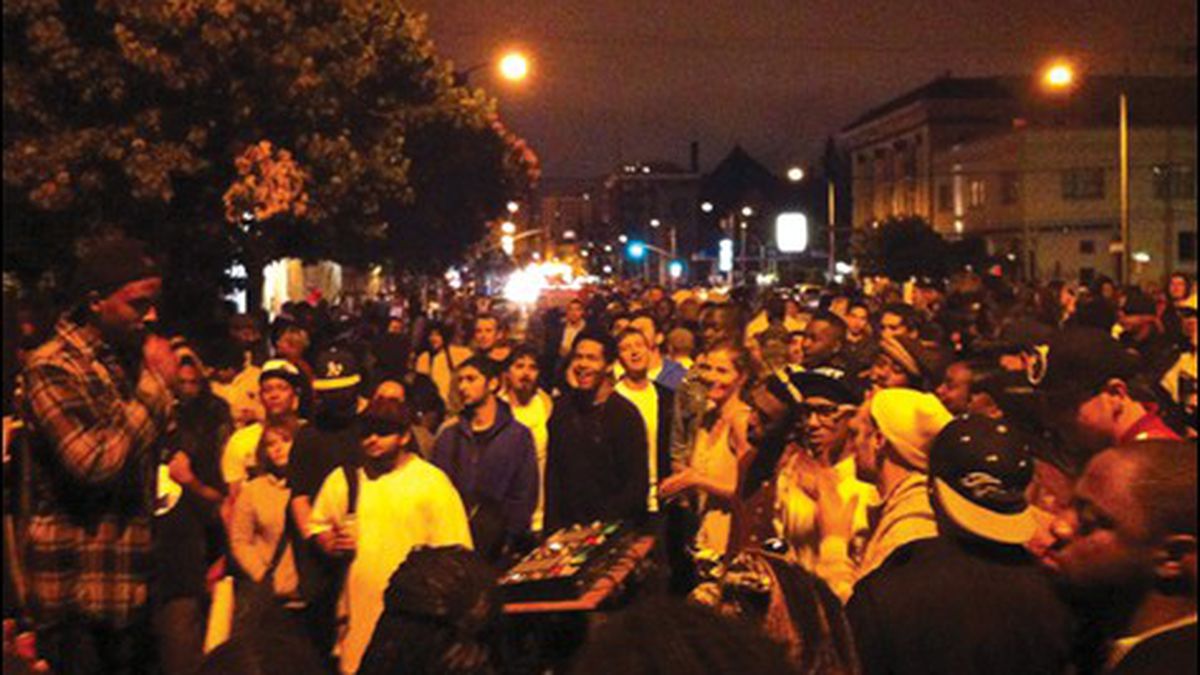 The Future of First Fridays

In 2005, when a small group of artists and gallery owners first gathered in a back corner of what was then Mama Buzz, to plan what was then unnamed and unknown, their objective was humble: to find a new, creative way to bring people into their galleries, via a monthly community gathering clustered around the nexus of 23rd Street and Telegraph Avenue. By all accounts, they were successful beyond their wildest dreams: In seven years, Art Murmur has gone from a small, scrappy get-together of local artists and enthusiasts to a veritable cultural phenomenon, acting as a model for similar events in other cities, attracting attention from national media outlets and bringing an estimated 5,000 to 10,000 people to downtown Oakland every month of the year.

But with that success came a new, unprecedented set of concerns, and, at some point, the event’s original organizers found themselves responsible for something much bigger than they’d signed up for. “Art Murmur is not a traffic enforcement agency or a parking enforcement agency,” said Marshall Lamm, current president of Art Murmur’s board. “I don’t think it’s fair to expect art galleries to shut down streets and put up Porta-Pottys and reroute busses.” Art Murmur, in short, had become too large and too popular for 23rd and Telegraph. So starting in July, for the first time in its existence, the Art Murmur organization stopped closing down the intersection and allowed the street party to flow completely into downtown.

“What’s happened here is that Art Murmur has become, for lack of a better term, a victim of its own success,” said Samee Roberts, director of marketing for the City of Oakland. With 23rd no longer closed to traffic, Roberts and her colleagues at City Hall — as well as neighborhood associations and local businesses — have voiced concerns about safety and security, concerns that challenge the spirit and call into question the future of the event. “People have been attracted to Art Murmur because it’s been unregulated and because it’s been grassroots,” said Roberts. “But our position is that nothing will dampen the spirit faster than somebody getting injured or somebody getting sick.”

At the two first Fridays since June, thousands of people filled sidewalks and spilled out into city streets, making themselves vulnerable to traffic accidents and pickpockets; meanwhile, unlicensed food vendors clogged the sidewalks, increasing the possibility of a public-health problem. During this month’s Murmur, a brick was thrown through the local Obama campaign headquarters at 18th and Telegraph, allegedly while people were inside; although no one went so far as to suggest that the crime was explicitly connected to Art Murmur, some argued that the general melee facilitated it. Firecrackers have been set off in crowded areas and graffiti has spiked, according to Deputy City Administrator Arturo Sanchez; at one point, last month, Telegraph and 23rd became so choked with revelers that an AC Transit bus was trapped in the intersection for several minutes with no safe way out. And though Sanchez said hasn’t seen or heard about any injuries yet, it’s clear that the worst-case scenario is on everyone’s mind: Last summer, at a similar art walk in downtown Los Angeles, also without street closures, a two-month-old was hit and killed by a car after its driver lost control of his vehicle amidst the chaos and jumped the curb. The tragedy was enough to spark a major re-evaluation of the event — and to prompt concerns about something similar happening here.

Whether such concerns are ever borne out, everyone appears to agree that the stakes are high. Art Murmur has, of course, been a boon for galleries, artists, and the vendors that previously lined up along 23rd, but it’s also increased Oakland’s cultural cachet immeasurably (Roberts described it as “marketing that money can’t buy”), and, though no one’s undertaken an official analysis of the event’s financial impact on the city, local bars, restaurants, and stores report significant upticks in business on the First Friday of every month — which is especially important in a city that’s scarcely been known as an arts capital, and in a local business climate that continues to struggle. “First Friday is such an awesome event for Oakland,” said Sanchez. “And it’s in everyone’s interest to see it continue on.”

That, it appears, is part of the problem: Everyone — artists, galleries, vendors, attendees, city officials, nearby businesses — has a stake in Art Murmur’s continued success, but with so many different entities involved, it’s hard to tell where control — and culpability — end and begin. “Up until recently, Art Murmur was responsible for what happened on 23rd Street [between Telegraph and Valley], but they’re not anymore,” said Shari Godinez, executive director of the Koreatown-Northgate business association. “And no one’s been really responsible for what’s been happening on Telegraph.” In other words, in becoming everyone’s event, there’s a way in which it’s become no one’s. “Our feeling is that everyone has a stake in the continued success of Art Murmur,” said Roberts. “But in this economic climate, there isn’t one entity that could pick this up and fund it.”

Some have suggested shutting down portions of Telegraph — or, really, making official what the crush of bodies has already made reality — but that poses significant challenges, seeing as Telegraph is a major traffic artery. According to Roberts, others have proposed moving the center of the event to Old Oakland, which is less highly trafficked. But either way, street closures, bus reroutings, a police detail, and various other types of infrastructure all come with significant costs, and until now, they’ve been managed on an ad-hoc basis: In preparation for August’s event, Koreatown-Northgate rented nine Porta-Pottys, bought several trash cans, and hired private security guards, at a significant expense — one that Godinez doubts will be financially sustainable in the future. According to Roberts, the city has looked into finding corporate sponsorship for the event, but then there are concerns about muddying Art Murmur’s original, grassroots mission. As of press time, the city, various business organizations, and other interests had held a number of meetings, but no one’s come to a concrete solution about what to do moving forward — and, meanwhile, Art Murmur will continue as it has for the foreseeable future and hope for the best.

“There is no talk of pulling the plug on First Friday,” Lamm said decisively. “But as it continues to get bigger and bigger, it has to be managed in a way to keep it safe and sustainable. There’s so much for Oakland to gain here.” And, he added, “there’s a lot to lose.”

Theater With a View

Hot in the City