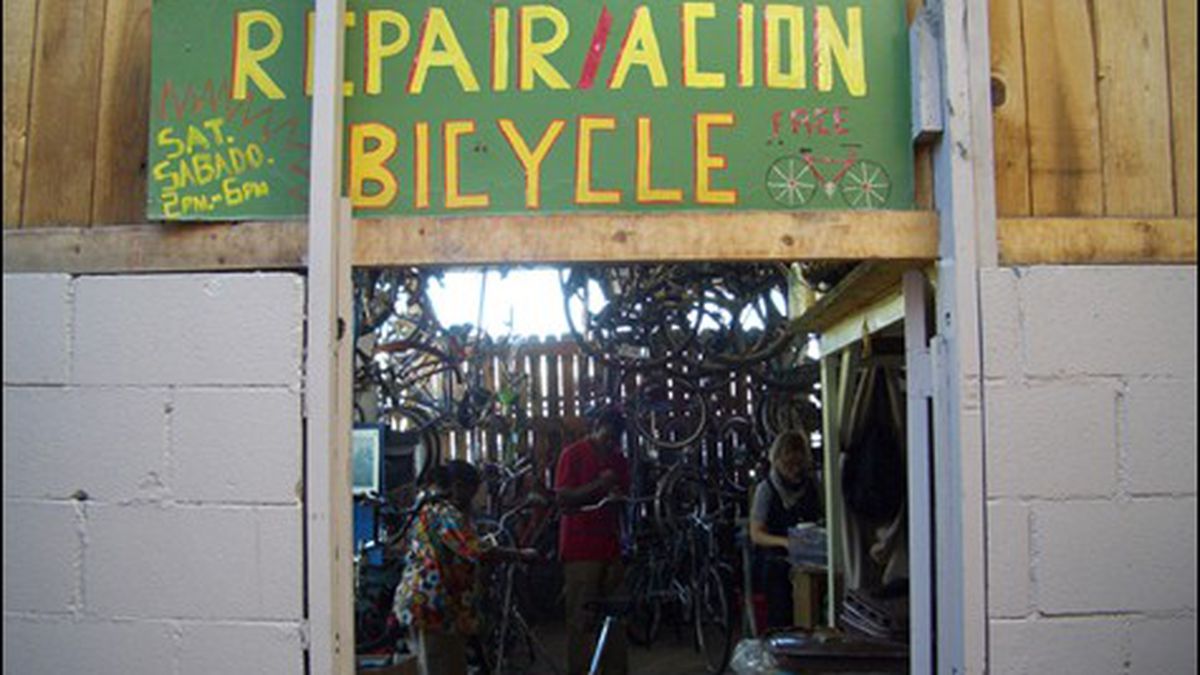 Low-income cyclists can fix their bikes for free — and build community in the process.

Bike culture in the Bay Area runs the gamut, from high-performance racing bikes to hipster fixies. Keeping a bike can be an expensive hobby and, as with cars, some people use their bikes as an extension of their personal style.

At ColectíVelo, a community bike shop in East Oakland, bicycles are still valued for their primary purpose: transportation. The shop provides free space and tools, bike repair training in Spanish and English, and access to bicycles for those with low incomes.

On a recent afternoon, Juana Paredes adjusted the gears on a kid-size bike, mounted on a stand. Her hands were streaked with black grease, and her head tilted to the side as she stood back to watch the wheel turn, testing the adjustment.

She said she has worked at ColectíVelo for about five Saturdays: cleaning, opening, and closing the shop. That’s how she earned her first bike.

Paredes’ work-exchange experience is not an exception here — it’s the norm because ColectíVelo operates without the use of money. The shop offers the use of its bike-repair tools, equipment, and space free of charge; but in order to take bikes or parts home, people are asked to volunteer their time and skills to benefit the shop.

The idea for the shop was conceived five years ago, when a public health nurse and her social worker colleagues saw a need for affordable, efficient transportation among the day laborers they served in Fruitvale. They dreamed of a bike shop for them, and for the other low-income residents of the neighborhood. They found a space to launch this dream at the Oakland Catholic Worker, a resource center that mainly serves the large Latino community in Fruitvale. One of its services is providing transitional housing for recent immigrants at its house on International Boulevard. Juana Paredes lived there when she moved to the United States from Mexico, and that is how she found out about ColectíVelo.

Bikes of every shape and purpose line the walls and ceiling of the semi-open space. Heavy metal shelving holds bike tools and plastic bins of spare parts. There’s a friendly, organized, junkyard vibe to the place.

Kathleen Mills is also here doing work exchange, for a neat little folding bike she is fixing up for her granddaughter. She found ColectíVelo through the Catholic Worker house’s hot meal program. “They gave me some beans and rice, and then I was talking to them, asking did they have job research and stuff like that,” she said. “But then they’re like, no, but we fix bikes! I’m like, oh, great! So, I came around and I started working.”

Mills said she discovered her interest for bicycles at ColectíVelo. “I never knew about bikes,” she said. “I’m, like, almost sixty years old. So, never too old to learn something.”

She has been coming to the shop for five weeks, and has now brought her nephew, Steven Hobdy, into the fold. He is converting an old ten-speed bike into a faster, more efficient single-speed. “I wanted to make something more comfortable, and make me look good on the street, too,” he laughed.

ColectíVelo doesn’t just provide a place to learn about bikes, it also offers a safe space for the community. Juana Paredes has gone there every Saturday for the past year. She said it feels like home, a definite contrast to how she feels outside on the streets because of the violence, drug use, and muggings that take place.

On that particular afternoon, a shooting occurred at the car wash next to the shop, a serious reminder that safe spaces are a real need in this neighborhood. ColectíVelo’s main organizer, Morgan Kanninen, said the shared activity of bike repair helps build relationships in the neighborhood that otherwise wouldn’t exist. “It creates a space where people … feel like they belong,” she said.

Native Spanish and English speakers often work side-by-side, and all signage in the shop is in both languages. Kanninen says this bilingual element makes ColectíVelo special. “They’re super friendly to each other and … everybody adds to the ambience, even if they can’t necessarily communicate directly with words,” she said.

Kanninen believes the no-cash model of the shop’s operations also strengthens the feeling of community. When people want a bike or parts, the first step is sitting down to a meeting to discuss possible work-exchange scenarios. There are some set volunteer tasks, like helping to open and close the shop on Saturdays, but it is up to each person to propose what he or she can do to help the shop. Kanninen said volunteers have built awnings to protect the bikes from rain, constructed tables, painted signs, re-organized the shelves, and even created bicycle art to be hung in the shop.

All of the work takes place within the shop on Saturdays, when everyone is there. Kanninen said this is helpful because people can actually see each other doing the work, and it creates more of a communal atmosphere. “It’s kind of inspiring to see people’s different ideas happen,” she said. “I think it creates a lot more appreciation for each other.”

One of the reasons that ColectíVelo can afford to operate in this communal way is that, unlike other retail bike shops, it has very low expenses. The Oakland Catholic Worker owns its house, and charges no rent to the bike shop. Almost every item in the shop was donated or made by volunteers.

Kanninen said that she occasionally receives cash donations, and sometime people offer money instead of labor for bikes or parts. While she said she appreciates the offers, the shop’s eschewing of money is very purposeful: She pointed out that even sliding-scale systems can contribute to a feeling of inequality among participants. For some, asking to pay at the lower end of a sliding scale can create a “sense of alienation or shame that just does not need to be involved in this bike shop,” she said. “I think it would only hurt the growth of community here, and the real sharing and learning from each other.”

Near closing time, Kathleen Mills started cleaning and putting away the tools, while her nephew Stephen Hobdy put the finishing touches on his ten-speed to single-speed conversion. The conversion has been pretty trendy amongst hipsters, and although Hobdy admitted he does want to look good on his bike, he said he’s mostly concerned with the simple task of getting and from work. At ColectíVelo, people are getting back to bicycle basics: human-powered transportation. And they’re doing it with the very human power of relationships.