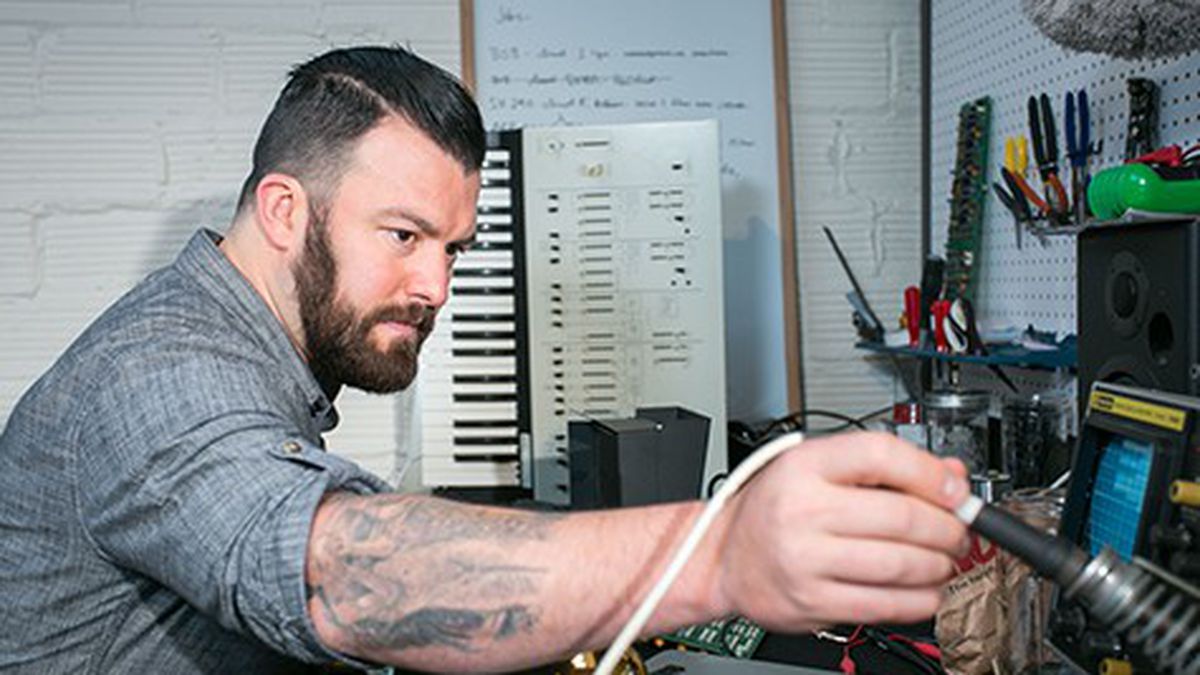 The Fixation that Gripped Local Musicians in 2014

A historical look at vintage synthesizers and their influence on Bay Area music.

Earlier this year, Dark Entries Records, a local label helmed by Josh Cheon, issued Bay Area Retrograde Vol.2, a compilation of local obscurities from the post-punk era. In the liner notes, Cheon noted the players on each song and their instruments. The credits on Los Microwaves “Silent Screamers” list a Roland RS-09, a SH-1000, a Prophet 5, and a DR-55. The fact that no such attention is dealt to guitars, for instance, illustrates the current musical climate’s priorities.

Castle Face Records, the record label perhaps most closely identified with the local garage rock scene, released over a dozen titles in 2014 — half of which prominently feature synthesizers. John Dwyer, label cofounder and leader of the Los Angeles-by-way-of-San-Francisco garage institution Thee Oh Sees, released an all-synthesizer solo album under the moniker Damaged Bug.

Matt Jones, who creates improvisational synthesizer music as Fryborg and runs Castle Face, welcomes the resurgence. Jones, who bought his first synth in 2000, appreciates what he called the “nerdy camaraderie” among fellow players. When asked what he’s been working with lately, Jones sent a long list of gear, including the Oberheim OB-8, Korg Poly Six, Moog Taurus II, Simmons SDS-400. As he said, “If you’re playing a synthesizer, you’re creating a particular sound very deliberately.” He continued, “With the old ones, you’re using a synth to cut parts out of a sound wave and create your own voice.”

Early in 2014, Castle Face released Pow!’s synth-laden Hi-Tech Boom. It’s increasingly common for groups such as Pow!, whose aesthetic straddles punk and garage rock, to augment a typically guitar-dominated genre with synthesizers. The lyrical content, which skewers the local tech industry, also underscores the renewal of the political component long-associated with underground synthesizer practitioners. The instrumentation and protest lyricism evoke the paradox of industrial music in the 1980s, when musicians mimicked the atmosphere of an imagined technocratic, totalitarian future to criticize the modern sociopolitical climate.

Of course, no one wants their passion pegged as a trend. Local synth enthusiasts are quick to point out that the Bay Area has a lineage of pivotal designers and engineers going back decades. Donald Buchla created the groundbreaking Buchla Box as a commission for the San Francisco Tape Music Center in the 1960s; Keith McMillen, a designer of gestural interfaces compatible with MIDI and analog synths, runs Keith McMillen Instruments out of Berkeley; and Dave Smith, who created the first polyphonic synthesizer in the early 1970s, manufactures new analog synthesizers at Dave Smith Instruments in San Francisco. Smith believes that the resurgent interest in instruments he pioneered in the 1970s has been gaining momentum for over a decade.

“There’s been an uptick since 2002,” he said in an interview. That year, he explained, the storied synth company Moog reissued its Minimoog and Smith reintroduced the Evolver, a digital/analog synth hybrid that reprised technology he pioneered in the 1980s with his old company, Sequential Circuits. A number of reissues followed, notably the Prophet series, and Smith currently employs more than ten people to keep up with demand. Smith worked on synthesizer software in the 1990s, but his activity since 2002 reflects and even seems to validate musicians’ preference for older, analog gear.

To Smith, analog synths have concrete advantages. “Musicians say they sit better in the mix,” he said, adding that they look cool in band pictures and, more nebulously, “They have an analog soul.” The high-profile bands and musicians who use Smith’s analog synth reissues — such as the Arcade Fire, Radiohead, and James Blake — seem to agree.

Still, many local synth enthusiasts are skeptical of reissues, preferring to track down the original instruments instead. Aged oscillators and other design components change with time, acquiring what musicians consider to be greater warmth. While preferring vintage gear is partly a reasoned decision, object fetishism and nostalgia also play a role, much as they do in the often groan-inducing preference of record collectors for original vinyl pressings.

Mara Barenbaum, an East Bay musician active as Group Rhoda and as one half of Max and Mara, noted that synthesizers are a long-standing facet of the local noise and electronic community. She attributed the instruments’ recent increase in profile to a confluence of factors. For one, she said, “There was a backlash to … the presence of laptops on stage.” Barenbaum continued, “People are responding to a physical interface that has more sonic possibilities than most instruments, but enough limitations to not feel like they are endlessly fumbling around with some flat and overcomplicated software.”

Barenbaum, like many synth enthusiasts, is also weary of the resurgence. Vintage gear is more expensive than ever, opportunistic resellers abound, and the underdeveloped output of plenty of subpar songwriters is being humored because it has a vintage, analog sheen. It’s a familiar refrain. The purists who’ve grown accustomed to tracking down their own synths in junk shops, maintaining them, and creating music with them for a small cult of appreciators echo the complaints of old-guard rock ‘n’ roll musicians decrying trend-followers as the garage scene reached peak fuzz.

Perhaps the most telling indication of synthesizers’ trending status is the arrival of Waveformless in Temescal Alley. Jason Sole opened Waveformless earlier this month as a synthesizer retailer and repair shop, basically creating a brick-and-mortar location for the internet business he started in 2007. Inside, wall-length patch bays enable each synth on display to connect with a central speaker system. A whiteboard listed eleven current repair jobs, noting technical issues such as triggers, filters, chips, and calibration.

“The people developing these things were visionaries,” Sole said. He explained the historical context of every synthesizer’s initial introduction. He likened the sonic character accrued by a synth over time to the cultivation of patina. The atmosphere is rarefied, and the prices range from $500 to several thousand, but Sole said that his endeavor is as much about commerce as preservation. “I’m not trying to charge eBay prices,” he said. “I want these things to stick around.”

The Party That Never Ends