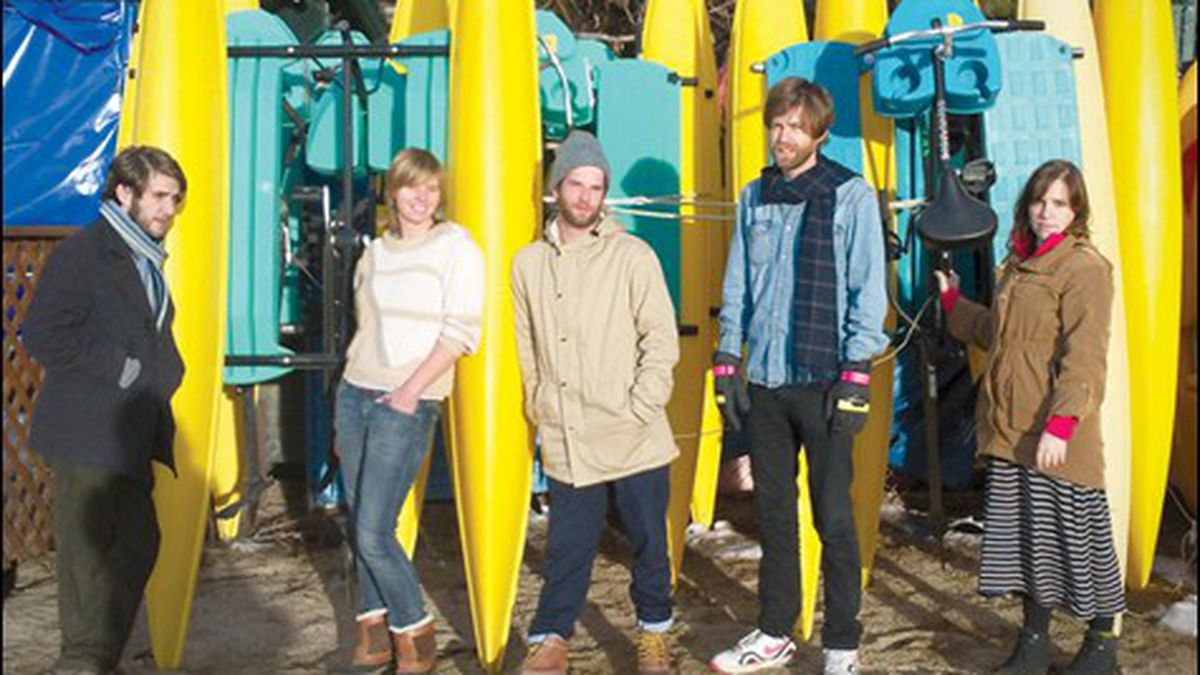 A young singer comes out of obscurity.

For all its fame among musicians, Different Fur recording studio is a relatively unobtrusive presence in San Francisco’s Mission District. Sure, everyone from Primus to Neil Young to Tegan and Sara may have recorded there, but from the outside it’s relatively nondescript. And inside the studio on a typical June day was yet another anomaly: singer Ash Reiter, a sweet elementary school music teacher with a big voice, who likes to curse.

That day Reiter and her eponymous band were recording their yet-unnamed EP, a package of six sweepingly poppy songs due out this September. The summer heat wave was at its peak and the plantains on Mission Street looked more rotten than usual, yet the four Berkeley-based musicians persisted. After all, they had to improve on the jingle, clang, and shimmer of their 2010 home-recorded Paper Diamonds.

“We’re using real drums instead of at-home drums,” Reiter said, sitting on a couch inside the studio and slowly picking gumball-sized black cherries out of a blue and white porcelain bowl. She placed the pits and stems in a shot glass, watching as the studio technician angled a microphone over an upright piano, just so. Everyone was hip and well-dressed but not overtly, as if they had accidentally stumbled into a closet full of plaid before journeying across the bay.

Reiter started playing music in 2005 during her senior year at UC Santa Cruz. She spent the next couple years playing house shows and cutting lo-fi recordings. The singer discovered her crooning capability thanks to a more formally trained roommate, who would lead Reiter in vocal exercises. Under the roommate’s tutelage, Reiter learned to take advantage of her unusually high range. She became a first soprano in the UCSC choir, started playing her aunt’s acoustic guitar, wrote some folk songs, and began the process of making Ash Reiter more than just her own name.

Reiter has worked with the current lineup of musicians for about a year, and turned it into a strongly-knit, familial, somewhat incestuous group. Brothers Scott and Drew Brown play bass and guitar respectively, and Reiter and drummer Will Halsey are dating. How’d they meet? Craigslist.

“I was struck by how pretty her vocals were and how interesting of a singer and songwriter she was,” Halsey said of their first encounter. For his part, Drew Brown had seen Reiter performing a while back and was instantly drawn to her music. “I really liked it; she reminded me of Feist or Cat Power,” Brown said. “I kind of asked them if I could join the band and I was playing with them two days later.” When Reiter was looking for a bassist, Drew Brown suggested his brother Scott, fresh from studying music at University of Michigan, Ann Arbor. The rest is hip-shaking history.

The group’s many intertwining relationships helped Reiter get out of a solitary songwriting rut. She used to write the songs on her own, labeling herself as primarily folk. Thanks to collaborating with Halsey, Reiter began to evolve into a more pop-like sound, hoping to up the energy level at shows. Reiter and Halsey began to work out basic sketches of songs and then bring them to practice for the brothers’ feedback. Reiter said this creates a more cohesive sound than piling on various instruments after a late-night writing session all alone.

“The music doesn’t feel as crowded anymore,” she said. “We’re more conscious of where parts are going.” Ash Reiter has since gained momentum, regularly performing along the West Coast, throughout the Bay Area, and even at SXSW this past March. Reiter’s students thought she was pretty much on the level of Zooey Deschanel when she told them about the music festival.

“They were like, ‘Will you tell them about us?'” Reiter said, explaining that her students wanted to catch a little trickle-down fame.

Well, that isn’t happening yet. But even among its more-famous peers, Ash Reiter stands out with its high-energy performances. Collectively, the musicians have a clear pop sound and a playful vibe, akin to Tilly and the Wall or Architecture in Helsinki. More importantly, Ash Reiter has substance, both in terms of her musicianship and the depth of her lyrics. She’s a teacher, after all. But most of her songs are upbeat.

“I got tired of listening to sad bands; I’m just not interested in listening to that,” Reiter said. “I’d like to see something that makes me dance. I made the effort to go out.”

She added that one can never underestimate the importance of atmosphere. “It’s like when a musician says, ‘Shh, I’m about to play the cello.’ I got hushed like twice in the last week,” Reiter said, her voice getting louder. “That’s my biggest pet peeve — when artists shush you. I once heard an artist say, ‘Shut the fuck up, you don’t have to be here if you don’t want to.’ I was like, ‘I would leave, but I’m performing.'”

Yet, no one was hushed a few days later on June 23 at Ash Reiter’s performance at the Temescal Street Cinema; not even an older man who danced directly in front of the band with a fifth of Jack Daniels tucked into his New York jacket.

“Ladies and gentlemen, you are listening to these people and they are cool,” the man, who said his name was Keith, announced, stealing Reiter’s microphone. “Wait a minute! I dig the drummer — he’s cool. And so am I.”

He stepped away and the band started up a new song, standing in a tangle of cords on a sidewalk at 49th and Telegraph. The audience, quiet at first, began to get into the sweet summer sound as Keith continued getting down, sticking his ass in the air and flailing his arms in worship to the speakers.

A large part of Ash Reiter’s performance appeal is the band’s appearance, even if the band members seem understated when they’re offstage. Reiter set out a piece of cream-and-blue-velvet fabric with their album Paper Diamonds and a white leaf-like frame announcing “CDs $10 buttons FREE please take one.” And the charm went past the merch. Bassist Scott Brown sported sunglasses despite the fact that it was 8:30 p.m. and dusk had already set in. He took intermittent swigs from a Coke bottle and dangled a cigarette during the final song. Reiter looked like the coolest teacher on the schoolyard, wearing a brown snakey dress with a skinny leather belt and fedora.

But what really draws the listener in is Reiter’s voice. She sounds as though she’s barely able to contain herself, a voice deep inside that took her roommate to unearth. Her ability to blend with the band is uncanny, especially when Halsey chips in from his drumming stool. One can’t help but wonder how often they sing together at home.

The band showed its resolute devotion to the East Bay in that night’s encore, “Oakland,” complete with plenty of whoas, ahs, and doos.

With a melody so catchy, Ash Reiter won’t be obscure for long.

Update: A previous version of this article misspelled drummer Will Halsey’s name.

Tom Petty and The Heartbreakers in Berkeley

Mamas, Don’t Let Your Babies Grow Up to be Golden Bears

Kudos to the ‘Chronicle’ For Covering Cannabis Science!