Richmond Police Chief Chris Magnus and Terrance Cheung, the chief of staff in Supervisor John Gioia’s office, were married in a ceremony that took place among blooming flowers in the terraced amphitheater at the Berkeley Rose Garden over the weekend. After the small ceremony, the newlyweds held a reception for about 250 people at the Richmond waterfront restaurant Salute’s.

Magnus and Cheung form something of a political power couple as was evidenced by some of the guests at the reception. Among the well-wishers were some of the heaviest hitters in the East Bay, including Congressman George Miller, state Senators Loni Hancock and Mark DeSaulnier, Assemblywoman Nancy Skinner, Contra Costa Supervisor Gioia, Berkeley Mayor Tom Bates, Richmond Mayor Gayle McLaughlin, and most of the city’s councilmembers. 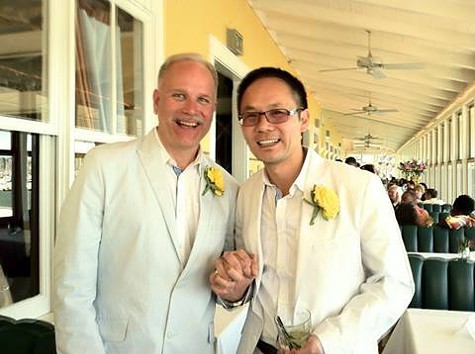 Despite the big-name guest list, the wedding and reception were simple and elegant, which was in keeping with the couple’s low key style, said Richmond Police Captain Mark Gagan. “You would look around at some of the guests here and expect the couple to be a bit pretentious,” Gagan said. “But I don’t think I know two people who are more modest then Chris and Terrance.”

Modesty aside, the two men have made considerable contributions to the communities they work in. As Supervisor Gioia’s chief of staff, Cheung has worked tirelessly on the development of the Ryse Center, which offers numerous resources and organizing opportunities for troubled youths in West Contra Costa County. He has also worked on the development of a one-stop service center for the formerly incarcerated that offers assistance with housing, employment, education, counseling, and medical resources for those who are struggling to get a footing after being released from prison. He is currently working the development of the West Contra Costa Family Justice Center, which provides counseling, legal and support services to the victims of domestic violence.

Magnus’ eight years as Richmond police chief have seen a sustained reduction in violent crime that has rarely been matched in other cities that have experienced seemingly intractable violence related to gangs and chronic unemployment. When Magnus first became chief in 2006, Richmond was regularly rated as one of the most violent cities in the United States. Now, the city’s crime rates are at their lowest in 30 years, which is the result of Magnus’ community policing programs, which include forging strong bonds with community members, church leaders, and young people. The result has been safer streets and renewed interest in the city by businesses.