.The Death of Doctors Medical Center

If Contra Costa County doesn't save the San Pablo hospital, low-income residents, people of color, and seniors will suffer disproportionate impacts — and for some, the results could be fatal. 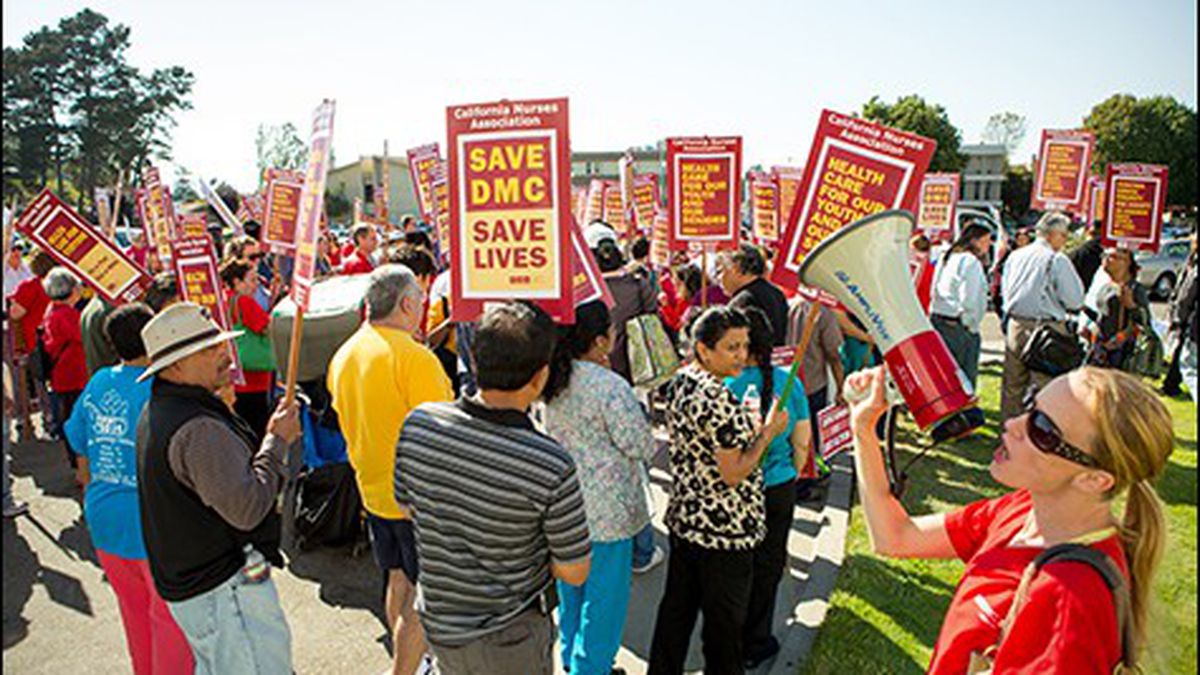 Within the span of just three days last week, Maria Sahagun, a registered nurse at Doctors Medical Center in San Pablo, saw five patients with life-threatening emergencies. Two had suffered heart attacks, two had had strokes, and one was in anaphylactic shock. “Our community is very, very sick,” she said. “And we are the only option for these patients.”

Those five patients pulled through, but next week, West Contra Costa County residents experiencing similar emergencies will have a much lower chance of survival, according to Sahagun. That’s because, on August 12, Doctors Medical Center (DMC) will shut down its cardiac unit, and county officials will stop sending ambulances to the cash-strapped public hospital, which serves primarily low-income people. Patients clinging to life could have to travel significantly farther distances for the care they need.

News of this dramatic reduction in services came days after the Richmond City Council failed to secure funding for the hospital from Chevron as part of the oil giant’s controversial refinery “modernization” project. Chevron is providing a $90 million community benefits package as a condition of its newly approved project, but DMC was left out the package entirely — a huge missed opportunity, according to hospital advocates. DMC may soon have to shut down completely.

“This is so unreasonable and so inhumane, I can’t even wrap my brain around it,” said Sahagun, a 43-year-old Richmond resident and emergency department nurse. “People are going to die. … For the surrounding communities, it will be catastrophic.”

Currently, DMC is a full-service, acute care hospital with a 24-bed emergency room, a cardiac unit, and a number of other specialty services. A public agency called the West Contra Costa Healthcare District owns and operates DMC, which opened its doors in 1954, then as Brookside Hospital, and now serves more than 40,000 patients per year. The hospital service area includes Richmond, San Pablo, Hercules, Pinole, and El Cerrito, covering more than one-quarter million people. Kaiser Richmond is the only other hospital in the area.

DMC is responsible for nearly 80 percent of inpatient hospital services in West Contra Costa County and nearly 60 percent of the area’s emergency care. The hospital is a critical safety net for people who can’t afford Kaiser or private insurance; in 2013, more than 77 percent of DMC patients were covered by government-funded Medi-Cal or Medicare and an additional 11 percent were uninsured.

Closing the hospital, or significantly cutting its services, will lead to a public health crisis that disproportionately hurts low-income residents, people of color, and senior citizens, according to nurses, doctors, labor groups, and community leaders, who are all pushing for a solution to save DMC. “How can you condemn 250,000 people?” said Laurel Hodgson, a DMC emergency room physician and the hospital’s former chief of staff. “We are desperate.”

The hospital has faced ongoing financial challenges since the 1990s and filed for bankruptcy in 2006 in the face of a $35 million deficit. Since then, it has just barely stayed afloat through a variety of funding sources and loans, but has continued to suffer due to a lack of privately insured patients and low reimbursement rates for its government-sponsored patients.

Then in May, a parcel tax measure that would have allowed DMC to erase its $18 million annual operating deficit failed to pass. A stakeholder group that includes government officials and area hospitals has since been exploring ways to preserve DMC’s emergency services. While hospital advocates have continued to argue that Contra Costa County has the financial ability — and a legal and ethical obligation — to keep the medical center operating in its current form, county officials have said that’s impossible.

“Supporting a full-service hospital is not financially viable,” said William Walker, director of Contra Costa Health Services and health officer for the county. “We’re at a point in time where we’ve basically exhausted all … methods of closing the $18 million gap.” Walker, who is leading the stakeholder group, said the county is considering two downsized alternatives — a “streamlined hospital” with a limited number of beds and an emergency department, or simply a standalone, “satellite” emergency room.

With the initial reduction in services going into effect next week, DMC’s emergency department — which won’t be getting ambulance visits anymore — will remain open for walk-in services and continue to receive patients transported from nursing homes. Kaiser Richmond has a smaller emergency department than DMC, is often inaccessible to non-Kaiser members, and lacks a number of specialty services, like cardiac surgery.

Without a cardiac unit at DMC, local heart-attack victims will have to go to Oakland, Concord, Vallejo, Marin County, or elsewhere. “If you have to go to Alameda County and the traffic is bad, it could take forever,” said Seung Choo, a DMC registered nurse.

And if DMC downsizes as proposed, the hospital would struggle to treat senior citizens from nearby nursing homes facing life-threatening emergencies, Hodgson said. “Do you know how many nursing homes we have here and how many times if they hadn’t been two minutes away, we wouldn’t have been able to save [the patient]?”

The potential for downsizing or closure has created a lot of anxiety for nearby residents. “It’s frightening,” said Kathy Magann, an eighty-year-old Pinole resident who suffers from a heart condition and has on multiple occasions ended up at DMC, which is ten minutes from her home. “It could easily be the difference between life or death.”

Furthermore, the California Nurses Association, the union that represents the hospital nurses, has argued that operating DMC as a standalone ER could violate state law requiring emergency facilities to offer other hospital services that are necessary to accompany an ER, such as intensive care.

“You can’t have somebody being treated for an emergency situation and then not have the ICU available for them,” said Richmond Mayor Gayle McLaughlin, who has advocated for saving the full-service hospital.

In response to the potential closure, the nurses’ union has also filed federal civil rights charges against the county and the healthcare district that owns DMC alleging discrimination and seeking injunctive relief from the federal government to stop the shutdown. Each year, the county spends about $13.5 million to support Contra Costa Regional Medical Center, a county-owned hospital in Martinez, about sixteen miles east of DMC. But according to the union’s analysis of hospital data, Contra Costa Regional Medical Center’s patient pool includes a much smaller percentage of African Americans than DMC’s: In 2013, just 15 percent of the patients at the Martinez hospital were African-American, compared to 35 percent at DMC.

“When we see hospitals close in communities of color, we know it’s discrimination,” said Carol Sims, a DMC nurse who has been working at the hospital for more than fifty years. “I’m heartbroken because I realize the impact this will have on the community. We’re not a separate county. We are one county.”

Richmond and San Pablo are plagued by a number of health disparities as well. “We … have the highest rates of asthma, respiratory illnesses, and heart disease [in the county],” McLaughlin noted. In addition, people sixty years of age or older made up 62 percent of patients at DMC in 2013, compared to just 19 percent in Martinez.

The union has also pointed out that Contra Costa County is projected to see an increase in property tax revenues of more than $19 million this year, according to new data from the county tax assessor — meaning officials have no excuse not to save DMC.

In June, the Contra Costa County Board of Supervisors voted to table a proposed sales tax that would have helped bring funding to DMC. The supervisors agreed to loan the hospital $6 million to keep it open this summer with an annual interest rate of 5 percent.

Supervisor John Gioia, who represents West Contra Costa, noted the county has its own $20 million deficit and argued that the union has mischaracterized the tax revenue opportunities, as anticipated increases were already incorporated into the 2014-15 budget to meet rising costs. “We keep pulling rabbits out of a hat to keep the hospital open, and finally there are no rabbits left,” he said.

Given the current funding crisis, he said, his goal is to “serve the greatest public need and try and salvage what is most important for the community.” That means, he said, finding a way to sustain a standalone ER. “At a minimum, we need the emergency room beds.”

The Richmond City Council last week adopted a resolution urging the county to save DMC as a full-service hospital by integrating it into the county health services system. But the council did not pass a motion that would have required Chevron to devote an additional $27 million to the hospital as a condition of approving its refinery project. Only Vice Mayor Jovanka Beckles and McLaughlin supported this proposal.

“It’s a lost opportunity,” said McLaughlin, arguing that the oil giant has the means to support DMC and noting that there are many public health risks associated with the refinery. “Chevron has been known to have these explosions, fires, leaks. Every few years, something happens. … We want an emergency hospital nearby to protect the community and to protect the workers.”

City Councilmember Tom Butt said that while he supports the concept of Chevron aiding DMC, the funding wouldn’t have come soon enough through the oil company’s benefits package. And he said the city had concerns about whether it could legally require Chevron to fund DMC as a condition of approval. “It would’ve been quite clever, but the constraints are too many.”

He added of the possible closure, “It’s a terrible situation. There ought to be a way of doing it, but everywhere you look, the money is not there.”

Chevron spokesperson Melissa Ritchie stated in an email that the company also believes that it would have been illegal for the city to require Chevron to fund DMC as a condition of approving the refinery project.

Richmond’s city manager and planning director both did not respond to requests for comment. Neither did DMC and West Contra Costa Healthcare District officials.

Next ArticleMid-Week Menu: Swan’s Marketplace Gets a Full Bar, Curbside Creamery Opens Its Brick-and-Mortar, and a New Uptown Lunch Spot Hits the Scene