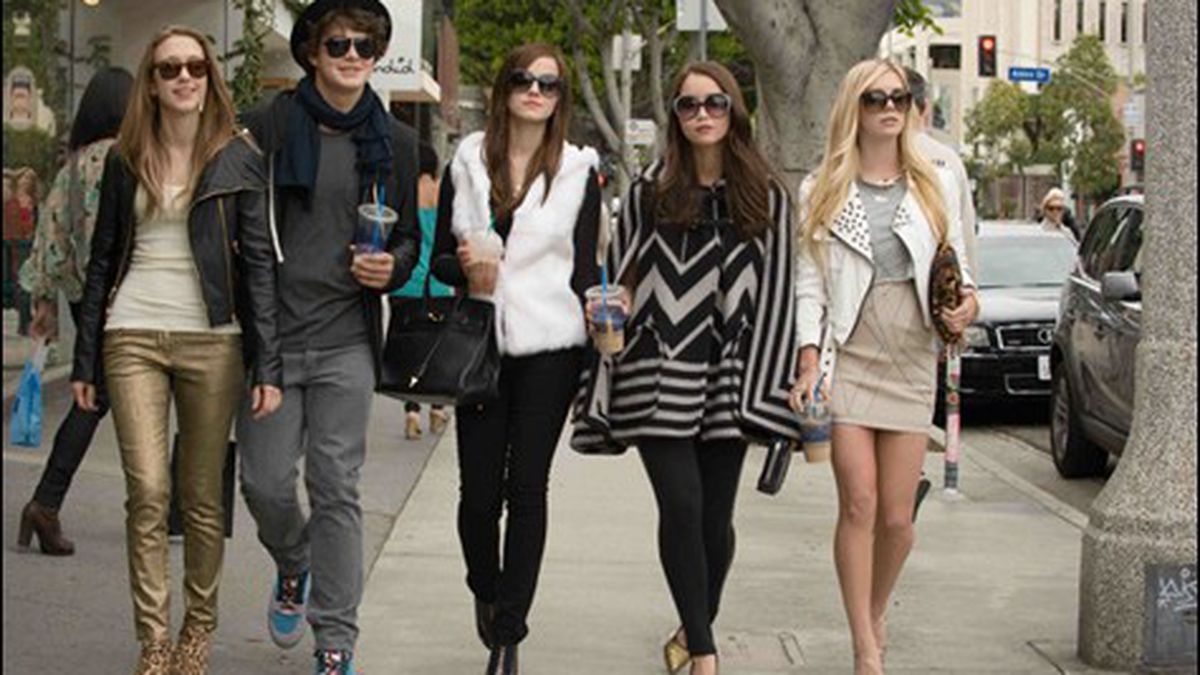 With the above in mind, it’s clear that The Bling Ring — a combination true-crime story and comedy of manners about a clique of suburban Los Angeles teenagers breaking into celebrities’ homes to steal their high-fashion clothes — is very much in Ms. Coppola’s comfort zone. But that doesn’t prevent it from being one of her best films, mainly because of the writing. Coppola adapted the screenplay herself from a Vanity Fair article with the witty title “The Suspects Wore Louboutins,” excerpted from a book by Nancy Jo Sales.

Christian Louboutin, Jimmy Choo, Manolo Blahnik, Prada, Ungaro, Hermès, Alexander McQueen, Gucci. High school student Rebecca’s (Katie Chang) head is swimming with luxury clothing and shoe brands, alongside showbiz gossip and routine adolescent tribal issues. Nothing unusual about any of that, except that Rebecca and her new-kid-in-school friend Marc (Israel Broussard) — together with Nicki (Emma Watson), Chloe (Claire Julien), Sam (Taissa Farmiga), and a few other kids — take the combo of excessive consumerism and idol worship to dangerous new levels by jimmying into their favorite stars’ houses when the stars are out of town, “going shopping,” then displaying the swag on social network sites. It’s a ripe subject for everyone involved. Commentators can moan about the materialistic emptiness of modern culture. Author Sales can bring up such topics as economic inequality and peasants storming the palace of Versailles. Movie audiences out for a thrill can gape at the opulence of Paris Hilton’s many rooms of stuff (they’re Hilton’s real rooms, in her actual house, and Hilton even plays herself in a cameo). Fashionistas can slobber over the expensive merchandise. The actors can beef up their filmographies with something vaguely controversial. And writer-director Coppola can simultaneously glory in her characters’ exploits and preside over their downfall. The dialogue is as bitchy/brainless as we could ever hope for. Crime-movie enthusiasts will of course pay close attention to the kids’ motives, their m.o., and their spectacular lack of affect. They’re not pros and don’t care if they get caught (they post everything they do), but they’re smart enough to use gossip outlets to find out who’s going to be away in Las Vegas on a given night. It looks like fun, romping through designer mansions at midnight, and besides, Rebecca and her friends have never been spanked, so when they get busted they’re truly surprised how serious it is.

It might have been worthwhile to show just a slice of the other side of the Bling Ring’s game, other than the brief appearance of Ricky (Gavin Rossdale), the lowlife fence the kids use to lay off the unwanted schmatta. These no-sweat thieves come from upper-middle-class homes themselves, but in their minds they’re entitled to the same clothes and shoes they see on the tube. Someone hungrier could turn around and rip them off, but naturally that would wreck the scenario. The idea of fresh-faced, attractive teens from well-off families becoming felons for ridiculous reasons is tantalizing enough, and Coppola milks it for what it’s worth. Irony abounds.

All the actors handle their parts expertly, especially Broussard as Marc, who likes to lounge around in high heels and who tries, in vain, to put his crimes in some sort of perspective. The cast is completely believable as spoiled brats who can never get enough. Fantasy triple bill: The Bling Ring, Harmony Korine’s Spring Breakers, and a movie that played the recent Frameline37, He’s Way More Famous Than You — a triple dose of publicity-crazy decadence from varying angles. Sly Coppola has her cake and eats it too with this one. Next time, she should try something completely different, maybe the life story of one of the sweatshop workers who sew all those lusted-after threads. Couldn’t hurt.