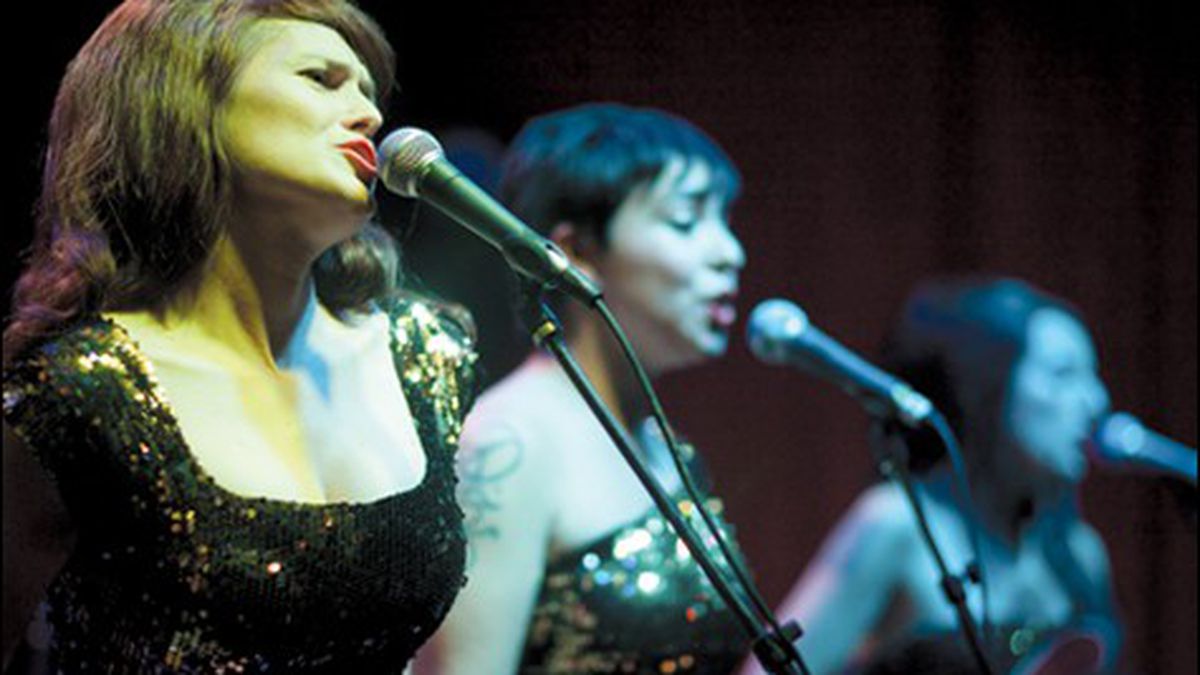 Vintage suits and high, teased hairdos are just part of the band's appeal.

It was a strange night at San Francisco’s Rickshaw Stop. Conversations in the women’s bathroom revolved around the Giants. Conversations on the dance floor centered on menstruation. And the lineup was odd, to boot: Los Angeles-based Afrobeat band Fool’s Gold, supported by groove-rock opener The Soft White Sixties. Sandwiched in between them was a band whose members donned vintage suits and matching sequined dresses. Part girl-group, part surf rock, part soul revival, The Bitter Honeys represented a nostalgia-based trend that’s taken hold nationally and percolated into the Bay Area music scene. Like the similarly themed Hot Toddies, they combine salty, contemporary lyrics with a familiar template — done well enough to equal or surpass their antecedents. The Bitter Honeys have it down pat. They’ve already completed a mini West Coast tour and landed a spate of good billings, less than a year since the group’s inception.

Friday’s gig at the Rickshaw Stop was the Honeys’ ninth show to date. The five band members coalesced the way rock musicians did back in the Sixties and Seventies. They were all friends of friends who knew each other from around the way. They went to the same shows and played in the same garages. They all collected obscure records and fetishized old, rare stuff. Even their hairstyles seemed apropos: guitarist Ryan Beebe sports muttonchops; singer Erica Johnson and bassist Sara Gambina-Belnap wear high, teased ‘dos that could almost be baby beehives. When the band members came together with the idea of making a five-piece throwback outfit, they already had the accoutrements in place.

Thus, they attracted a medium-sized crowd to the dance floor on Friday. The Honeys kicked their set off with an original called “Act Right,” which required Sara, Erica, and lead singer Cris Armijo to split duties on some three-part harmony choruses, while drummer Mouse Menough hit a solid backbeat and Beebe ground away at his axe. The setup was remarkably ascetic for a soul band: guitar, bass, drums, two shakers, voice. Even the harmonies were spare, rarely straying beyond a major third — except on an extraordinary Samantha Jones cover called “Today Without You.” Johnson said they’d ultimately like to add horns and keyboards, creating a much fatter rhythm section.

For now, though, the small group seems a little more realistic. If nothing else, it allows for a lot of tacit information exchange onstage. The three singers move together in a way that seems choreographed, and Johnson says that at this point, it’s kind of a “band intuition” thing. They also know how to thwart minor disasters. After the first song, Beebe gestured frantically to the sound guy. “More vocals!” someone shouted in the audience. Johnson smiled accommodatingly. “Could we have a little more guitar in this monitor?” she asked, pointing stage-right to Beebe. “And a little more vocal in that monitor?” From an audience standpoint, it was hard to notice the difference. But Beebe was appeased.

Armijo is the Bitter Honeys’ true secret weapon. Whereas Johnson and Gambina-Belnap sound pretty and airy, she’s the belter in the group. She’s the only one who can truly manhandle a ballad like “Can’t Let Go,” which requires a genuine mix of anger, obsession, and regret. Best known for former roles in Bart Davenport Band and Outline Kit, she appears to be entirely self-made. She also designs the group’s apparel. Johnson and Gambina-Belnap aren’t quite as strong — they falter a little on the harmonies for “Teenage Years” — but they fit the group’s image quite well. And having a female bass player increases the Honeys’ appeal by a factor of six.

Which explains why they went over so well at the Rickshaw, even faced with a rather non-participatory crowd. “How many people have ever been in love?” Johnson asked to introduce “Can’t Let Go.” Folks gazed back at her perplexedly. One guy raised his hand. “This guy here?” Johnson asked. “He’s the only one who’s ever been in love? The rest of you are too cool?” Apparently, she’d hit the mark. There was a decidedly clear division between the fans who had come specifically for Bitter Honeys and the ones who had come for headliner Fool’s Gold. Overall, the Honeys’ fan base was sleeker. The guys were skinnier. The girls had a more retro fashion sense. The two couples that danced knew how to do an authentic mashed potato. In contrast to their world music counterparts, they were quieter, more bemused, less likely to heckle the band or start a dialogue between songs.

And yet, by time the Bitter Honeys reached their penultimate tune — an Exciters tribute called “He’s Got the Power” — they’d clearly garnered a few more fans. The Honeys are a weird group. They’re more sincere and less self-consciously clever than some of their peers in the indie scene, but still cheeky in their own way. They sing a lot of traditional love ballads, mixed with a song about social paranoia (“I’m Afraid They’re All Talking About Me”) and a couple tunes about co-dependent relationships. At this point, the band still incorporates a lot of covers, but members try to steer clear of the obvious. Johnson says that, ultimately, they’d like to do all original material.

The crowd applauded heartily on Friday, even as the lights went up and world music cued on the stereo. Talk in the women’s bathroom line turned to “those surprisingly good openers.” For a relatively unknown indie band, it was an auspicious beginning.