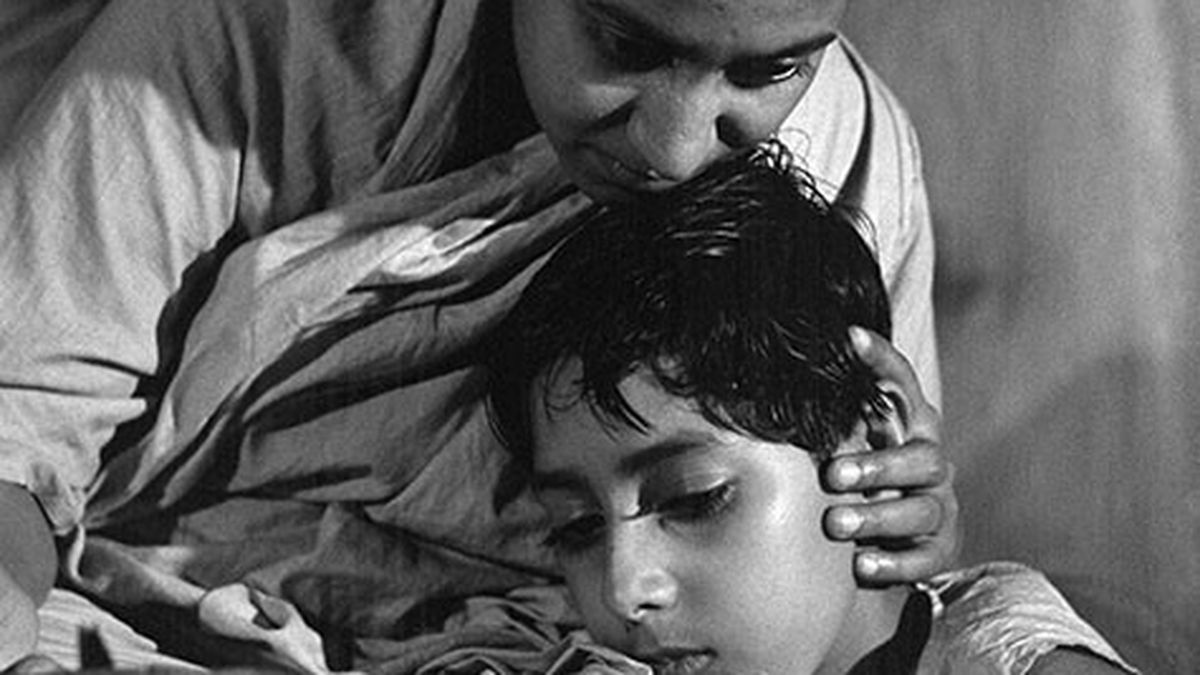 The Apu Trilogy: Rich and Unforgettable

The gentle tranquility is inviting. Almost all the sounds enveloping the characters in Pather Panchali are natural: a breeze in the bamboo forest, raindrops on the roof, birds calling in the trees, the soft cries of Chinibas the sweets seller making his rounds. Only the distant chuffing of a passing train disturbs the hum of the peaceful community of Boral in West Bengal, India. Writer-director Satyajit Ray’s first film (1955) is the ideal village picture, a miniature panorama of humanity with a few well chosen characters whom we understand immediately, instinctively, at first glance — a poor family with typical hopes and dreams.

Ray reportedly made Pather Panchali (aka Song of the Little Road) as his tribute to Italian Neorealism and the oeuvre of Jean Renoir. A true dedicated amateur, Ray was working as an illustrator when he adapted the screenplay from Bibhutibhushan Bandyopadhyay’s novel, relying on his own drawings to guide a cast of non-actors in a naturalistic setting. Funding was scarce and the film took years to complete, but Ravi Shankar’s classical Indian music score and Subrata Mitra’s luscious 16mm black-and-white cinematography helped to cast an indelible spell.

At first we imagine the movie to be about Durga, who steals fruit for Auntie from a neighbor’s yard and has romantic yearnings, but little Apu leaps to the forefront with his inborn curiosity. We see the villagers — the fat merchant, nervous schoolteachers, the mean neighbor woman, the brass band that blares its rendition of “It’s a Long Way to Tipperary” — through his eyes. Father goes out on the road looking for work while mother stays home, worrying. A storm rakes their ramshackle house. They all spend a large amount of their time making careful arrangements for something to eat. The rhythms of their lives are calm yet insistent. In Ray’s gorgeous compositions, the family’s fate plays itself out as ritualistically as the legends of the gods in the Hindu religious stage play at the village festival, and there’s a lingering tenderness, as if everything is part of an all-embracing, all-knowing plan.

Pather Panchali established the Kolkata native Ray (1921-1992) as India’s most revered master filmmaker, with an international popularity — the title was shown at the first San Francisco International Film Festival in 1957, where it won Golden Gate Awards for Best Picture and Best Director. Ray’s movies went on to inspire generations of Indian filmmakers as well as such auteurs as François Truffaut, Abbas Kiarostami, and Wes Anderson. But over time, his reputation in the West grew more obscure, mostly because audiences had a hard time finding his work. At one juncture, the original negatives of the Apu movies were lost in a fire. Now all three installments of the fictional Apu’s life story have been painstakingly restored to their earthy beauty under the auspices of Janus Films, in new prints to be screened in 4K digital at Landmark Theatres in the Bay Area.

First up is Pather Panchali, then the 1957 Aparajito (aka The Unvanquished), the story of Apu’s schooldays in Varanasi and Kolkata; and The World of Apu (Apur Sansar) from 1959, in which he experiences the joys and sorrows of adulthood. All three are notable for quiet, understated scenes, full of powerful emotion, with the weight of the world reflected in Apu’s facial expressions. For audiences used to noisy, urgent storytelling, Ray’s style may take some getting used to, but slow down and drink it in — the rewards are rich and unforgettable.

The Apu Trilogy starts Friday, June 12 at Landmark’s Shattuck in Berkeley and the Opera Plaza Cinema in San Francisco, with all three titles screening at various daily showtimes for one week only, through June 18. LandmarkTheatres.com

NUHW Vote Is a Bloody Nose for the Labor Left